You might wonder what writing and theatre students do after they attend UVic. It’s a fair question, and one that many students themselves grapple with. For a group of recent grads (together with some students still at UVic), the answer was to start their own company.

Vino Buono,a small, Victoria-based theatre production company, was established last summer. In January 2017, its board of UVic students and alumni announced the program for their inaugural season. The company’s goal is to provide a platform for underrepresented stories and support young, local artists. Their mandate is to show that emerging voices are vital to the theatre community, and all four plays selected for their 2017 season are penned by writers who fit that vision.

Vino Buono’s first installment, Blind Portrait, was staged during last semester’s exam period, and I was locked in my apartment studying; however, I caught their second production, a double bill of The Fitting Room and Snowfrog (meaning both plays were performed on the same night) during its run from May 10 – 12. The venue, Intrepid Theatre Club, a black box theatre with 50 seats, is well-suited to small productions like this that draw a full house. 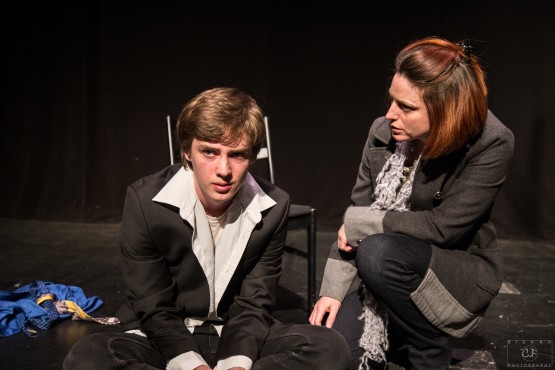 The Fitting Room, written by Ellery Lamm and directed by Anna Anderson, played first. It’s a sad comedy that revolves around characters connected to thirteen-year-old Noah, who has recently died during a dangerous dare proposed by his best friend Harvey (Brendan Elwell). Oh, and the whole thing is set in the same department store fitting room.

This conceit, and the creativity of the script and direction to make it work, is the reason theatre continuously delights me. It’s implausible that Harvey and his mother (Crystal Loszchuk) would duck in and out of the same fitting room cubicle as Noah’s sister Hanna (Sophie Underwood) and two of Hanna’s classmates, but that’s the beauty: figuring out the connections between characters is so much fun, it becomes believable.

Character combinations switch around throughout the play, to pair friends and strangers together equally. Hanna’s classmate and girlfriend Cleo (Renée Killough) comes out to her best friend Sophie (Jessica Lane) in an energetic and funny, if slightly familiar, scene. Harvey’s mother plays tug-of-war with Cleo over a blazer. Harvey apologizes to Hanna, who doesn’t blame him, but doesn’t not blame him either. The tragedy brings out these unique conflicts, which feel deliciously intimate, and the ghostly presence of a rabbi (Alex Judd) adds a touch of surrealism. Interactions between actors occasionally feel stilted or awkward, and I was hoping for a more conclusive ending. But I think that’s the point — an incident like this doesn’t have an end. You just keep on living.

The fitting room walls turned into prison cells for the second show, Snowfrog, written by Kaitlin Ruether and directed by Melissa Taylor. It poses the question of what might have happened if Quebec had separated from Canada after the 1980 referendum, taking place in an alternate reality which has the two nations waging war with one another. I’d forgotten this premise at the play’s start, and it took me a while to catch up, but the single uninterrupted scene is edge-of-your-seat riveting.

Québécois Leanne (Michelle Fortier) has just arrived at a prisoner of war camp, trapped in a cell between the compassionate Zoe (Mary Van Den Bossche), a Canadian, and unsympathetic Quebec anglophone Henry (Michael Bell). The three discuss innocence, politics, and ways to escape, while a voice on the prison loudspeaker system disciplines them and doles out electric shocks via bracelets locked to their wrists.

Their portrayal of pain, and the abrasive buzzing noise that comes with it, is captivating, convincing, and difficult to watch. The violence could have been pared back and had the same effect — without becoming more memorable than the story itself — but all three actors give powerful performances in this experimental drama.

Like The Fitting Room, Snowfrog fulfills Vino Buono’s mandate of being raw, contemporary, and original.