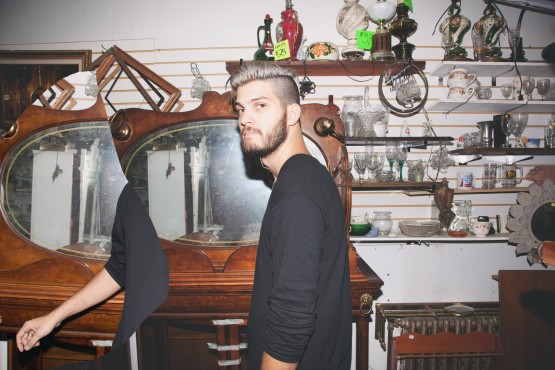 It’s shaping up to be a busy year for Vancouver musician David Vertesi. He hosted the final Sing It Forward fundraising concert in January, released his sophomore solo album, Sad Dad Cruise Ship, in April, and just wrapped up a sold-out cross-Canada tour opening for Said The Whale.

The Martlet caught up with Vertesi as he set up for a show in Edmonton, and chatted about the new record, his work both as a solo artist and in a band, and his plans for the future.

Released on April 22, Vertesi’s latest album is his first solo release since his 2010 debut, Cardiography. In the intervening years, he got married, organized fundraisers for music education, and played bass in the JUNO-award-nominated pop trio Hey Ocean.

With three full-length albums, Hey Ocean was a staple in the Vancouver indie music scene until they announced that they were going on an indefinite hiatus in 2014. For Vertesi, the break gave him the opportunity to rediscover his own sound.

“Everyone needs some time to go off on their own and go travelling and grow as an individual away from the group,” says Vertesi. “And some times you come back and sometimes you don’t.

“We’ll see what happens with Hey Ocean but for the time being we’re all just focussed on that personal exploration.”

Sad Dad Cruise Ship is a departure from the breezy bubblegum pop of Hey Ocean, displaying Vertesi’s musical maturity and growth. The album is a mash-up of styles and influences ranging from synth-drenched electro-pop to slower, atmospheric guitar tracks. Holding it all together is Vertesi’s own distinct voice, intelligent lyrics, and a sense of earnestness that seems to permeate each song.

Despite the musical diversity, the album stays consistent with themes of youth, relationships, and even mortality. According to Vertesi, the cohesion of the message was no accident.

“I think even though the songs were all separate, through the process there were certain themes that really tied things together,” he says. “A lot of it revolves around growing up and realizations you have [that] our time is finite, our supply is finite, our luck is finite, individually and as a society . . . I think those morals are sort of the theme throughout the whole record.”

With the album getting positive buzz, Vertesi won’t be slowing down any time soon. He’s relocating to Detroit with his wife, planning a fall tour, and looking to release music videos to accompany the album. It’s an exciting time for this bassist-turned-frontman, and if Sad Dad Cruise Ship is any indication, Vertesi’s future should be nothing but smooth sailing.