Daylight Savings Time is pointless, and here’s why. 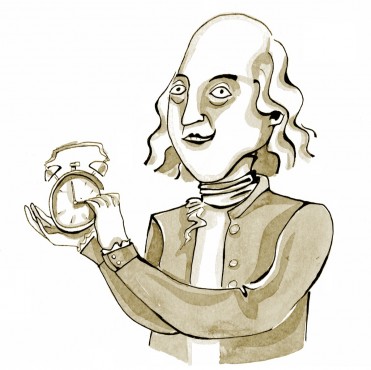 My friend Katherine has one thing to say about catching up  to the sun twice a year: “It’s stupid. The sun should catch up to us.” Making demands from the most important source of energy in the solar system aside, I really couldn’t have put it better myself.

On Saturday night, March 7, many of us groaned, reminded that we’d have to spring our clocks ahead an hour. With students facing early morning classes, this made the upcoming week look a lot more difficult. I was among these poor souls. Soon, Monday morning rolls along and I wake up at 7 a.m., my body screaming that it’s really 6 a.m. Coffee can’t save me from this hell. I drag my semi-conscious self to the bus and mentally prepare for a full day of class, cursing Benjamin Franklin.

It is often said that Benjamin Franklin came up with the idea for daylight savings. He suggested the plan back in 1784, adding the quote, “Early to bed, and early to rise, makes a man healthy, wealthy and wise.” All of Ben’s friends shot his idea down, apparently not falling for his dumb poem or seeing the need to switch their clocks around by 60 minutes. Ben Franklin’s DST idea didn’t come into fruition until the First World War, to save coal for the furnaces during war time. So, daylight savings came from two of society’s biggest embarrassments: war and being cheap.

It’s not all bad, though. For starters, getting to sleep in for an extra hour in the fall is pretty damn great. Many people I know who are early risers, like my roommate, prefer the time change since it forces the sunlight to coincide with their schedules. “It’s beneficial for me,” says my roommate. “In the fall, it doesn’t feel like I’m doing my morning jog in the dead of night, and in the spring, the early sunshine isn’t blaring through my window either.”

Most people, however, don’t share my roommate’s sunny optimism. In a recent article by Jamie Condliffe of Gizmodo, it’s stated that the change in time doesn’t even make us any healthier. It’s said to disrupt our circadian rhythms, and can seriously mess with our moods. The country of Kazakhstan even officially stopped participating in daylight savings in 2005, wisely stating it was for “health reasons.”

I don’t really see the point of DST. It’s disruptive, annoying, and doesn’t make a very big difference. Our society follows age-old traditions that, once thought out, don’t make too much sense. Why not ditch the old rules, and create some new ones? On the other hand, that does sound like the beginning of a dystopian novel.