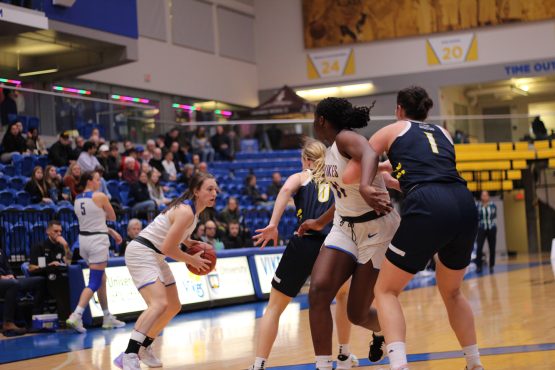 The Vikes basketball programs kicked off their seasons and fans showed their support at Days of Thunder on Nov. 25 and 26. Days of Thunder has typically been the weekend of the season opener, but this year that fell on Nov. 11 and 12, when students were on reading break. Both programs played the Trinity Western University Spartans for the first time this season and played hard with some fantastic highlights from both squads.

While both programs appear to be on opposite trajectories, there are bright spots to be found within each team.

The women are off to a tough start, sitting at 4–6 which includes three losses of three points or less. Their games over the weekend mimicked this storyline to a tee. The women went down early, failing to score a basket in their first four minutes of play.

However, they stormed back, with the Vikes outscoring the Spartans 34–12 in the second quarter. It all fell apart in the second half, with the Spartans chipping away at the score before ultimately taking the lead by 3 points and running out the clock. On the second night, the Vikes went down by 15 in the first quarter, but rallied to make it close in the fourth, losing by only six points in the end.

Ashlyn Day was a human highlight reel in game one, scoring from everywhere. Day finished with 25 points, six rebounds, and three steals with four 3-pointers made. The fifth year guard has been spectacular all season averaging 20.7 points per game along with 5.9 rebounds. In game two, it was teammate Kate Johnson who led the team in scoring with 25 points. Johnson has been averaging 15.2 points, 4.8 rebounds, and 4.4 assists per game.

The men’s program is off to a phenomenal start, sitting at 8–2 with their two losses being by a mere five points. This has led them to be ranked as the number two team in all of USports, only trailing Carleton, who were last year’s champions and have won 16 of the past 20 USports Championships. Their game during the Days of Thunder displayed exactly why the Vikes deserve to be holding that second spot. They dominated the first half in both games, outscoring the Spartans 42–21 and 55–38, allowing them to maintain the lead throughout the second half.

Teammates Ralph, Trent Monkman, and Renoldo Robinson have also averaged double digit points this year. Fifth year big man Dominick Oliveri has also been showing out on the stat sheet, finishing with a double-double on Nov. 26, and averaging 8.2 points, 13.5 rebounds, and 4.1 assists this year. 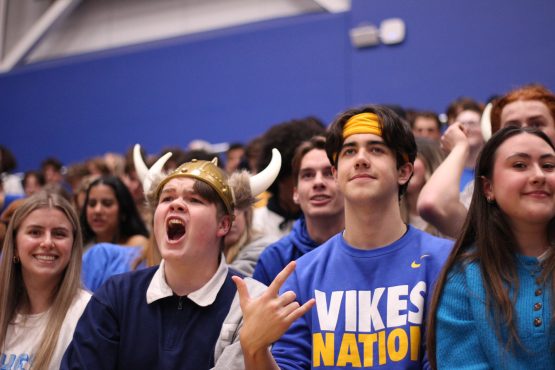 Aside from basketball, Days of Thunder did not disappoint, with tons of fan energy and involvement. Touted as the rowdiest games of the year, the fans brought their A game with many in the Student’s Spirit Section having props of some kind, including viking helmets and a cutout of Michael Jordan’s face. There was plenty of hype with fans cheering hard for the Vikes and jeering the other team and refs. The experience was boosted by the cheerleaders and the band, who performed at stoppages in play. Likewise, Vikes Nation ensured there were plenty of activities and giveaways in between the games to keep fans on their feet.

The Vikes Basketball teams won’t play again until the new year, but they will look to start 2023 in the win column with away games in Regina. Their next home games will be against UNBC on Jan. 13 and 14.