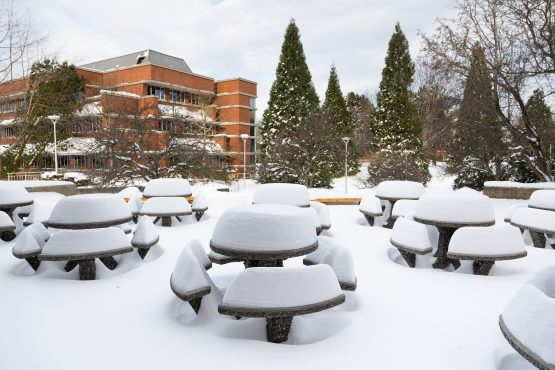 A massive snowstorm wreaked havoc on the Victoria community just days before the start of the holidays. UVic closed its doors and cancelled all in-person exams on Dec. 20, 21, and 23.

For students trying to get home for the holidays, the closures of transit systems greatly affected their plans to return to their friends and families off the island. BC Transit, BC Ferries, and the Victoria International Airport suspended or cancelled almost all forms of transit for days after more than 30 centimetres of snow engulfed Greater Victoria the night before Tuesday, Dec. 20.

According to a 2021 UVic report based on data collected in 2019–2020, around 76 per cent of students enrolled at UVic come from areas outside Greater Victoria or outside Canada. With such a high population of students originating from outside the island, many from the UVic community were majorly affected by transit closures, especially students who had final exams during the last couple of days before the break.

UVic students like David Waller faced many stressors and disappointments in trying to return home for the holidays, and like many others, became effectively stranded on the island after the Victoria airport cancelled or imposed major delays on flights as a result of the snowfall and extreme weather across the country.

Waller planned on flying back home to Halifax on Dec. 21 before the storm caused his flight to be cancelled. Trying to exhaust all of his options, he attempted to book a ferry to Seattle so he could fly back home from the United States. He ultimately decided to discard that idea because of the possibility of disruptions from the airlines and the unpredictability of the weather. It ended up being a good call, as that flight was ultimately cancelled as well.

As a last attempt to get off the island, even if he wouldn’t make it back for Christmas, Waller endeavoured to book one last flight home for the end of December.

“I was supposed to have a flight out on the 29th from Vancouver,” says Waller. “It was direct from Vancouver over to Halifax, but I had more flight troubles with that, so I ended up just not getting home.”
As a member of the UVic track team, Waller recalls that several of his acquaintances faced similar problems.

“There were a handful of us [from the team] who couldn’t make it out on flights and were stuck here at least a couple of extra days,” says Waller.

Luckily, Waller describes the few family members he has in Vancouver and on Vancouver Island that he was able to visit with in lieu of the rest of his family out east. Being able to spend a couple days with his grandfather in Victoria for Christmas, as well as visiting his brother in Vancouver for some quality ski time together, left him in higher spirits.

“It was pretty frustrating being stuck, but I was very grateful for friends and family in Victoria that invited me over for their holiday events,” says Waller.

Unfortunately, for many other students like Waller, the disappointments of not being home for the holidays and the stress of having to make up for missed exams in January will likely linger for a while longer.