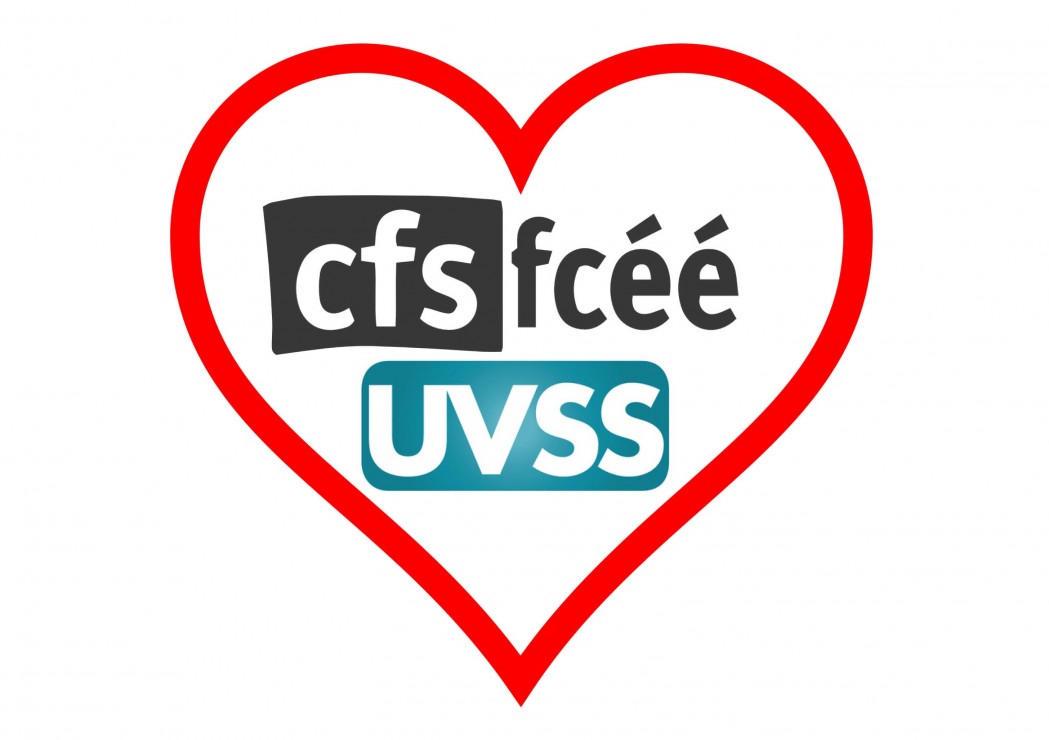 On Nov. 15, 2010, the University of Victoria Students Society (UVSS) began what turned into a lengthy legal battle to withdraw from the Canadian Federation of Students (CFS), a national organization that lobbies the government at the federal level on behalf of member universities. On Mar. 29, 2011, students cast a decisive vote and the UVSS withdrew its membership.

Almost five years later, the UVSS attended the CFS national lobby week in Ottawa from Feb. 3–5, 2016. On Friday, Feb. 5, the Martlet received an anonymous news release that criticized the UVSS for attending.

A student that remains unnamed is quoted as saying, “By participating in the CFS Lobby Week, [Director of External Affairs] Kenya Rogers is condoning violence against workers.”

Obviously, the allegation raises questions: did UVSS know about the multiple issues their engagement with the CFS could raise? If so, was their involvement with the CFS Lobby Week meant to build bridges with some allegedly unsavoury types, or was it simply to use their connections to lobby for UVic student interests? Should the latter even be the case, does the UVSS have the right to take such action without the consent of the student body, members of whom clearly felt outraged at being affiliated with reported union busters and possibly corrupt student tyrants?

UVic finally left the CFS in 2013, two years after the original referendum to leave had passed, when its membership was terminated by CFS-BC, the provincial affiliate which universities must belong to in order to be a part of the CFS national body. UVic students chose to leave for numerous reasons, including exorbitant fees levied on students to belong to a representative organisation which was failing to improve student lives or listen to students, and the CFS’s alleged anti-union labour practices. UVic is notable not for its intent in this regard, but for its near unprecedented success. 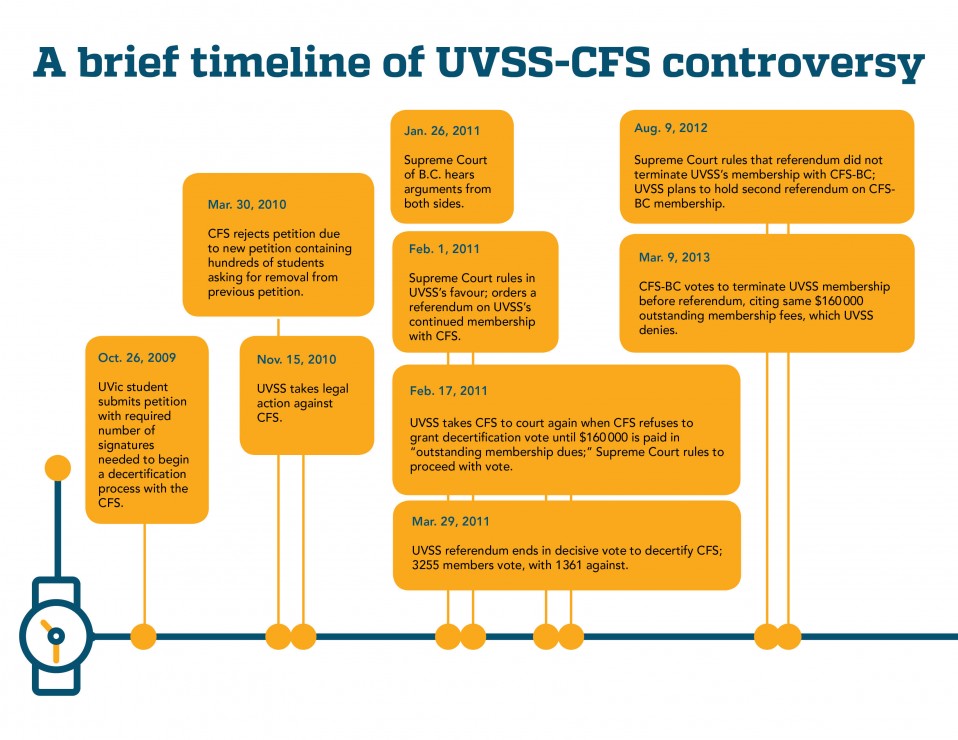 Several Canadian universities, particularly those in provinces other than Ontario or Quebec, have tried to escape the CFS only to have bureaucratic hellfire rained upon their heads. The CFS has brought punitive actions against those who fail to follow to the letter the exit policies laid out in CFS charter documents (sec. 6, if you’re curious), which demand that referenda be tossed for something as menial as a single illegible signature on the required petition.

So, CFS is not pretty. It’s burdened with allegations of corruption, known more for exploiting than representing Canadian students, and allegedly engages in union busting, deliberately hiring non-union employees. For some students, supporting a group which not only ignores but actively works against union activity might be an unacceptable move for the UVSS to make. But the question remains: is that what the UVSS did by attending CFS Lobby Week? Or were they simply using a nasty piece of work to advance their cause?

The Martlet reached out to current Director of Student Affairs Kenya Rogers, who is running for re-election on Mar. 3, for her perspective. Rogers said via email that participating in Lobby Week “developed mostly organically” through discussions with the CFS, as the board saw the CFS’s positions and goals for post-secondary lobbying aligned with their own. “There were definitely lead-up conversations centred around mutual goals before we requested [to participate].”

“As an unaffiliated student union, the UVSS will and does work with any organization — whether student or community — that furthers and defends the interests of UVic students,” Rogers said.

When asked if the UVSS had any qualms working with organizations whose ethics are in question, Rogers said, “We’re just trying to hover above the fray, not take any sides in any ongoing disputes between or within other student organizations, and work in solidarity with as many student unions as we can” to lobby for post-secondary funding.

“We are not concerned with organizational acronyms or past disagreements.”

The Martlet contacted CFS for comment. In an email, Chairperson Bilan Arte wrote that the CFS represents more than 650 000 students in Canada, and that “they will collaborate with any organisation or students’ union who shares [their] vision for accessible post-secondary education in Canada.”

Arte said that Lobby Week attendees met with nearly 200 MPs and Senators who were “highly receptive” to the recommendations brought forward.

A CFS communications representative also provided a list of asks [more here] that were brought to Lobby Week, which included drafting a Post-Secondary Education Act that would help eliminate undergraduate tuition fees in Canada, and re-establishing federal funding for student internships and paid summer employment opportunities — the latter of which was later endorsed by the federal government.

Regarding unions, Arte said the Federation has “a long and proud history of working in solidarity with the labour movement.”

“The CFS is proud to be a union employer and wholeheartedly supports the rights of its employees to Union representation,” she said.

CFS-BC Chairperson Simka Marshall, whose organization is currently in the process of separating itself from the national body, says she understands why the UVSS might participate in Lobby Week, despite the history between the two organizations.

“We understand that the UVSS . . . [has] their own commitments to their own members, so it’s not like we can comment on their actions in participating in that,” Marshall said.

However, Marshall said it seemed like a strange move on the CFS’s part to invite the UVSS, and that by inviting non-members to be B.C. representatives, it undermines the B.C. membership’s decision not to participate.

According to Marshall, CFS-BC declined to attend CFS Lobby Week because of “ongoing labour issues in the national office.”

“I know there’s the fact that the national office has participated in union busting by contracting out hundreds of thousands of dollars of unionized work,” Marshall said. A lack of any financial audit for the past year or written campaign strategy were other reasons why the CFS-BC chose not to attend in Ottawa.

Obviously, the CFS’s and CFS-BC’s relationship is on shaky ground. Camosun College’s Nexus newspaper reported on Feb. 3 that the CFS-BC passed a motion at its 34th annual general meeting to develop a strategy for separating the two organizations, with Marshall quoted as saying the decision came down to “different directions” and “different priorities.”

Former UVSS board members who served when the UVSS went to court with the CFS gave polar opposite responses when asked for comment on the current board’s decision to attend Lobby Week.

James Coccola, UVSS Chairperson from 2010–2011, explained that the UVSS de-federated because it could do everything for its membership that the CFS could, for a fraction of the cost. However, he said that “one thing that cannot easily be replaced is campaigns that require provincial or national coordination,” and so the UVSS attending the CFS Lobby Week is “well within the spirit of the referendum that was held five years ago.”

“I continue to have serious concerns about the democratic structure of the CFS,” Coccola said, “but joining the CFS at lobby days is not the same as re-federating.”

On the other hand, Kelsey Hannan, who served as Director of Finance and Operations at the time of the referendum, told the Martlet over Facebook that attending was a “terrible idea.”

“The fact that board members would even entertain this idea shows how short their institutional memory is,” Hannan said. “We’re talking about an organization that the UVSS had to take to court, not once, but many times, in order to just have them recognize the right of our students to have a legal vote on their CFS membership.” He continued:

I don’t think the current board reps have any idea of literally the thousands of hours that were spent by students in order to have UVic leave the CFS. After CFS-BC let us go, at UVic we achieved something that I don’t believe any other student society in Canada has ever pulled off — which was a clean, unambiguous legal separation of the student society from the CFS.

While it is clear that feelings on the subject of CFS-UVSS interplay run hot among the old guard, the question remains relevant to the current student body more than ever as we prepare to elect another student government. Our only voice as a student body are those we elect, and currently none of the three slates running have any stance on the CFS, or the UVSS’s relationship to them. None of the slates have published explicit labour policies, despite current labour negotiations ongoing on campus, and part of Woke UVic’s platform rides on expanding library hours, which must require union involvement.

Yet every slate mentions their commitment to advocacy and lobbying for student rights. We suppose two questions thus remain: is the undeniable lobbying access worth associating with a group that previous UVic student reps broke ties with over their unethical business practice? And does remaining unaffiliated allow enough distance for ourselves to justify that association as mere political usury, a dirty means to worthy ends? Or should we demand the UVSS be openly critical and take a moral stand, rather than refusing to judge others as we judge ourselves? These aren’t questions for us to answer, UVic students. It’s all for you.

So what’ll it be?