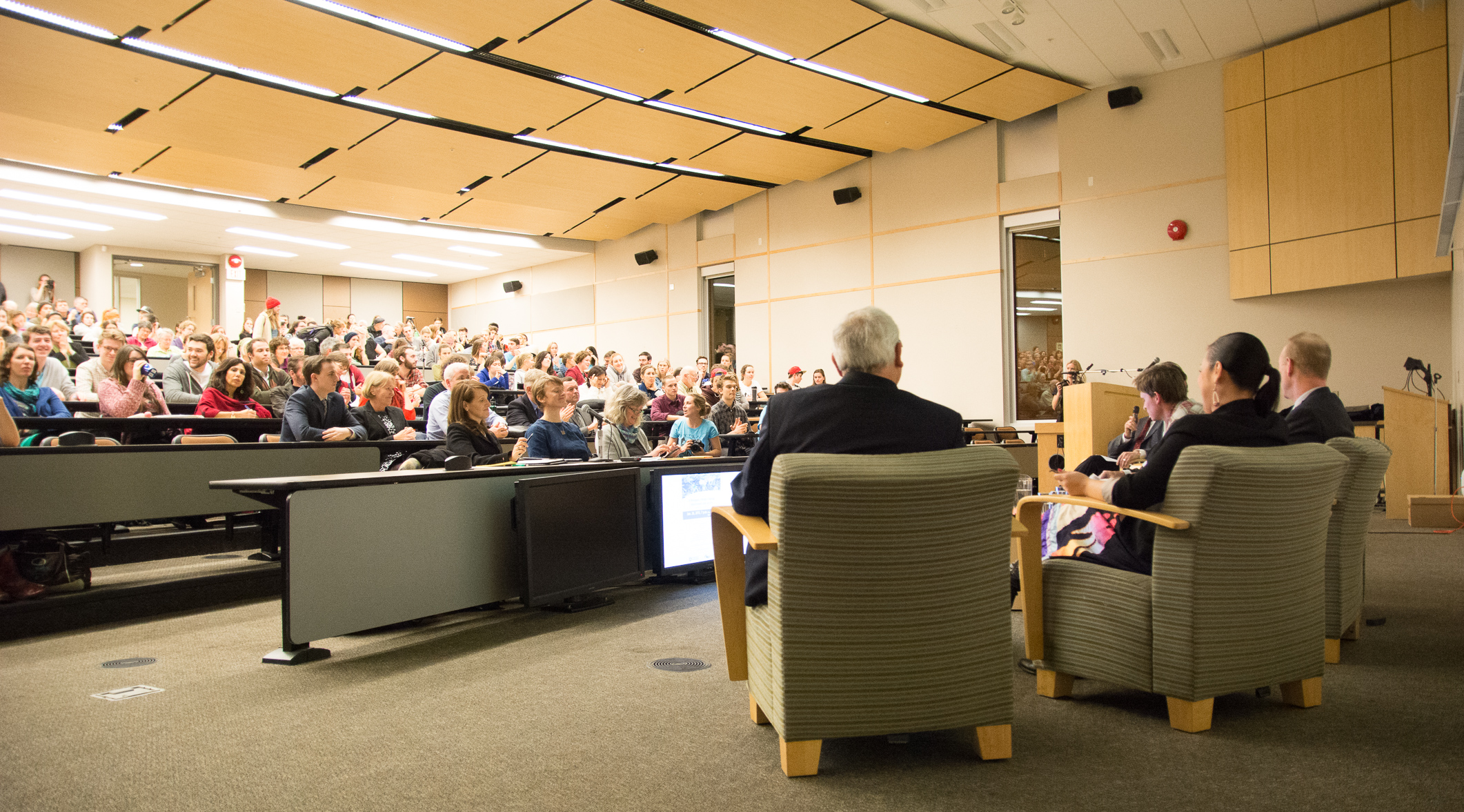 Panelists for and against fossil fuel divestment address a full house at UVics Bob Wright Centre on Jan. 26. Photo by Hugo Wong (Editor-in-chief)

“Climate action has an imminency and urgency that is unprecedented in our history,” said Malkolm Boothroyd, the volunteer organizer of Divest UVic, in an interview with the Martlet. “We’ve tried engagement for 20 years; we’ve tried to change the lightbulbs for 20 years. None of that has worked.”

Cary Krosinsky, the co-founder of the Carbon Tracker Initiative, opened the discussion, expressing the view that carbon emissions must be reduced, but that divestment is not the answer. “Oil use is systemic,” he said. “It’s embedded in everything we buy.”

Steve Douglas, the vice-president of investor relations at Suncor Energy Inc., echoed this view, stating that petroleum is implicit not only in our transportation, but also in our personal hygiene products and agricultural systems.

Both Krosinsky and Douglas questioned where the line will be drawn with divestment, when industries like transportation are intimately linked with fossil fuel emissions. “Fossil fuels are absolutely fundamental to our modern lives,” Douglas said. “They are principally responsible for the gains we’ve made since the Industrial Revolution.”

Boothroyd argued passionately for UVic’s divestment from fossil fuels, stating in his opening remarks that UVic does not have the ability to “shape the federal response to climate change,” but has responsibility to “address the ways that it is complicit in the climate crisis.”

“Just achieving this first step would be a tremendous victory,” said Boothroyd. “If we can break the grip that the fossil fuel industry has on our government, then that would open the door for a whole suite  of solutions to climate change.” 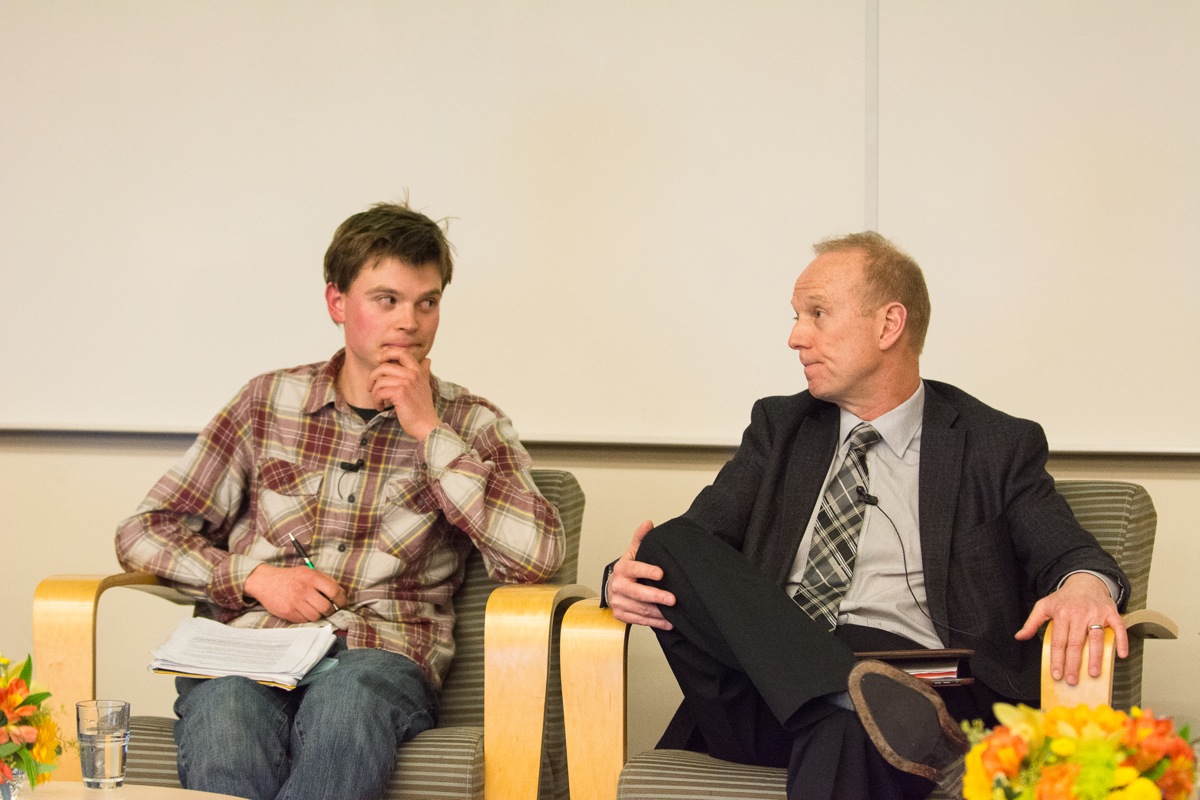 Divest UVic representative Malkolm Boothroyd (left) and Suncor VP investor relations Steve Douglas (right) listen to an audience question at a divestment and climate forum at the Bob Wright Centre on Jan. 26. Read a recap of the event online at martlet.ca.
Photo by Hugo Wong (Editor-in-chief)

Divestment however, is not a movement with the explicit goal of “bankrupting the fossil fuel industry,” according to Boothroyd. “What divestment does is passes a moral precedent against these business models.”

Crystal Lameman, a member of the Beaver Lake Cree Nation and Climate and Energy Campaigner for Sierra Club Canada, also advocated for divestment, recounting her first-person experiences with the negative effects of climate change on her community and indigenous ways of knowing and being.

“We are experiencing a complete assault on our ways of knowing and being,” said Lameman. “You have to be that change to the current business model and remember that, as indigenous people, our goal is not to stop anyone from making money, but it is to ensure that what we are all doing to make money isn’t causing harm to our ecosystems and perpetuating already existing trauma.”

When the forum opened to audience questions, many students questioned how Suncor could claim to be actively working to support the environment, while continuing to engage in practices that ultimately harm the environment. Douglas remained neutral in his responses, stating the climate change is a complex problem that requires complex solutions.

“Our atmosphere cannot hold the carbon from Suncor’s tar sands operations,” said Boothroyd. “That informs our understanding as a divestment movement, that we’ve got to stop supporting these industries and we’ve got to break their political grip on the government.”

Krosinsky, Douglas, and Stephen Hume, a columnist from The Vancouver Sun, noted that a simple plan like divestment cannot solve an issue as complicated as climate change. To this Boothroyd responded, “Divestment is simple; the urgency of climate action is incredibly simple.”