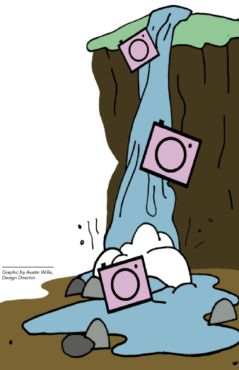 Bali’s waterfalls look better on Instagram than they do in person.

These days, it’s starting to seem like social media and travel go hand in hand. While travelling to any landmark — be it the Eiffel Tower or the Grand Canyon — selfie sticks have become commonplace. Friends no longer say “bon voyage” to one another but rather “make sure to take lots of pictures.” It’s expected that if you go on vacation, your Instagram will benefit from the new photo opportunities presented by travel abroad.

This week, the Balinese government announced they will be taking measures to cut down on disrespectful tourists at temples, and this comes as no surprise to me. People have been climbing and taking photos in bikinis beside Bali’s sacred sites, and the government has responded by claiming the “quality of tourists” has declined. This is a strong stance to take given that  tourism is such a huge part of the Balinese economy — and social media a huge driver of that tourism in turn.

I’m not immune to the draw of this kind of social-media driven tourism. This past  July, Instagram brought me to Bali. I had always been interested in the country’s Hindu traditions, but after seeing so many travel bloggers’ surreal pictures, I became convinced that I had to get there ASAP. So, I found myself in Ubud, a tourist-filled jungle city in the middle of Bali, realizing that I knew nothing about this island beyond what I had seen on Instagram.

I took to Instagram and found another girl’s photo of an amazing waterfall and DMed her. She gave me the name of the driver she hired, we contacted him on WhatsApp and agreed to pay $40 for four hours. We decided to start by going to two waterfalls near Ubud, Kanto Lampo waterfall and Goa Rang Reng.

We weren’t exactly welcomed, and I wouldn’t expect to be. We were unknowingly intruding on their ceremony.

Our first waterfall was 10km away from our hotel, but it took us nearly an hour to get there with Bali’s crazy traffic. When we finally reached Kanto Lampo waterfall, our guide parked his van alongside about ten other identical ones already there. The waterfall was a short 500m walk from the parking lot area.

There was actually a line up of tourists, iPhones at the ready, waiting to get close enough to the waterfall to snap a photo.

When it was finally our turn, our guide helped me scale down the slippery rocks. I stood in murky, waist-deep water with my friend’s iPhone in hand.

The photo I posted looks unreal, and the moment honestly was. The feeling of that streaming waterfall water on me was such a rush. 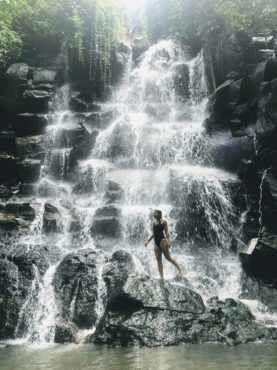 My smile in the photos isn’t fake, but literally everything else about that moment was. This waterfall had become merely a backdrop for tourists to pose in front of. All the waterfalls I visited were similarly crowded with line ups of tourists risking the safety of both themselves and their iPhone X’s just to get the perfect shot.

Amid all the selfie sticks was a guy that looked like Tarzan, scaling rocks like a pro and observing things with wide eyes. He had no belongings or friends with him. And he looked completely out of place beside the Insta-tourists.

As we were leaving the next waterfall at Goa Rang Reng, a huge group of Balinese people walked down the path towards us. We were suddenly caught in the middle of some sort of ceremony. They were young and old, dressed in traditional clothes and hoisting religious objects. Some of them said hello to us, but others gave us dirty looks and motioned to us to cover up and sit down. We weren’t exactly welcomed, and I wouldn’t expect to be. We were unknowingly intruding on their ceremony. I tried to ask my driver what was going on, but his English was too weak to explain.

Bali is by no means devoid of culture, as there’s certainly a culture to be discovered there. But culture isn’t Instagrammable.

Bali is by no means devoid of culture, as there’s certainly a culture to be discovered there. But culture isn’t Instagrammable. The ceremony we saw pass by us on the waterfall’s path was unlike anything I’d seen before and it was what I came to Bali hoping to experience. The people there have a culture contained to the island; it’s naturally unique. While I was travelling in Bali, I felt like I was being shown the tourist ‘ends in a gift shop’ version of their culture, and witnessing this ceremony by accident broke that touristy-illusion.

I still posted my photo next to the waterfall. I don’t know how I truly feel about taking pictures while travelling — it’s human nature to want to share and keep memories. What I can’t get past is how much social media has taken over; it seems like we actually care more about getting the Instagram likes than making the memories.

So before you take off on your next #vacation, ask yourself why you’re going. There’s certainly Instagrammable spots in Bali, but Bali is so much more than just another Instagrammable place.