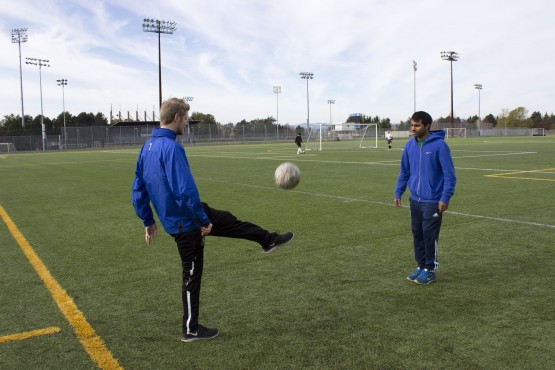 It’s fair to say that Craig Gorman and Cam Hundal have had a major impact on the UVic men’s soccer program.

Since their debut in 2011, the two fifth-years have double-handedly become as integral to their team as any players possibly could have been. They’ve progressed from championship-
winning rookies to fifth-year veterans: from first-years to first names on the team sheet.

I’m meeting with Hundal and Gorman a couple days before an elimination match against the Mount Royal Cougars on Friday, Oct. 30. Win the match, and they’re one step closer to the championship they won back in 2011.

We head down to the turf, Centennial Stadium in the distance. Just 100 metres away, Hundal scored the Canadian Interuniversity Sport (CIS) championship-winning goal, bringing the trophy back to Victoria after a seven-year absence.

“People would ask me how the season went [in 2011],” Gorman tells me, happy to be reminiscing about what was surely the highlight of the duo’s varsity career. “I’d say, ‘Oh, it was good. We won.’ They’d ask, ‘Won what?’ And I’d say, ‘Everything. We won everything.’”

Despite being first-years when they won the title, the two players were essential to the process. Gorman finished the tournament with a goal and an assist, and Hundal was the tournament’s MVP, with three goals and an assist. Each of their assists led to goals from the other.

“Coming into the squad as new players, [we started] on the second team,” says Hundal. “It was always really competitive.”

“I think it really helped push everybody to be at their best and really fight for that spot,” says Gorman. “Ultimately we all wanted to win the national championship, but we all wanted to be on the field when we were winning. It was a huge drive for everybody.”

If Vikes fans didn’t know who Gorman and Hundal were before the championship, they certainly would afterwards. After missing the playoffs the year before the duo’s arrival, the Vikes have made the post-season for the past four years. With a do-or-die game against the Cougars on Oct. 30, Hundal and Gorman had one last chance to play on the Centennial turf and make the post-season with the Vikes.

Despite a massive change in personnel since the 2011 win, one person remains: head coach Bruce Wilson. And, as the players tell me, their relationship with their coach is a strong one.

“Off the pitch, [Wilson] is great friends with his players,” says Hundal.

“His player management is really good . . . and everybody gets along with him. Everyone talks to him; he’s not one of those guys that you only see at training and then you’ll never see him again or never talk to him off the pitch.”

“[Our relationship] developed over the years and slowly gotten to that point where he consults us, and we have input in what we think should be done as well,” he says.

“[Wilson] really does take that into account, and he listens to us as well, and we listen to him and respect his decisions as well.”

The two tell me they actually came to the interview from Wilson’s office, where they chatted about the game on Friday and the team in general. The coach has placed a lot of trust in his veterans; Gorman is now the captain of the Vikes men’s soccer team, and both he and Hundal play important leadership roles within the squad. It’s a position that Gorman calls “surreal,” and Hundal agrees.

“[The five years go] by so fast so we don’t feel old,” he says. “Obviously we’ve got to take that leadership role a bit more, but that comes naturally I think.”

The two say they’re not nervous about the big game, but they admit they have thought about the finality of it all. And, in keeping with the theme of finality, I ask Gorman and Hundal to juggle a soccer ball in order to grab a photo and end the interview.

I’m not sure I believe him.

Cut to three days later. Oct. 30. Centennial Stadium. UVic Vikes versus Mount Royal Cougars. Cam Hundal splits the Mount Royal defense with a stunning through ball that Koch finishes to put the home team up 2-0. Hundal was scintillating on the night, providing another assist and notching two goals in a 5-0 annihilation of the Cougars that sends UVic to the Canada West Final Four, one win away from heading back to the CIS Championships.

“First year, you come in and you don’t know what to expect,” says Hundal in our interview. “And then you’ve won the championship and you’re kind of like, ‘Oh.’”

“I feel like I almost want it more than first year,” says Gorman.

So can they win it all again? They certainly want to. And I get the sense that when you’re as talented and dedicated as Gorman and Hundal, wanting something is often enough.