EDITORIAL: The scales of justice are past the tipping point 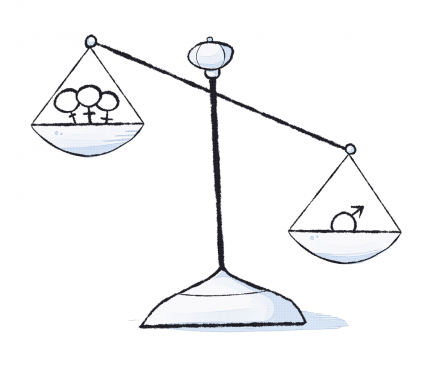 As last week’s Jian Ghomeshi verdict demonstrated, women continue to be disproportionately marginalized by the legal system — a system that, in theory, should be protecting them. On the one hand, women are cast by courts and the media as “vulnerable” people in need of protection — which, let’s face it, is benevolent sexism. On the other hand, there is an inherent distrust of women when they speak out against men, particularly those in positions of power. Women who have endured sexual harassment, assault, and violence are treated like criminals on the stand and have to jump through countless hoops to find even a small shred of justice.

But on March 18, retired pro wrestler Terry Bollea aka Hulk Hogan was awarded $115 million in a lawsuit against Gawker Media, which had published a clip from a longer video of Hogan engaging in sexual intercourse with his friend’s wife. The jury found Gawker to have been acting with “reckless disregard” — the compensatory damages totaled $60 million for emotional distress and $55 million for economic injury (and that’s before added punitive damages).

By contrast, when sportscaster and television personality Erin Andrews won her court case over a leaked nude video filmed by a stalker, she wasn’t awarded anything close to $55 million (less than half of Hogan’s payday). This was due partly to the fact that during cross-examination, her personal success since the video was posted online in 2009 was used to dispute that it had had a negative effect on her career. Because she received a couple of new endorsements, she couldn’t possibly have suffered by having a nude video of her posted online, right?

This is where the double standard regarding men, women, and sexual exploitation comes into play. After all, a dude having sex is viewed as the most natural thing in the world. Was Hogan foolish? Sure, but his actions are hardly blameworthy, even in a deliberately made video meant for private entertainment. He was therefore deemed a victim of privacy invasion, pure and simple.

Which brings us to Ghomeshi, Lucy DeCoutere, and his two other unnamed victims. A large focus of this case was on how the women reacted to their situations: after suffering abuse, all of the witnesses maintained some level of contact with their alleged abuser. These actions were used by the defence team to exploit the underlying social stigmas that still exist in regards to cases of sexual assault; namely, that if a victim does not act in the way that society believes they should act post-assault, then it was never really assault in the first place. In the same fashion as Andrews’ case, because these women did not act the way the court determined that victims should act, they were deemed to be uncredible witnesses. Returning to an abuser is, sadly, not uncommon in a world where women are still economically restricted compared to men, or are even simply caving to social pressures to “stand by your man” or “hang on to the catch you’ve got,” let alone that many who experience sexual assault are left confused, disoriented, and bewildered after the fact. As Lucy DeCoutere mentioned multiple times in her testimony, her reaching out to Ghomeshi after the fact was her attempt to normalize the situation. This reaction makes perfect sense, and if anything, only betrays a desire to change the facts, to re-write the story, to change the ending.

Still, there fails to be a widespread recognition of the disproportionate expectations that societal norms enact on women versus men. As is evidenced by these cases, any display of sexuality, even against one’s will, is almost always determined to be the victim’s fault: they should have known better, or they did know better, and it was therefore consensual. After all, when Andrews’ video was first published online, some assumed that she had leaked it herself as a publicity stunt. Women are always tasked with taking responsibility for their sexuality, while men are typically excused for theirs, and the justice system in all of these cases reinforced that double standard. And when it comes to females in celebrity positions, or associated with a celebrity, there’s an even worse connotation: that the marketability of their sexuality is part and parcel of their job descriptions, or that they’re just out for a slice of the pie.