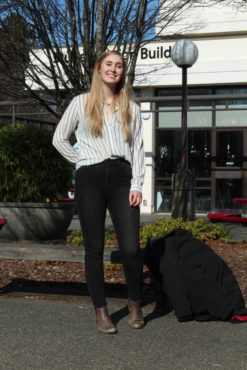 Candidate for Director of Campaigns and Community Relations with Envision UVic

How would you describe your style and how it relates to your life as a student?

I usually try to go for business-casual, but, at the same time, something I could feasibly go for a hike in at almost any time. Just because I enjoy looking nice, but comfort is key, especially if you’re sitting in the library for twelve hours.

If you do get elected, how do you think that would affect your fashion choices?

Because I’m pretty much business-casual already, I don’t see a lot of change. But at the same time, I’d like to wear something that reflects the fact that I’m representing the student body and that people are counting on me to do a good job of representing them to people. 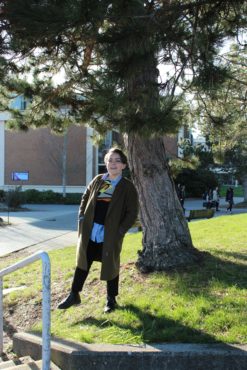 Describe your fashion style and how it relates to you being a student.

I’m minoring in visual arts and I’ve actually been a painter since before I can remember actually. And I was standing next to my painting last year and my professor said, “Did you intentionally wear the same colours as your painting?” And I looked down and I was wearing the same exact colours and then I realized I’m most happy with the way that I look when I use the colours that make me happy.

If you get elected, how do you think that would affect the way you dress?

I think I’ll have to consistently pick a collared kind of look so I’ll probably have to pick some more button-up collared shirts. That’s very specific, but I don’t have a lot of them. I think that this dominant kind of discourse surrounding formal appearance is one that I’ll have to let overcome my usually pretty out-there fashion sense. But at the same time, I’m totally willing to deconstruct that whole notion of what is professional because I think that it’s kind of a super elitist way of approaching business so that’s something that I’d actively consider.

Candidate for Director for Student Affairs as an Independent 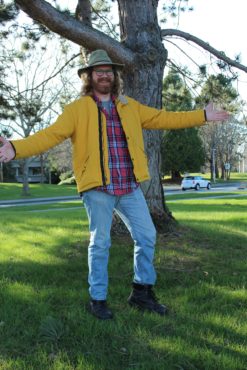 Describe your personal style and how is it influenced by you being a student.

Well I have described my style in the past as being like “tuk tuk driver.” More because I always buy inexpensive shirts and they’re usually plaid. Like this one’s actually pretty decent, but they were like eight bucks at the Sears closeout. But it’s not a hideous plaid style, but some of them have been pretty kind of suspect. [As for] the hat, I’m really fair so I freckle and I burn so I wear the hat to stop from getting too freckly. I got a little story about the hat. I was walking through the SUB and some guys I didn’t even know were like, “Oh, you’re not going to impress anybody with that hat.” And I was like, whatever. And some girls walk by and were like, “Hey, nice hat.” And I was like, “ha ha ha.”

If you get elected, how do you think that would affect how you dress?

I’m not really seeing it affecting how I dress. Maybe if people go, “Hey, you shouldn’t wear that” then I might stop wearing certain things. But that’s about it, really.