Elgami, released on Dec. 19, allows the user to adorn a variety of different wardrobe staples (leggings, skirts, capris, scarves, and more to come) with patterns based on programmed algorithms Erlic learned through his studies (he majored in economics and minored in psychology). 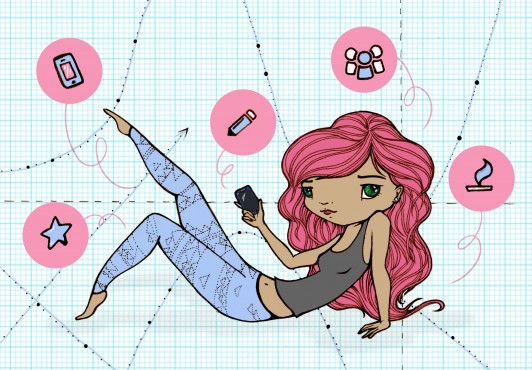 Textbooks have become an invaluable source. “I started playing with these different methods last year, and thought [that] these patterns, simulations, each of them have a story to tell,” he said. “[The app] uses concepts and patterns from physics, ecosystem signs, things like that.”

For example, the “random walk” model can occur when animals forage through a forest, or when gamblers are betting on the roulette wheel. Their behavior then forms lightning bolt shapes when graphed. Erlic uses this programming to create a basis for customizable patterns and prints on the clothing available on Elgami.

“These models are really complex, and I thought they look great, [so] why not throw them on pants? Why not tell the story in a more viral medium—clothing as opposed to graphs and spreadsheets,” he said.

Unlike the fashion world’s six-month wait, the app allows the product to be shipped to your door within five to six business days from Montreal, or one to two weeks internationally, at a cost between $40–60. Elgami also offers an in-house collection, Harmonize, created by Erlic himself. The Montreal-based creations are produced in polyester and nylon, and Silk Habotai for the scarves.

Erlic originally used the patterns for artwork on his Instagram account, and a comment on one of his photos enlightened him to the possibilities of blending the patterns with fashion. The development of the app began in June, and has taken over 200 hours of work to complete. “[It took] a lot of late nights,” he said. “I didn’t sleep last night—things are just moving along.”

There are currently a handful patterns available for pattern-making, with over 50 on the way for the end of the month, but there’s potential for thousands. “There are thousands and thousands of ways to iterate very simple rules,” he said.

Although Erlic is among the pioneers of pairing of algorithms with fashion in such an accessible way, the creative coding industry is a growing field. “There is a big community of creative coders. It’s called procedural computation. There is an industry, but it’s still in its infancy,” he said.

Erlic hopes Elgami will continue to evolve as the app gains more traction and exposure. “The end goal is that every user that logs into this app will have a gallery they can curate themselves, their own designs, other peoples’ designs, and they can share them with each other,” he said.

Elgami will provide insightful data on what is most in demand by users in terms of colour choice, print selection, and more. In the future, the app may grow to accept algorithm submissions.

Until then, Erlic hopes the app helps to expand “peoples’ capabilities, and democratizing choice. Letting people decide what they want to wear, how to express themselves.”

Want to learn more about Elgami? Check out the website for patterns and shopping inquiries here.