Elizabeth May takes to Twitter to participate in debate 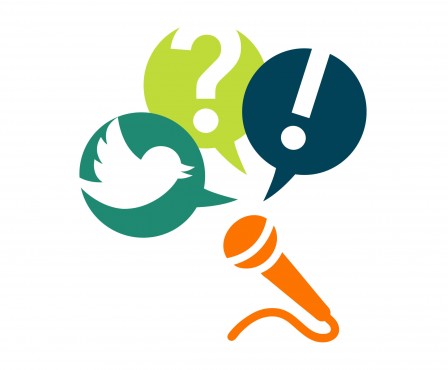 After being left out of a national party leaders debate held by the Globe and Mail on Thursday, Sept. 17, Elizabeth May used Twitter to add her input in real time.

The Green Party held an event showcasing May’s participation via Twitter to a full house at First Metropolitan United Church at 932 Balmoral Rd. in Victoria. The debate, broadcast from Calgary, was shown on one screen while May’s Twitter feed was shown on another to the crowd of about 600.

“Twitter came up with [the idea],” May said, talking to the Martlet earlier that day. “They’re engaging with any party that wants to talk to them.” With about 96 000 Twitter followers, May said she hopes to make enough key points to help voters make up their minds.

People at home who would have preferred May be included in the debate  —  81 per cent of Canadians, according to an EKOS poll  —  were able to view May’s rebuttals from their computer or mobile device while watching the debate.

The typical debate criteria for participation for the national broadcasters is representation in the House of Commons, which the Green Party has. “That is the rule,” May said, “and I’m included in the national televised consortium leaders’ debates.”

The Globe and Mail, however, is using official party standing (12 or more sitting members in the House of Commons) as their criteria.

“What these debates are about — these private corporate debates  —  is to try to distract the voters from the reality that the national televised leaders’ debate in English may well be cancelled,” May said.

Earlier this year, the Conservative Party announced Stephen Harper would not participate in the traditional national broadcasters’ debates held by Global News, CTV, CBC, and Radio-Canada. These broadcasters had reached an agreement for participation with the NDP, the Liberal Party, the Green Party, and the Bloc Quebecois (the Bloc only participating in the French debate). Tom Mulcair, however, has since said he will not participate in these debates if Stephen Harper would not.

Instead, the Conservatives have agreed to participate in several smaller debates hosted by private media.

“These debates will have fewer [viewers],” May said, “but are going to be used as an excuse by Stephen Harper and Tom Mulcair as to why they don’t need to be available for the debate that Canadians expect we will have.

“I think most people think that these ‘additional’ debates, are additional,” May said. “They don’t realize that these private corporate debates, like the Munk debate, TVA, and the Globe and Mail will be used as an excuse for not holding a national televised leaders debate and not making Tom Mulcair and Stephen Harper available to the maximum number of Canadians in a fair debate.”

In a statement on the Globe and Mail website, David Walmsley, the Globe and Mail’s Editor-in-Chief, said, “We’ve set up the debate this way because we believe that by limiting the format to Canada’s three main party leaders, we will create a truly focused, successful discussion about the state of the Canadian economy.”

May, however, said “they’ve smashed the rules to accommodate Stephen Harper.” May explained that these smaller, corporate debates will avoid asking some of the more important questions. “[The Globe and Mail has] always endorsed Stephen Harper in election campaigns and they have not promoted action on the climate crisis historically. So if you want to use the word ‘focused,’ what are you keeping out?”

The focus of the debate was the economy. “But even on the economy,” May said, “there won’t be any ques-tions on the Canada-China investment treaty and how Stephen Harper sold out our sovereignty. There won’t be [significant] questions [on climate].”

Indeed, the debate did not include discussion of the Canada-China investment treaty, although climate was brought up at various points.

During the debate on the Fair Elections Act in the House of Commons, May brought forward amendments that would have Elections Canada regulate leaders’ debates in a predictable way. “I didn’t get a single vote in support of my amendment from the Liberals, the New Democrats, or the Conservatives. So it looks like the old-line parties like making it a bit arbitrary.”

“But this is the worst yet   —  the 2015 election. If the bigger parties get away with . . . not having a televised leaders’ debate, I don’t know how we’ll ever get back that level of engagement for voters.”