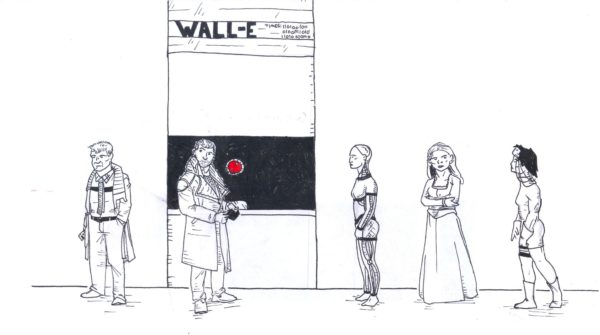 It’s no secret that societal changes are often reflected in the films we make and watch. For example, environmental concerns lead to horror films about natural destruction, like Armageddon, Deep Impact, and Waterworld in the 1990s. Uncertain political and economic times often lead to superheroes dominating popular culture — they were big in the Great Depression of the 1930s and are even bigger now.

Nowadays, much of the world is engulfed in fear of increased mechanization and technological dependence, leading to a barrage of films about the danger of artificial intelligence. We at the Martlet are just as scared as you are, so we decided to compile a list of the best films about technology, humanity, and robots ultimately being way better than humans at most things.

The fear of rogue A.I. is not a new one (as evidenced by a few of the films on this list), but it certainly has flared up recently. Is it a rational fear? Only time will tell. In the meantime, you’re welcome to exacerbate any frightened feelings you may have by watching these great films about how we’re all just meatbags waiting for our inevitable robot overlords.

The OG A.I. film, 2001 practically invented the genre of being scared of computers. You’ll be terrified watching Hal, the film’s antagonistic artificial intelligence, murder astronauts in the vast expanse of space; you’ll also be terrified when you realize Siri is, like, Hal’s granddaughter or something. Every other film on this list (and probably every film ever) is basically a rip-off of 2001, so start here.

Depending on what you consider makes a “good” film, this is either the best or the worst film on this list. If you like films with artistry and purpose, then you’re out of luck. If you like absurd twists and turns and Shia LaBeouf looking panicked, get on Netflix as quickly as you can. LaBeouf and Michelle Monaghan star as two citizens stuck doing the bidding of a mysterious woman who only speaks to them via phone calls. I won’t spoil the twist, but considering this is a list about artificial intelligence . . .

Ah, what a classic. Starting with a robot who is apparently broken, this is the film that still has me terrified about having self-driving cars. I, Robot tries to get philosophical — and a lot of the scenes between Sonny, the rogue robot, and Will Smith are very interesting — but the film’s rip-off of other sci-fi concepts (“I can dream,” says Sonny the Android) and its reliance on a Will-Smith-Saves-the-Day ending lessens the overall impact. It’s about as thrilling as having a vacuum cleaner suddenly turned on — it may give you a jump, but mainly it’s just worth a laugh or two.

Perhaps the perfect blend of horror, science fiction, and philosophical thriller, Ex Machina is a phenomenal movie. The film is based on the Turing Test, conceived by mathematician Alan Turing to determine whether a machine can be considered human. Rather than rely on A.I. movie tropes (like I, Robot does), Ex Machina takes those tropes and turns them against the viewer. This is perhaps the most exhilarating film on this list, and it easily has one of the most horrifying endings of any film I’ve ever watched.

The Westworld film is a great example of evil robots making for great and mindless entertainment, but the TV show uses its expansive run-time (ten and a half hours) to really plumb the philosophical depths of artificial intelligence. With more twists and turns than a Roomba in a labyrinth, the TV show features some stunning acting performances — you’ll struggle to support the humans in this one.

For the love of God, do not watch the 2017 remake of Ghost in the Shell. Even beyond the whitewashing, the new film simply cannot compete with the original animated film when it comes to the philosophy of the story. Set in a world where humans can upgrade all parts of their body, Ghost in the Shell tells the story of a cyborg secret agent taking on a dangerous hacker. The new film relies on exposition-heavy dialogue and clunky characters; the original is visually spellbinding and tells a better story with fewer words. The original film revolutionized animated films and perfectly paces its action with its slower, dialogue-heavy moments. Anyone still feeling sorry for that garbage man, by the way?

Both Blade Runner films do a perfect job of making you realize that a world with robots would probably be awful. The future, in general, is a pretty miserable place in the Blade Runner universe, so it makes sense why humans seem so hell-bent on making artificial intelligence — why suffer alone? However, both films are masterpieces. The original Blade Runner is a touchstone for all science fiction films after it, and Blade Runner 2049 is  cinematic brilliance; visually and aurally exceptional. It’s a three-hour-long saga of a film, but it is well-paced and well-written (though a little hard to follow). The original film is set in 2019, of course, so it’s not long now until its story is realized and robots walk among us. I dibs Ryan Gosling’s coat.

If you’re sick of how humans interpret the dangers of artificial intelligence, why not watch a film written by the other side? That’s right: a script written by artificial intelligence. BAFTA-nominated filmmaker Oscar Sharp and AI researcher Ross Goodwin fed a computer (named Benjamin) thousands of sci-fi scripts and asked it to make its own. The result is a hilarious and oddly touching short film about . . . well, it’s hard to explain. Maybe we meatbags just aren’t smart enough to figure it out yet.

There you have it — all the best films about artificial intelligence turning on its hubris-fuelled masters and taking back the world we provided for them. Fortunately, today’s robots aren’t quite as menacing as those in the film — they can beat us at chess, sure, but many struggle to open doors. They’ll probably never get as smart as the robots in the movies I’ve just listed.