Fencing with The Force 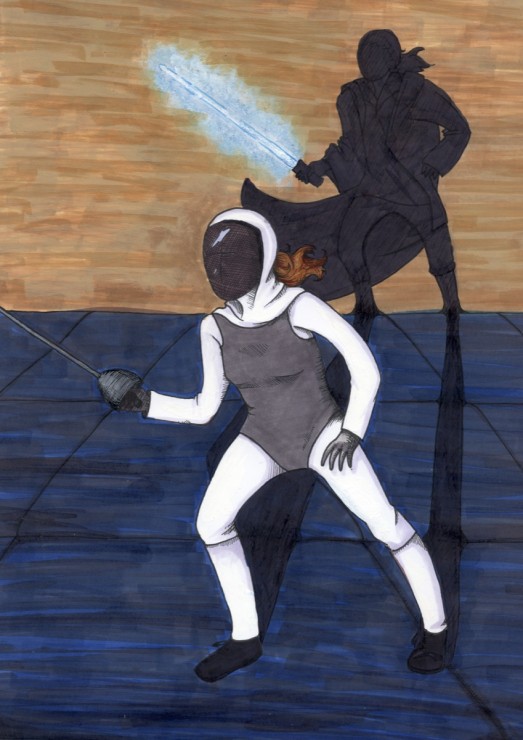 Inside a fencing mask, the world disappears. The light of the room dims, eyes shielded by the tight cross-section of wire mesh that stretches around my face like a cage. Sounds slack off, as yells and cheers are reduced to muffles by the time they reach the ears. All that remains is the pumping of blood. The noise of fear and excitement never echoed so loud. Outwardly, the eyes fade into shadow. From afar, the face is merely a black canvas. Within the mask, sight finds a way to focus on the important thing: the sword.

In 1997, I sat in a Vancouver movie theatre, perched on a pile of coats so that my five-year-old frame could see the screen. The remainder of the audience consisted of adults. I convinced myself I wouldn’t like the movie, Star Wars Episode IV: A New Hope: Special Edition, but my dad assured me that kids had loved Luke, Leia, and Han since 1977.

The opening crawl, scrolling off into infinite glory, contained a few too many “big” words for me to comprehend. As they glided beyond the screen, my dad bent his head and recited the entire introduction to me. Even at five years old, I clearly understood the division that had been stated between good and evil. A blue, green or purple lightsaber meant the Jedi Knight fought for good. A red laser sword signified allegiance to the dark side.

From that point on, I measured my childhood in Star Wars. How many times could I re-watch episodes IV, V, and VI on VHS in a month? How many years, months, and days till episodes I, II, and III screened in theatres? And how many times could I wrap a housecoat around my shoulder, find a suitable sword—wrapping paper tubes work well—and lightsaber duel with my younger brother?

“You must learn to grip the sword correctly. It’s the most important skill of a fencer,” says Nan Ho, the head coach of the University of Victoria’s fencing club. Except, he doesn’t just say it, he yells each sentence as if I’m about to battle Darth Vader.

I grip the sword handle, pressing my fingers against the guard. My thumb lies atop the handle, ready to guide my movements, as one would guide a screw into place. The screwdriver grip.

Dr. Ho yells in my ear. The fencing mask is no match for his bellowing voice. I’m jabbing too much and screwdrivering too little. Dr. Ho grabs my hand, demonstrating the correct movement.

“Extend your arm while turning your wrist!”

I close my eyes and focus on my hand and the sword. Hand and sword. Hand. Sword. I channel the Force and feel my hand and wrist moving simultaneously.

“Good! Now you learn what to do with your feet!”

I’m allowed to remove my mask for our movement lesson. I need to focus on finding my fencing line, an invisible track that my feet must follow.

My right foot leads, pointing ahead of my body. My left becomes the anchor, placed perpendicular.

“Now squat!” Dr. Ho motions, sitting into a squat. I mirror his movement, but I struggle to keep my balance. Dr. Ho yells again; I’m bent too low.

He adjusts my legs. The correct position feels like I’m clinging to the side of a cliff, not quite committed to jumping. He surveys my placement on the fencing line.

I close my eyes again. Screwdriver grip with my hand and sword. Legs gently bent, leading with my feet. My eyes open.

“En garde!” I yell—the universal signal a match is about to begin.

[pullquote]Defense reins over the entire game. After all, in a real life lightsaber duel, forgetting to defend results in death. [/pullquote]

Except, it’s not a match. I fumble with the sword and my left foot refuses to stay angled away from my body. I get a few hits on Dr. Ho, called a touché, but I know he could strike me down with one swish of his sword. We spend the remainder of the practice parrying, the fencing term for when two swords make contact.

Fencing has three fighting varieties: foil, épée, and sabre. Sabre uses a sword with multiple scoring edges and the attacks are quick.

The UVic club focuses on foil and épée skills. New members must learn how to foil before moving on to épée. In a foil match, only one touch is allowed at a time. In the case of a simultaneous hit, a referee uses the “right of way” rule to determine which player attacked first. To score, a hit must make contact with the torso or back. Arms and legs are off limits. Unlike sabre, foil and épée swords have a single scoring edge: the tip.

With épée, the entire body is fair game for scoring points. For this reason, an épée sword has a large hand guard. The other significant difference is scoring. Unlike with foil, both players can attack at the same time.

Both styles follow illogical move reasoning. If an opponent leaves himself open to attack while attempting a hit, the player being attacked will not earn a point for attacking as well. Defense reins over the entire game. After all, in a real life lightsaber duel, forgetting to defend results in death.

Nan Ho and his wife Veronika have coached the UVic Fencing Club since 1980. While no official records have been kept, Veronika is certain they’re the longest-serving volunteer coaches on campus.

[pullquote]Of anyone in the club, Dr. Ho best fits the part of Jedi Knight[/pullquote]

Dr. Ho, who refuses to take a holiday in fear it would interrupt club training, teaches every Saturday on campus. Veronika helps members learn how to referee and judge bouts.

“If it wasn’t for him, I wouldn’t be this crazy,” says Veronika, who married Nan over 40 years ago. Back then, Veronika didn’t fence and admits to not liking Nan initially. “I thought he was too noisy and too loud and too much of a buffoon.”

His constant bragging about his fencing skills led Veronika to learn the sport on her own, without his knowledge. Later, she casually mentioned, “Oh, I fence too.”

From afar, Veronika could be the fairy godmother from Sleeping Beauty—short, aging hair streaked with grey and a rosy complexion. On a closer look, it’s clear she gives a good hug, a gesture well-practised on her two sons.

Club members always crowd around her, asking for advice on complex refereeing scenarios.  She dresses the same as the members; white tapered pants and a thick white jacket for protection. To the untrained eye, a fencing jacket resembles a straightjacket, the difference being one protects from outward opponents and the other from oneself. 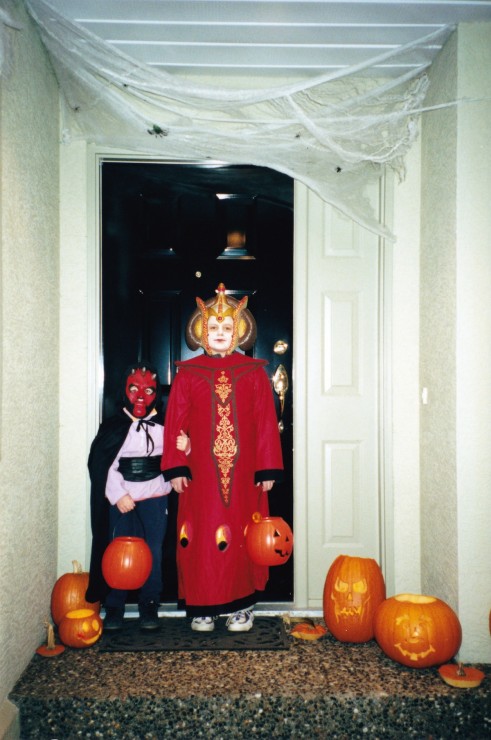 The author and her brother, dressed as Darth Maul and Queen Amidala, go out trick or treating on Oct. 31, 2000. –Provided (photo)

Dr. Ho wears all black, including a cap pulled low, brushing the frames of his glasses. His hair, similar in length to Veronika’s and also streaked with grey, gathers in a tight ponytail. He walks with a slight shuffle in each step causing his long leather coat to swish around his knees like a robe.

Of anyone in the club, Dr. Ho best fits the part of Jedi Knight and I imagine him shuffling towards an opponent, reaching inside his coat and unleashing his lightsaber.

The late Bob Anderson, who passed away on Jan. 1, 2012, choreographed and fought as Darth Vader’s stunt double in two of the three original Star Wars films, The Empire Strikes Back and Return of the Jedi. His role in the first instalment, Star Wars, remains uncredited.

Born in Britain and immigrating to Canada later in life, Anderson served in the Royal Marines during WWII. A fencer since childhood, Anderson represented Britain at the 1952 Summer Olympics in Helsinki as well as in the 1950 and 1953 world championships.

His first film role came in 1952 when Anderson was asked to be the fight choreographer and stunt double on Master of Ballantrae, a swashbuckling tale starring Errol Flynn.

Anderson and Flynn struck up a friendship, despite Anderson being known on set as the man who stabbed Errol Flynn in the thigh during a sword fight scene.

It wasn’t until 1983, the year the third Star Wars installment was released, that Anderson’s role with the series was revealed.

“Bob Anderson was the man who actually did Vader’s fighting,” said Mark Hamill, who played Luke Skywalker, in an interview with science fiction magazine Starlog. “It was always supposed to be a secret, but I finally told (director) George (Lucas) I didn’t think it was fair any more. Bob worked so bloody hard that he deserves some recognition. It’s ridiculous to preserve the myth that it’s all done by one man.”

Anderson went on to become the technical director of the Canadian Fencing Association and was sword master for Hollywood’s biggest productions, including Pirates of the Caribbean, The Mask of Zorro, and all three Lord of the Rings instalments.

A real foil battle has broken out between two of the club’s brightest members, 23-year-old club president Caleb McIntosh and 13-year-old Hudson Showalter, who’s been a fencing fan for as long as he can remember. “What little six-year old doesn’t want to fight with swords?” Hudson asks.

Caleb sneaks a hit on Hudson’s left side. The electronic scoring machine lights up. A point for Caleb.

The fencing line is easier to spot in an official match. Each player dons a metal vest, wired from within. One current runs through their swords and the other attaches to the scoring equipment, anchored at either end of the arena.

Buzzt. Another point for Caleb.

The boys reset. Caleb plays an intellectual game, shifting around the playing area, light on his feet. Hudson’s moves take up space, large lunges and forceful hits. Wearing equipment, he could be Caleb’s twin.

“If I’m thinking about what move to do, I’m thinking too much,” says Caleb, who admits, “I hear Dr. Ho’s voice in my head yelling ‘Don’t think!’ When it’s going well, you feel rhythm and you feel flow and you might have a feeling you want to do a move, but you’re not thinking about it.”

Clang. Swish. The boys parry, both struggling to score a point.

Lightsabers and star ships may not exist, but I will always believe in the Force. The concept of an energy field created by all living things, that surrounds and penetrates living beings and binds the galaxy together seems perfect for fencing, a sport grounded equally in physical and logical strength.

Back inside the fencing mask, I keep my eyes open. The world still disappears, but now I disappear as well. All that remains is my hand and the sword.