Field school a chance for students to witness Holocaust legacy

In May 2016, Helga Thorson, Chair of the Department of Germanic and Slavic Studies, will run this year’s I-witness Field School: one week of intensive study of the Holocaust, followed by three weeks of travel through Central Europe visiting Holocaust sites.

Before the course even begins, though, students are expected to have read the entire reading list. Then the first week of the field school is spent at UVic, discussing the readings and giving presentations on their site of choice. After that, it’s off to Europe for three long weeks of trying to see as much as possible.

Thorson’s personal connections to the Holocaust have influenced her study of Germany and its culture; her mother lived in Germany during the Nazi regime, and her Jewish great-grandmother was deported to a concentration camp. During the trip, the field school makes a stop at the grave of Thorson’s great-grandfather in Berlin, where an inscription was added for her great-grandmother. Listening to Thorson read out family letters written during the Nazi regime and talking to survivors of the Holocaust while in Europe gives students a personal connection to the material being studied that is extremely difficult to achieve in a traditional classroom.

This year, the field school is stopping in Berlin, Germany; Crocaw, Poland; Vienna and Linz in Austria; Budapest, Hungary; and former concentration camps in Germany, Poland and Austria. Students will visit Holocaust memorials both old and new, and witness the places where prisoners lived before being slaughtered en masse. Students will also have the opportunity to meet European university students and compare their cultural experiences regarding the Holocaust.

Any students who join the field school will be in for a tiring, challenging experience. The field school can be emotionally and physically exhausting, but ultimately extremely rewarding, says Thorson. Following the trip’s conclusion, students are expected to write a reflective essay, give a public presentation, and write a research paper on their experiences by the end of the summer term.

Thorson says that the field school has been known to shape students’ lives and the way they think. The field school is an excellent opportunity for anyone in any discipline: participants have majored in fields such as Germanic Studies, Writing, History, English, and many more. The diverse viewpoints and varied skillsets of all participants each bring something different to the program.

The deadline to apply to the field school is Nov. 1. Students can find more information at uvic.ca/humanities/germanicslavic/undergraduate/home/fieldschool/. Students are also encouraged to email iwitness@uvic.ca with any questions they may have. Up to twenty students will be accepted to the field school this year. The following gallery is of field school attendees from a previous year. 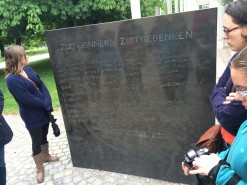 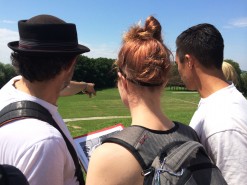 At the site of the former Mauthausen concentration camp in Austria. Photo provided by Helga Thorson 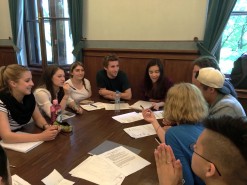 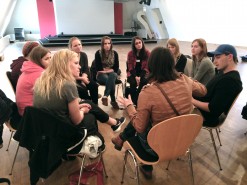 A joint class session at the Jewish Museum in Berlin with students from the University of Osnabrück. Photo provided by Helga Thorson

Memorial to the Homosexuals Persecuted under the National Socialist Regime in Berlin. Photo provided by Helga Thorson

At Hartheim Castle, a site of the Nazi T4 (euthanasia) program. Photo provided by Helga Thorson 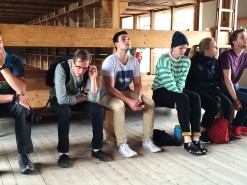 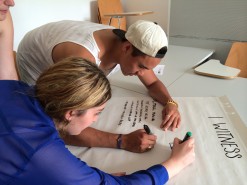 Class session at the University of Vienna discussing what it means to be an I-witness. Photo provided by Helga Thorson