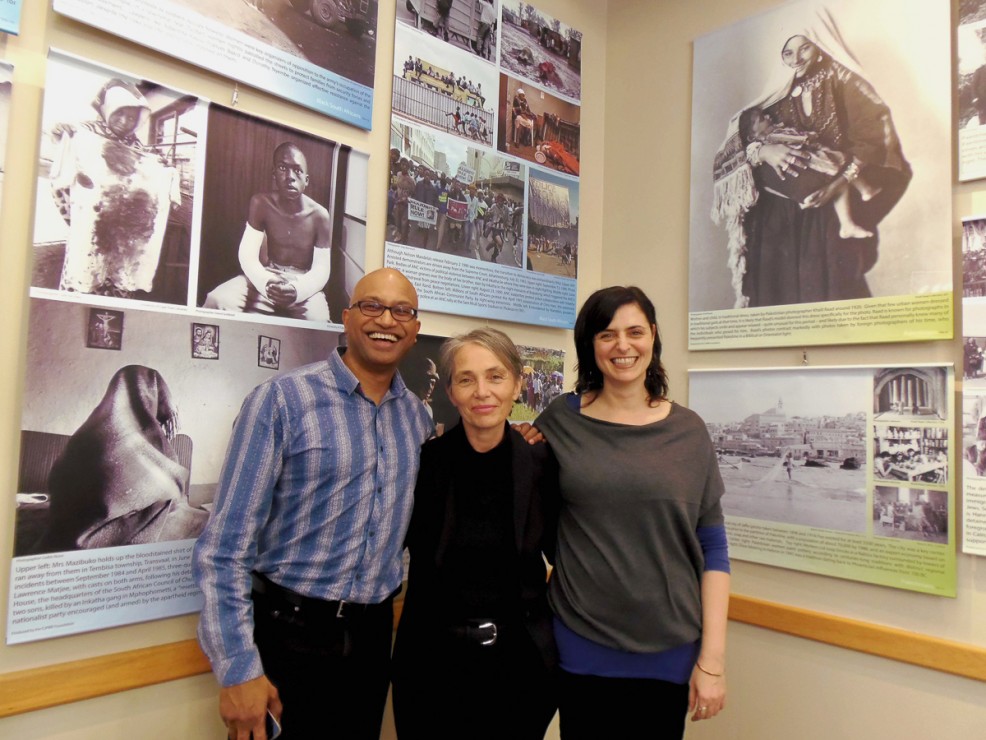 The Cedar Hill Rec Centre café initially seems like an unlikely place for an exhibit about indigenous resistance. Photos of prisons, protests, and funerals hang off three walls like an encyclopedia of oppression, lining the route between coffee and squash lessons.  That said, the organizers could not have picked a better location to engage the public. As I sat at a table in the café, there were always at least two sets of people reading the captions on the walls, often engaged in discussion or debate with whoever was standing next to them.

The advocacy group Canadians for Justice and Peace in the Middle East (CJPME) is hosting an exhibit called Dispossessed but Defiant: Indigenous Struggles from Around the World at the Cedar Hill Recreation Centre Café Gallery. The exhibit follows the narratives of indigenous peoples in Canada, black South Africans, and Palestinians in 120 photographs that range in date from the 1800s to March this year. It is scheduled to close on Wednesday May 28.

Reaching a broad audience also increases the risk of a backlash, especially when the topic concerns Israel and Palestine. On May 14th and 15th, the Arts Council of Greater Victoria received approximately 12 phone calls, mostly anonymous, condemning the Palestinian segment of the exhibit. Callers left the cryptic message that the exhibit could incite some people to cause vandalism and violence.

Justifiably worried, Bob Williams, president of the Arts Council of Greater Victoria was reluctant to follow through as the host of the exhibit. In the end, the Arts Council decided to leave the photos up just in time for opening night.

“We’ve very grateful to the Arts Council, and to Bob Williams in particular,” says Frances Everett, Victoria chapter co-ordinator of the CJPME. “I really commend him for rising above the situation.”

Though contentious, the exhibit has continued peacefully throughout the past two weeks. Responding to accusations that the Palestinian component of the exhibit does not give adequate coverage to the Israeli perspective, Everett says “We’re not trying to deny the realities that have happened to other peoples in the world or the suffering they have undergone. The purpose of the exhibit is to talk about the stories of certain indigenous people and the patterns of how dispossession takes place.”

Everett points out that the other two parts of the exhibit are equally important. The segment about indigenous peoples in Canada is intended to ground the topic of dispossession in the unceded soil beneath our feet. South Africa is included because it is ultimately a story of victory. Although some people in the Jewish community criticize the exhibit for comparing Palestine with South Africa and Canada, comparison is definitely the point. Everett argues that each group of people has experienced a similar script of dispossession, including land loss, separation of families, loss of language and culture, military confrontation, and environmental degradation. The exhibit also celebrates the way that each group of people has responded to these events with defiance and protest.

On the opening night, two Palestinian descendants, three First Nations people, and one South African shared their family histories. I had the opportunity to meet with three of them to talk about how they and their ancestors lived through the history hanging on the walls around us.

Praven Pather, a settlement worker at George Jay Elementary School, comes from a long line of Indian South Africans. In 1950, the Dutch-imposed Group Areas Act forced his great-grandparents to relocate from the land that they had farmed on for generations. They were given no compensation. Pather was a teenager during  the 1980s when Nelson Mandela was in prison and the African National Congress was banned. He and his friends went to demonstrations and distributed pamphlets asking people to vote for the ANC. Many people died during this period of turmoil. “As someone who survived, I speak with their voices too,” he says.

Leila Durzi, a family liaison at George Jay Elementary and Pather’s colleague, recounts her father’s journey to Canada. He was 12 in 1948 when the state of Israel was established and the Arab-Israeli war erupted. Durzi’s family decided to move to Egypt temporarily to escape the bloodshed. Her grandfather and uncle later attempted to return to Palestine only to find Haifa, their former home, captured by a Jewish army. Largely by luck, they survived the escape on boats back to Egypt, where they eventually managed to make a living before ultimately moving to Canada.

Nobody knows what happened to Durzi’s great-grandparents, who never left for Egypt. Letters from aid workers in Palestine arrived censored, torn to shreds.

Meaghan Champion is part of the Cowichan Tribes’ Somena Nation. She is part of the “Sixties Scoop” generation, a child of residential school survivors who was adopted by a white family after moving through the foster care system. She began looking for her biological family when she was 14 by hitchhiking back and forth between Duncan and Port Alberni, reading names on gravestones. In her 20s she was lucky to be reunited with her sister and grandfather. Since then, she says, “It has been a long process of coming home.” 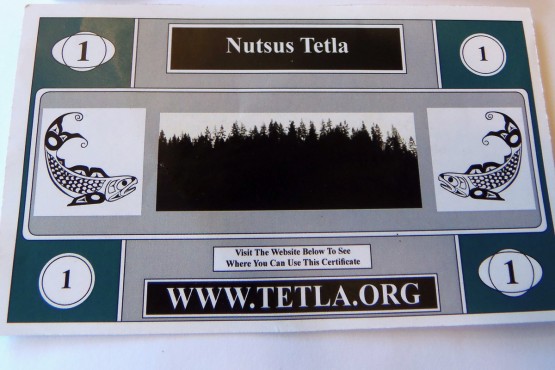 Like many forms of currency, Tetlas have security features and can be exchanged for services at many local businesses. —Emily Thiessen (photo)

In 2011, she created an alternative currency called Tetla, which means “little dollar” in the Hul’q’umi’num language. After growing up in West Vancouver and then moving back onto a reserve, she was struck by the huge wealth disparity caused by the dispossession of traditional lands and layers of damaging policies like residential schools. For example, poverty makes it incredibly difficult for the people she knows to take out loans at reasonable interest rates. Using Tetla, Champion wants to revitalize a Coast Salish barter economy where it is systemically easier for indigenous people to start small businesses. Her ultimate vision is to use Tetla to fund a centre called Snuwuyth Lelum (Life’s Teachings House) where other Sixties Scoop children and anyone interested can learn Hul’q’umi’num and become immersed in Coast Salish culture. “Tetla is my act of defiance,” she says.

Champion, Durzi, and Pather are a reminder that history doesn’t simply pick up its bags and move along without constructing the lives of living people.

As I was talking to Champion, I noticed that Everett was enrapt in a discussion with two women who had been studying the Palestinian wall for a particularly long time. As it turned out, one of them was a member of the Jewish community who was aware of attempts to derail the exhibit but supported what she saw.

This intense collection of photographs has caused more than its share of controversy, but it is provoking progressive dialogue in at least equal doses.

Correction: The original article erroneously reported that the Arts Council of Greater Victoria received 12 phone calls condemning the exhibition, 10 of which were anonymous. The figures provided were in fact approximate, not precise.