No one is quite as dangerous as a group of unhappy women, as Langham Court Theatre’s Les Belles-soeurs confirms. The play, written by Michel Tremblay and directed by Judy Treloar, deals with class tensions, gender politics, generational gaps, and the unexpected ecstasy of bingo.

It’s the age-old question: If you had a million dollars, what would you do with it? In Les Belles-soeurs, it’s a million stamps — but the stakes are just as high. Set in Montreal, 1965, the play follows housewife Germaine Lauzon after she wins a million Quebec Gold Star stamps and invites all her female friends, neighbors, and family members over to help her paste them into prize booklets, ready to exchange them for things like barbecues and lawn chairs and start her new, luxurious life. With jealous neighbors, an estranged sister, gossipy friends, and a troublesome daughter, Lauzon has her hands full. 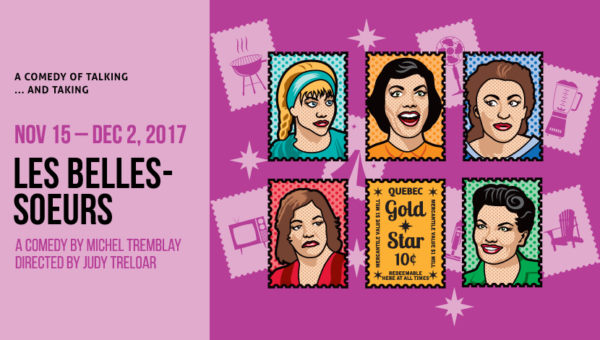 Pam Miller shines as the charming Germaine Lauzon, while Kate McCallum Pagett brings a lively energy to the stage as Germaine’s sister, Rose Ouimet. It is a wonderful and unique experience to see a production with an all-female cast, a spectacle you don’t always get to enjoy. This is a man’s world, but not in Les Belles-soeurs.

The set also adds to the intimate atmosphere of the play, featuring all the details of a small Montreal apartment. Hanging laundry, empty stamp boxes, and crucifixes on the wall help set the time and place.

Some moments in the play do bring an air of disconnect for the audience, such as numerous inappropriate sexual jokes and moments of lagging action. The best scenes involve the most activity, whether it’s mothers-in-law falling out of wheelchairs, flying saucers, or family members being chased around the kitchen.

The use of offstage action also works very well; the play often alludes to the big city outside this kitchen that traps everyone that frequents it in everyday misery. The second act brings this more solemn air, making the characters confront serious moments after a comedic beginning.

Keeping your troubles and your victories to yourself is just not something you do in Les Belles-soeurs. This is what makes it fun for the audience and aggravating for the characters, who are trapped abiding by ridiculous social rules in a changing world.

Les Belles-soeurs is about making the best out of a situation, whether that means acquiescing to an old friend, considering an abortion, or cutting your grass with scissors. It portrays the ultimate struggle between victory and defeat, set in the era of free love and pastel colours. If you’re looking for a happy ending that restores your faith in humanity, this might not be your play; if you are looking for a Canadian classic that brings emotion, timeless themes, and Québécois accents, look no further.

Les Belles-soeurs runs at the Langham Court Theatre until Dec. 2. You can find ticket information at https://www.langhamtheatre.ca/boxoffice/tickets/.