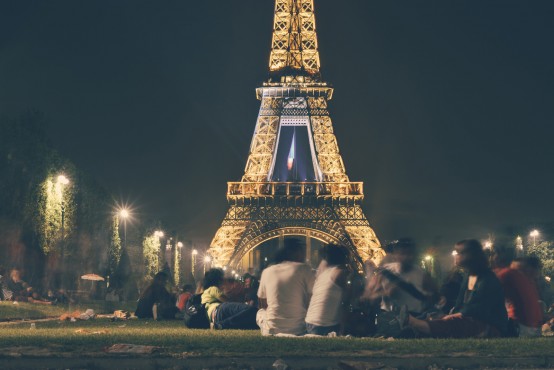 I have trouble sleeping these days. I receive too many messages from Paris beginning with “I am not OK.” Things will never be the same, they say. But the same as what?

When I was seven, I remember being very disappointed when my parents could not come to school to see my groundbreaking acting performance as “Pessimistic” for the end-of-year play. Mom told me it was because of “very mean people who put bombs in the metro.” It was 1996, and the year before, a terrorist attack had killed eight and wounded dozens in the Parisian Metro. As a kid riddled with anxiety, my heart skipped a bit each time she would say we were going to take the Metro after that. Twenty years later, I still think about it sometimes when at the Saint Michel stop.

When I was in college, my best friend lived on the Boulevard Richard Lenoir, in the 11th arrondissement of Paris. I will always remember the New Year’s Eve we spent there when I was 18. When midnight came, her parents, absolute fans of The Clash, put on “Rock the Casbah.”  My friends and I began to dance and sing loudly, spilling champagne everywhere, chain smoking on the balcony — that epicenter of Parisian social life. The Shareef may not like it, but we were having the time of our lives.

It so happens that this balcony was just in front of where the Charlie Hebdo attack took place last January. On those terrible days, I stayed there for hours, crying and trying to keep the candles lit. I was also staring at this balcony, my very own symbol of joy and tolerance. Two worlds were colliding before my eyes. Some very mean people were taking my best memories, replacing them with dead bodies and fear.

Life suddenly froze. Place de la République was the new place to meet. We proudly sang “La Marseillaise,” often for the first time in our lives, as a way to ward off bad luck.  But it was not enough, and it happened again. This time my messy friends, the ones who spilt champagne everywhere, were the target. And this time, I am on the other side of the world. It is hard for me to express the pain I am feeling, which contrasts so much with the quiet and peaceful environment we live in.

But beyond my personal distress, I can see the change that is going on in my Parisian friends. They leave Facebook to spend more time with each other. They are rereading Hemingway’s A Moveable Feast. They finally dare to say “Je t’aime” to the people they are dating. They are going back on terrasses to drink overpriced
wine and smoke hand-rolled cigarettes. Yesterday, 3 a.m. Paris time, I received a Snapchat from my friend Hélène: “We love each other too much, nobody will stop us now!” In the picture, my best friends, laughing and dancing, spilling champagne everywhere again. This is how I know these “very mean people” already lost their war: we never felt so alive.