For Master of None, it’s the little things that matter 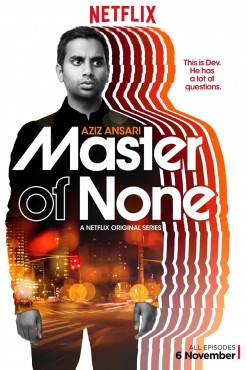 Master of None, the latest original series from Netflix, created by and starring Aziz Ansari, came along without much fanfare. I hadn’t even heard of it before I saw it on my “new releases” screen. Having been a fan of Parks and Recreation (also starring Ansari), I decided to give it a chance, but I started it without any real expectations. The general plot is a familiar one: the show follows the life of  30-something Dev Shaw (Ansari) and his group of friends living in New York City as they juggle work, a social life, and the struggle to find some purpose and direction for themselves.

One thing that immediately sets Master of None apart is that it is a polished work. Besides the high production quality that more closely resembles a movie than a TV sitcom, it quickly becomes clear that there is great attention to detail put into every scene in order to pack the most value into the show’s 30 minutes. Each episode has a narrative specific to it, often about issues that are rarely dealt with in television such as how senior citizens are treated (“Old People”) or how exciting new relationships often become routine and dull (“Mornings”). In this sense, each episode could almost be thought of as a standalone feature that provides a bit of social commentary, insulated with quick, witty dialogue, and a sort of quirky charm.

The show excels at examining issues without getting too preachy. Within the larger issue of each episode, the focus is often on the small day-to-day things that come out of that episode’s premise. In the second episode, “Parents,” for example, Dev talks about how his parents went through so much trouble, immigrating to America just to give him a chance at a better life, and yet he can’t be bothered to help set up his father’s new iPad. I think everyone can relate to the argument Dev and his girlfriend Rachel (Noël Wells) have over how to properly use a tube of toothpaste — a great example of how the most trivial things can drive you crazy when you live with a significant other. It’s the inclusion of moments like these that gives Master of None an immediate depth that takes many shows half a season or more to find.

The writing can sometimes be stretched a little far to elucidate the episode’s premise and the acting stumbles occasionally; Dev’s parents are played by Ansari’s real-life parents, who are clearly not professional actors, but the raw chemistry is part of what helps the show sink in. Not every episode is a home run either.  I found that “Parents” dragged a little bit by telling the detailed backstory of both Dev’s and his friend Brian’s (Kelvin Yu) fathers, but I can appreciate the boldness in writing an episode that focuses so much attention on the main character’s parents, especially in the show’s second episode. I suspect different people will have different episodes that speak to them instead of there being a consensus favourite.

And that’s where the show reveals its greatest strength: being relatable somehow in every episode, even when dealing with topics that are quite specific. Like all good works of art, Master of None shines a light on how we handle things, both big and small, in our own lives.