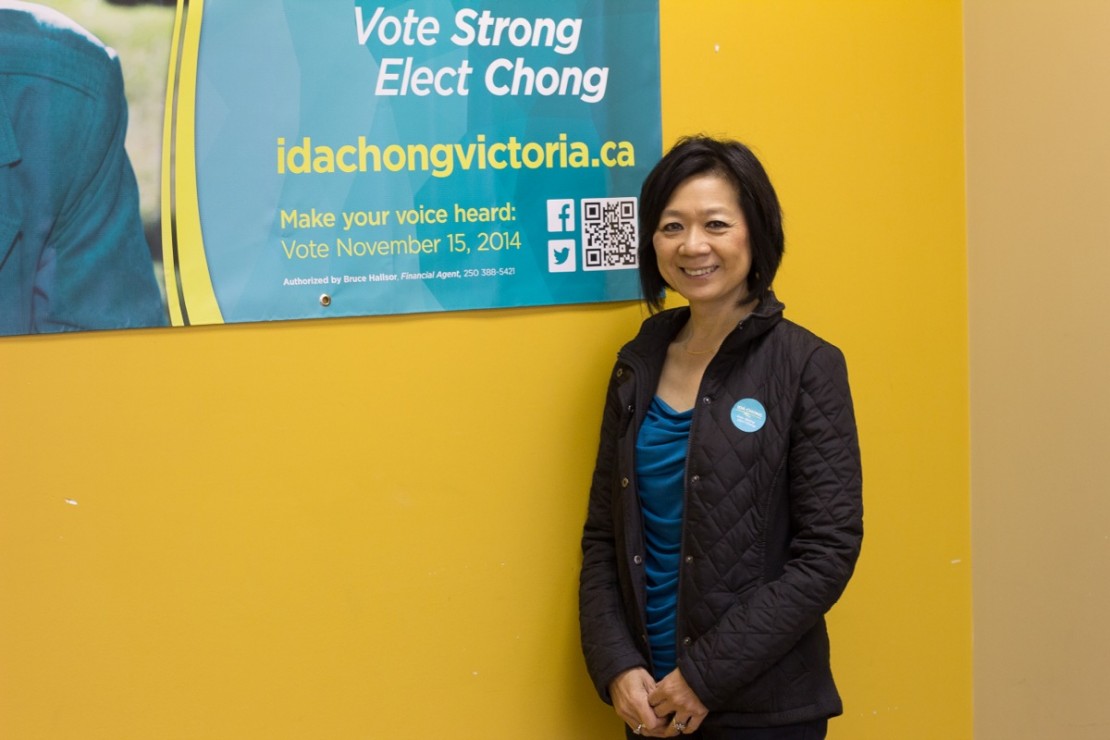 Before she was running for mayor, and before she was a B.C. Liberal MLA, Ida Chong was a certified general accountant and a self-proclaimed problem solver. As she likes to point out, people would come to her with their problems and it was her job to fix them. Now, as she steps onto the political platform once again—this time running for Victoria mayor in the Nov. 15 election—she hopes to continue this problem-solving mentality.

“I don’t grow problems. I don’t create problems, but I believe in solving problems,” said Chong. “That’s what I did as an accountant. When people came to see me, they came to me because they had a problem.”

A lifelong CRD resident, Chong has seen her fair share of changes to the capital. While not all changes are ones that Chong approves of, she has big plans for the improvement of the city if she’s elected. Breaking her platform into halves, she is adamant about her commitment to fiscal accountability and strong leadership.

On the fiscal side, she pledges to freeze property tax rates, and invest further in critical infrastructure.

“I’ve been talking to people, everyday people, who have told me that there are some things that they are concerned about, and one of the first things out of their mouths is ‘I know you can’t do anything about income tax,’ but they said property taxes were a big thing,” Chong said. “So I looked into it, and in the last six years, the residential, municipal tax rate has increased incrementally—an accumulative amount of 34 per cent.”

Chong has said that it is possible to freeze this rate for up to four years. Furthermore, using the analogy of maintaining a car, she expressed her wishes to invest in infrastructure now in order to save money later. “If your oil filter is gumming up and you let it go, you can ruin your motor. Is it better to fix it, replace it, or wait until you destroy your entire vehicle?”

Feeling that the city needs better leadership, she has further promised to fix the blue bridge “boondoggle.”

“I’m not saying the mayor needed to micromanage the project, but that he needed to show that he was in charge. I said, as mayor, I will step in and fix the boondoggle.” Chong went so far as promising to show up each week at the work site in steel-toed boots and a hard hat.

When asked about student’s concerns, such as transit issues, low income housing, and future job security, Chong promised to listen when needed. If elected as Victoria mayor, she could not affect housing prices in Saanich, but she made it clear that if students have a problem that she can help with, they could come to her to work it out together. “I will listen before I make a decision and act on it,” she says. “I will try to find all the information and resources I need to see if we can do it.”

Further, Chong promises that her focus on infrastructure will boost the city economy and help create jobs in the future. “When you invest in infrastructure, you will send a message to people as well who want to invest in downtown Victoria.”

Chong was confident in her plans: “I know it’s easy for candidates and mayors to promise the world to everyone who comes [to talk]. I’m not that kind of a candidate. I will promise on what I know I can deliver on. I also promise to work hard. I promise to listen.”