Fur and fun at the Belfry 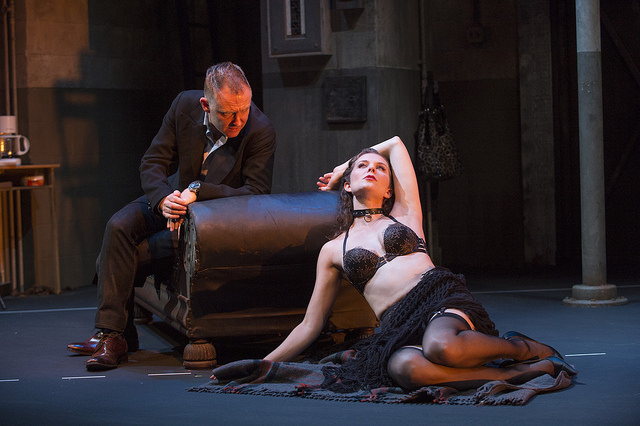 The most-produced play in North America this season, Venus in Fur, by David Ives, premiered off-Broadway in 2010. It centers on Thomas, a New York playwright and director auditioning actresses for his stage adaptation of Leopold Von Sader-Masoch’s real-life 1870 novel Venus in Furs. (The term ‘sado-masochism’ is inspired by him). Enter Vanda, a scattered young woman with a Brooklyn accent, and the show alternates between reality and the two acting out scenes from Thomas’ script.

The play-within-a-play concept is always entertaining, as is actors playing actors. Indeed, the self-conscious nature of the script gives it much of its charm. The characters acknowledge the physical power that comes with sitting or standing, whereas in a typical play those levels are symbolic. Onstage costume changes also work on a self-conscious level, and stage directions read out loud from Thomas’ script as the characters act them out, are powerful.

The Belfry has a track record of selecting strong performers and Celine Stubel and Vincent Gale, as Vanda and Thomas respectively, are no exception. Both are impressive as they switch accents, Vanda between Brooklyn and her character’s German, Thomas between his regular voice and a posh trans-atlantic. These changes indicate to the audience whether or not the characters are play-acting, and get purposefully murky near the end, when the line between reality and fiction blurs. The script is surely challenging, and Stubel and Gale execute it almost flawlessly.

It can’t be the most comfortable experience to bare so much skin onstage, but Celine Stubel’s performance is captivating, perhaps more so than Gale’s. She gets most of the show’s laughs, and the combination of Vanda’s naïvety, earnestness and sharp intelligence are endearing from the moment she walks onstage. For me, her performance is truly what makes this show a success.

A beautiful set, and great use of sound, light and music. The single 100-minute act is thought-provoking, engaging, and most of all, fun, throughout.

Venus in Fur runs at the Belfry Theatre until December 14. Visit belfry.bc.ca for tickets and more information.