Getting red, hot at the Roxy

It’s 25 degrees inside the Roxy Theatre, and nearly every patron is batting at the air around them with their playbills. Some audience members are carrying bubbly pink cocktails purchased at the live bar set up on centre stage, and others are seated at cabaret tables circling the stage. There’s a smattering of polite applause as the live band goes through a series of showtunes.

Red, Hot Cole! is the last show of Blue Bridge Theatre’s summer season, and it concludes a summer season curated to deliver classical theatre from the first half of the twentieth century. Conceived and directed by Darcy Evans, the show is a performance tribute to Cole Porter, a renowned musician from the mid-1900s who wrote musicals during the form’s heyday.

The play revolves around fictionalized versions of the actors preparing to put on a show about Cole Porter — Sara-Jeanne Hosie and UVic alum Kholby Wardell play childhood-friends-turned-lovers, while Jennifer Gillis and Jacob Woike play an actor-doctor couple five years into a relationship. Hijinks ensue, involving food poisoning, miscommunication, and clowns. 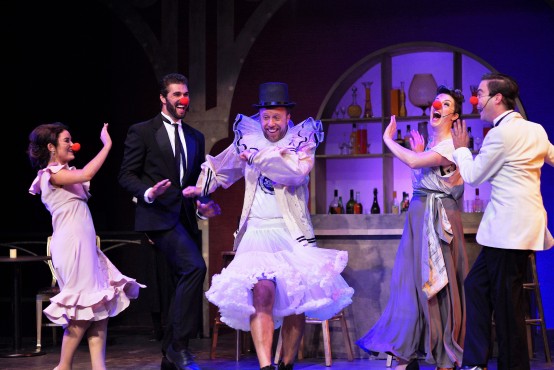 The plot doesn’t dig deep into character or motivations, but focuses on squeezing in as many songs as possible while trying to maintain a coherent direction. In some places, the story and the characters are contorted to fit the arrangement of music. Particularly in the first act, where most of the action occurs, the speaking dialogue squeezed between songs is often expository. I found myself wishing for a better balance of character development, plot, and song somewhere in the vein of Mamma Mia!

Despite the pitfalls of plot and characterization, this show is a lot of fun. The singing and dancing is Broadway-quality, enjoyed without the flights and travel time to get to New York in the first place. All four actors are given ample opportunity to display their vocal talent, from Wardell’s wonderfully comedic “Tale of an Oyster” to Hosie’s powerful act-closer “Get Out of Town.” Gillis commands the stage from her first bars of “I’m Throwing a Ball Tonight,” while Woike shines in “C’est Magnifique.” When the cast comes together as a full company, as in the audience favourite “Be a Clown,” their energy is infectious and it’s obvious their chemistry expands beyond the stage.

One standout feature of the show is the impeccable costume design by Graham McMonagle, which artfully balances the styles of the era and contemporary aesthetic. Regular costume changes from the cast continually draw attention to McMonagle’s excellent work and reinforce thematic and tonal changes between songs. For the two women, a consistent colour theme was notable, with Hosie wearing a variety of grayscale and Gillis in gentle pinks. One of the most striking costumes is Hosie’s billowy silver pants, white top, and shawl belt, which is something that I’d even consider wearing to a formal event.

The show itself is certainly tailored to an older crowd — a few folks will sing quietly to some classic songs and others stare up at the stage with huge smiles on their face. I’ve never delved far into show tunes, but it’s extremely rewarding when a song comes up that I recognize, like “Anything Goes” or “You’re the Top.” If you’re a theatre student or even just a musical fan, Red, Hot Cole! is an excellent opportunity to rediscover old classics and potentially introduce yourself to lesser-known songs.

Red, Hot Cole! runs from August 1 to 13th at the Roxy Theatre on Quadra Street. Evening shows start at 8pm, and there are matinees on Wednesdays at 1 p.m. and Saturdays at 2 p.m.