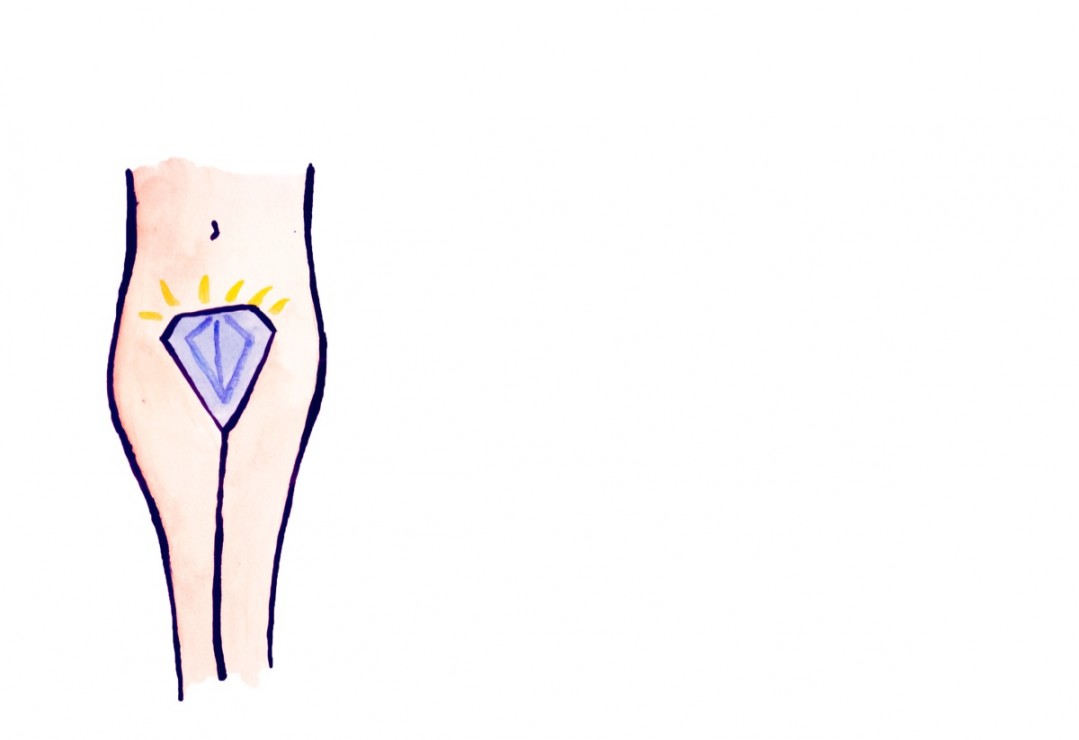 “Vajazzling”—the trend where women bejewel their vaginas—has become one of my fascinations. It’s a fancy way of telling your crotch: “Hey, you know, you’ve always been there for me. Let me make it up to you by sparkling the crap out of you.”

This genital adornment first started trending when Jennifer Love-Hewitt mentioned she “crystalled [her], um, precious lady,” on Lopez Tonight in 2010. Since this declaration of progressive womanhood, I dreamt of the day crystals would grace my vagina, and that day has finally come.

Google led me to The Foxy Box, which offers both waxing and vajazzling services. Since vajazzling is typically paired with a Brazilian wax, I figured I might as well get the full experience—who am I to half-ass my vaginal pampering?

The waiting room resembles the Oracle’s living room from The Matrix (if she moonlighted as a sex therapist). Laid out in front of me are stick-on patterns for my potential vaginal glitter: skulls, anchors, flowers—the world was my oyster. Unfortunately, they only have two “6’s”, one short of my initial plan, so I choose a set of hearts and lips with fangs poking out. They remind me of the movie Teeth—a black comedy about a girl with a ‘condition’ called vagina dentata, and her vagina won’t stop eating everyone. That doesn’t exactly justify why the design appealed to me, but I was feeling nostalgic about the movie that had imprinted my adolescent mind.

The esthetician begins waxing my cooch and my face retains a look of sheer horror for the next 20 minutes. When I think it’s almost over, we enter phase two of the Brazilian: tweezing. I’m not going to reflect on it because I’m trying to move on from what took place in that room. All I can say is that I almost wrongfully struck April—the esthetician—when April was only doing her job.

She holds up a mirror and asks if I like it. Peering down at the raw flesh, which resembles Rufus, the naked mole rat from Kim Possible, I smile. “Oh, yes, that’s beautiful. Thank you!”

I’ve been waiting for phase three (the vajazzle) for approximately five years, and it has finally come. April places the designs according to her free will—I told her to surprise me because I wanted her to feel that this was her artwork as much as my own—and it resulted in a shimmering crimson vagina.

Before leaving, I purchase a vacuum bottle that reads “Vagician” as a memento of my day (or life in general). I can’t wipe the stupid grin off my face while walking down the street. I am the dancing queen. I reign supreme with my vagina disco ball, and I’m ready to tackle life from this fact alone. Mind you, it’ll only last for a week tops, but hey, that’s better than an unadorned vagina (right? maybe?). So treat your vagina like a proper lady. Buy the damn thing some jewels that will scare the crap out of you every time you take a piss. Be awed at the pubic hairs, confused as to what the hell is blocking their way, and marvel at the sheer pointless wonder that is vajazzling.