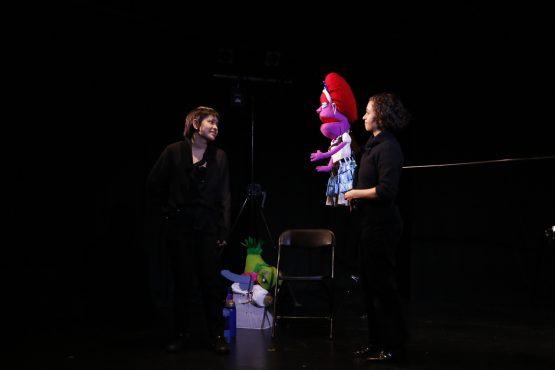 Going All the Way, provided by Theatre SKAM.

Sometimes, an intermediate is needed to convey a person’s true feelings.

Going All The Way is a play about two friends, Avery and Beatrice, as they finish up university. For their final fine arts project, they decide to teach sex-ed — with puppets. The play follows the friends as they attempt to maintain the interest of a middle-school audience, while their own problems threaten to emerge.

Much of the show’s humour and drama comes from the embarrassment felt on behalf of Avery and Beatrice, as they accidentally blurt out secrets and overstep personal boundaries. Going All the Way never ignores its framing device — the performance is in itself simply a school presentation for a bunch of uninterested kids. This basis — that keeping the kids’ attention span is hopelessly out of reach while the performance begins to go awry —  is what propels the play from comedy to personal drama. It’s a unique brand of humour that may not appeal to everyone.

But this is also a puppet show.

The puppets are well designed, even Chlamydia and Gonorrhoea, and they’re distinct, like Aunt Flo, Bird, and Bee. But a good puppet is only as good as how it’s performed, and actors Ty Wesley and Loreto Espinoza do a great job with them. The puppets never feel separate from the actors, instead they function as an extension of characters Avery and Beatrice. Near the end of the play, when everything has fallen apart, secrets are revealed in front of the class of middle-schoolers and in a moment of poignancy, the two friends can only truly be honest with one another through the puppets.

Speaking to the actors, both manage to balance the difference between being “on” for the class and “off.” Avery, played by Wesley, cares less about the class than Beatrice does, but it never feels like Wesley isn’t giving the role their all — as shown through the show’s more dramatic moments. Beatrice, played by Espinoza, is more involved than Avery, and is a strong contrast to Avery’s laidback attitude. This odd-couple setup allows for the comedy of the piece to shine, and for tension to build towards the end.

Despite the sex-ed class being a framing device, the play has something to say about how sex education is taught too. Going All The Way’s script had a sex-ed consultant, Dr. Leah Tidey. The play’s sex-ed class uses real lessons and terminology with the intent of informing kids about sex. It’s not just window-dressing for the plot to move forward, it’s a proper sex-ed class. Without the rowdy audience, missing puppets, or personal drama, the play’s sex education may even translate to a real-life classroom setting. You almost feel disappointed when the sex-ed class ends early due to the said personal drama. The creative team didn’t have to put so much thought into it, but it helps legitimize the play.

It’s a short show about sex, puppets, and the anxieties of life after university. Underneath it all are two friends who realize that their lives are going in different directions. It says what it needs to say, and it ends on a sweet note.