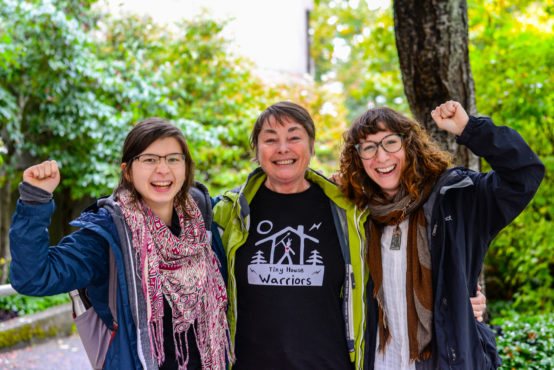 Beginning Monday, Oct. 15, the lawn by Felicita’s Pub outside the Student Union Building (SUB) at UVic will become a temporary construction site for a tiny house on wheels. Led by a group known as the Tiny House Warriors (THWs), the home will go to helping Secwepemc families reclaim their traditional territory.

This UVic project will be the fifth house to be built by the THWs out of a total goal of 10 houses. The houses will provide shelter for Secwepemc women, girls, and elders, while offering sites of resistance — particularly in opposition of the Trans Mountain Pipeline Expansion project.

“The whole Tiny House Warrior movement has been organized and founded by Kanahus Manuel,” says Catherine Wallace, a lead organizer of the build who was also involved in the first tiny house build on Secwepemc territory back in 2017.

Kanahus Manuel was at Standing Rock resisting the Dakota Access Pipeline when the idea for Tiny House Warriors came to her.

Kanahus Manuel is a Secwepemc mother, birth keeper, and traditional tattoo artist, and was at Standing Rock resisting the Dakota Access Pipeline when the idea for Tiny House Warriors came to her.

“At one point there were over 10 000 people there, and she saw that they were building one tiny house every two days to house all these people,” Wallace says.

“This gave her the idea that a great thing to do to stop the Kinder Morgan [Trans Mountain Pipeline expansion] is to have tiny houses on wheels to be in front of the pipeline as a protest to stop it.”

From there, the Tiny House Warriors were designed to “go big by going small,” as one quote from Kanahus Manuel puts it.

Beyond providing shelter, the tiny houses will provide safe physical and cultural spaces for women, says UVic PhD student Stacie Swain, another lead organizer of the build. They’ll also be a space for elders to pass on knowledge.

“The proposed pipeline would include an industrial man camp that would put Indigenous women, girls, and children in danger,” she says.

UVic undergraduate Emily Thiessen, an early member of Divest UVic, says the project’s power comes from its unique way of bringing together many people over many issues.

“It’s a symbol of the better world and the decolonial world we want to see,” she says. 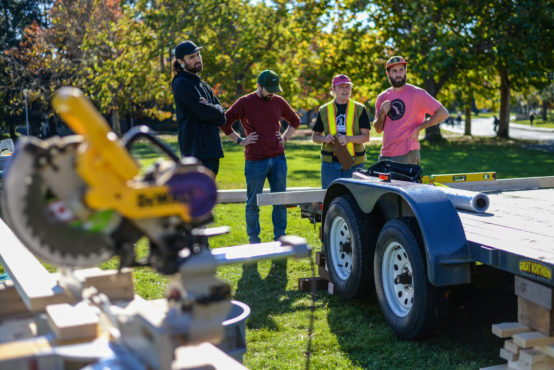 “[The project] already is bringing together a ton of different people on campus who don’t normally work together …  The tiny houses are taking on sexualized violence, as well as reconciliation, decolonization, as well as climate justice and protecting water.”

University administration set out nine challenging conditions for the organizers to meet — including insurance, security, and fencing — before the university would condone the construction. The group was able to fulfill these requirements just in time to start on schedule.

Swain says she recognizes the need for UVic’s oversight of such projects, but expressed concern that the UVic Indigenous Plan and other university initiatives that promote reconciliation and indigenization sometimes stand in contrast to administrative barriers and a lack of resources.

“After it’s built, we’d like [the tiny house] to serve as a hub for anti-colonial activity.”

Thiessen points to the institutionalized nature of the university, where jumping through unnecessary bureaucratic hoops is the norm if you’re a grassroots movement like the Tiny House Warriors.

But while the organizers all expressed exhaustion at the bureaucratic process, they emphasized how the project will make UVic a richer educational space, long after it is built. 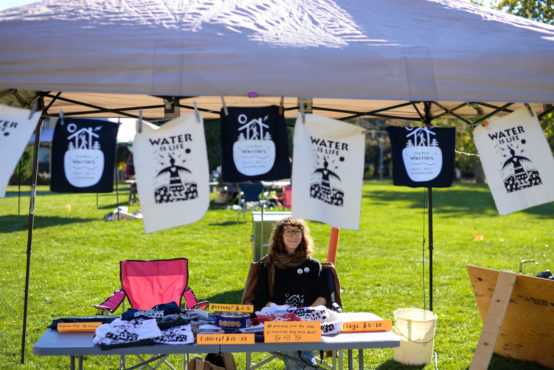 Stacie Swain, one of the lead organizers of the tiny house build. Photo by Mike Graeme, Senior Staff Writer.

“In providing the space here for [students] to learn about Secwepemc, [and] to learn about the territory they’re on — the Coast Salish territory — I think [they] will then take that into the rest of their lives and their everyday lives, and their other communities.”

For such a tiny house, the project appears to hold great potential for reconciliation at UVic and beyond.

All people with a variety skills are welcome to participate in the Tiny House UVic Build. The project has, at the time of writing, reached over half its fundraising goal of $15 000. To donate visit https://chuffed.org/project/tiny-house-warriors-resurgence-edition