The good, the bad, and the hairy: the horse-drawn carriage debate rages on 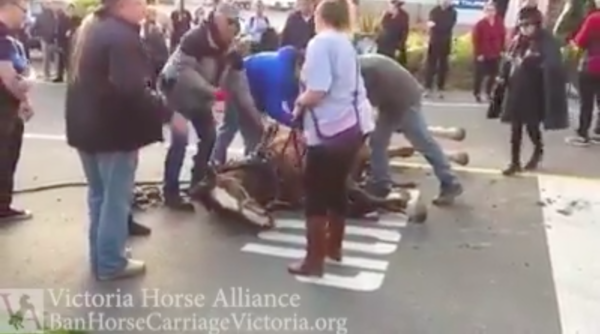 A still from the video of the incident that occurred on May 4. Photo via Victoria Horse Alliance on Facebook

Horse-drawn carriage rides have long been a controversial topic on the downtown streets of Victoria. From angry honking drivers, to protestors walking with signs, to those just being concerned with the horses’ overall safety, most people have an opinion.

Following an incident on May 4 where a horse was spooked and fell following a minor collision with a tour bus, the British Columbia SPCA called for the banning of horse-drawn carriages within Victoria. While they have previously suggested stricter guidelines than those that currently exist, this is the first time the non-profit has called for an all-out ban on the popular tourist attraction.

With Victoria Carriage Tours, these rides can range anywhere from $19 to over $200. Most tours trot around James Bay or Government Street, highlighting the historic aspects of the city in a traditional way.

While the Times Colonist has posted an editorial and several opinion letters from locals claiming “the horses are just fine,” I could not find an article arguing for the banning of the carriages on their site, despite their replies on Twitter being packed with opposition to the carriage rides and their Facebook page being torn apart by the opposing sides in the comment section.

“Completely misinformed attempt to get rid of what little charm Victoria has and remove a bunch of jobs for working horses and people who love horses, because a few bad drivers are inconvenienced,” Bruce Lane commented on a Facebook post by the Colonist. “These horses get better veterinarian care than any boarding horses do. They get proper horseshoes designed for the pavement and they look forward to their jobs.”

“Go sit at Beacon Hill Park on Douglas and watch. They hold up traffic, the horses are clearly not happy. There are endless tour bus, city buses, dump trucks, double decker shuttle buses following and passing these poor creatures,” @EntitledCanada responded on Twitter. “they shouldn’t be subjected to this.”

The necessity of horse-drawn carriages have long been a heated debate in Victoria, but with opinion still split, the only thing we can do now is sit like the horses and wait to find out their fate.