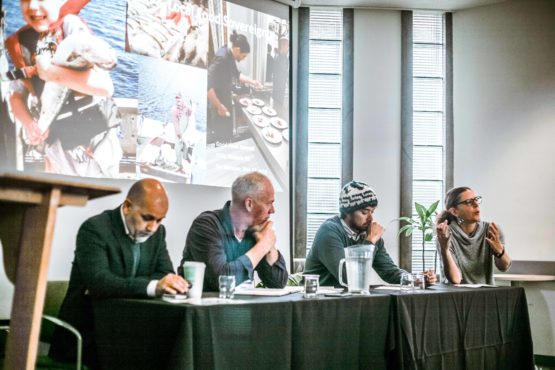 “[This summit] brings all the discrete elements who are not ordinarily in the same room together,” said UVic Environmental Studies professor Jeremy Caradonna, who gave a presentation at the summit about the values and challenges of transitioning to certified organic production.

“Just being here for the last few minutes, I’m seeing people from LifeCycles, I’m seeing academics from UVic, I’m seeing farmers. Getting us all in the same room is important because there are very few venues for that around here.”

One of these parties not often in the same room are the island’s First Nations. Tiffany Joseph, apprentice of SENĆOŦEN Language & Culture Revitalization and participant in the SṈIDȻEȽ Resiliency Project, spoke at the summit about what food means to her W̱SÁNEĆ and Sḵx̱wu7mesh culture. 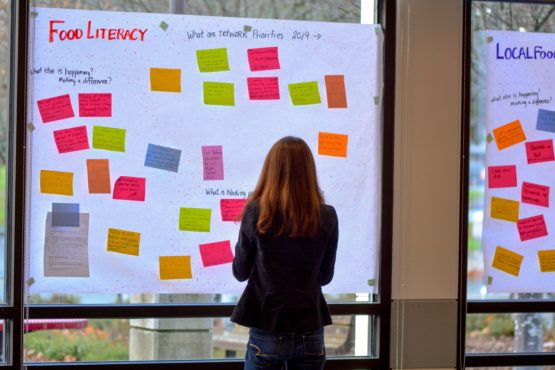 “Food is medicine. That’s why I call the Indigenous Food Gathering, ‘ÁLI SDÁLṈEW̱’ — all the good medicine,” said Joseph to the room of people, referring to a food-related event from June 2018 that was also sponsored by CRFAIR. “We can’t live without all of these good medicines.”

Joseph’s message for those at the conference was to treat these medicines and the land they grow from with respect, and to remember that the land holds many layers — including Indigenous food systems.

Environmental Studies and Geography alumnus Em Bellinger, who is now CRFAIR’s Communications and Engagement Coordinator and the lead organizer of the summit, said decolonizing the summit is a priority.

“There is work happening to attempt to decolonize our own selves and the network,” she said. “[Supporting] the work of folks of colour and whose voices are missing at the table is an important piece that we’re moving towards.”

The Anti-Oppression Training session was one such decolonizing feature of this year’s summit. CRFAIR is also working on diversifying their leadership group, Bellinger said.

“Less than 10 per cent of the food that’s available to us to eat in this region is grown locally.”

CRFAIR has been holding these gatherings since the early 1990s and they have been constantly evolving to best meet current issues, while continuing to work for their original purpose of creating a network for food security in the Capital Region.

When Bellinger was a student at UVic, she worked at the Campus Community Garden. CRFAIR opened her eyes to the need for building connections between different sustainable food initiatives.

“CRFAIR was a catalyst for that way of thinking, of making sure that we’re working together as a food hub, instead of all working on similar projects but not together,” said Bellinger.

Getting connected to the food hub was the reason young farmers Benjamin Kjernisted, Garrett Simon, and Ethan Smith found themselves at the summit.

“[My grandma] signed us up and we came and it turned out to be much more than we thought it was going to be. It’s been incredible, there’s so many great minds here,” said Kjernisted, whose grandmother is also the reason they have access to farming land on Vancouver Island.

The three farmers, ages 22 to 24, recently moved from Vancouver to North Saanich, where they started farming on Kjernisted’s grandmother’s acreage and co-founded the food production company Farm Or Die.

“We decided to start our business here to leap the hurdle of land access which is the big thing in Vancouver,” said Simon. “If you want to farm urban you’ve got to approach backyards and rich communities, gated communities, to try and find space that someone will let you grow [on].”

Still, Simon said even without access to land anyone can get a start on growing food.

“You can start in your own basement with sprouting. [In Vancouver], we had just an incandescent light on the counter and we were already growing produce that was of quality to go to market. You can start at any scale with agriculture. The only barrier is your fear of starting.”

A main reason the three farmers started growing produce was their own lack of access to local food. 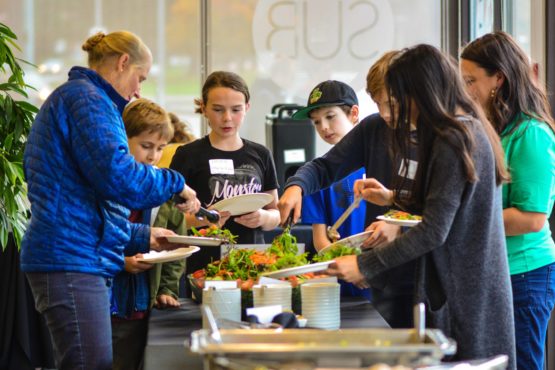 “We’re really passionate about urban agriculture because I feel like cities are a deadzone for local produce,” Simon said. “You go to a grocery store and it’s really hard … You struggle to find local things.”

“Less than 10 per cent of the food that’s available to us to eat in this region is grown locally,” said Patricia Reichart, board member of CRFAIR, at the summit.

Reichart is part of a recently created leadership group which has arisen from the backbone of CRFAIR to help get the local food system thriving on Vancouver Island.

All panel speakers agreed that UVic could be doing better when it comes to supporting the local food economy.

“It would be awesome for UVic to commit to buying more locally and sustainably-sourced food,” said panel speaker Riley Yakabuski.

“Ideally universities would make meal plans optional and then give spaces on campus where people can learn and can cook for themselves.”

Yakabuski was part of initiating the Stop Starbucks UVic movement, which claims UVic is making a mistake in its plan to push out local bakeries and coffee roasters from Finnerty Express Cafe to house the Starbucks franchise.

Yakabuski is also head coordinator of the Community Cabbage, which has been attempting to get a community kitchen at UVic for years in order to help students develop cooking skills while learning about nutrition.

“Ideally universities would make meal plans optional and then give spaces on campus where people can learn and can cook for themselves,” she said.

UVic food waste was another topic of conversation.

“As much as it is awesome that we have our great sustainability office that does great recycling education … we still waste so much and people aren’t educated on how the processes are actually happening and … how much [single-use packaging] really adds up,” Yakabuski said.

As the table is cleared and yet another Good Food Summit came to a close, participants dispersed like sprouts of a growing network aiming to bring us closer to a healthier relationship with our food.

To learn about upcoming events hosted by CRFAIR visit http://www.crfair.ca/.