Greater Victoria Shakespeare Festival gets nautical in its 28th year 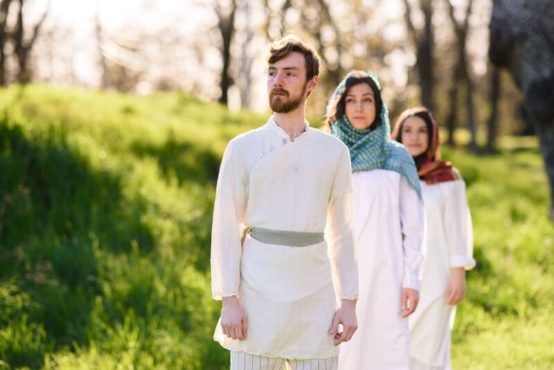 To watch The Tempest, Pericles, or both — for Shakespeare fans in Victoria, that is the question.

Returning for a 28th season, the Greater Victoria Shakespeare Festival (GVSF) is set to debut two of Shakespeare’s nautical-themed plays this summer at the Camosun College Lansdowne Campus.

“There are certainly Shakespeare’s greatest hits, and you want to program those once a season,” GVSF Artistic Director Karen Lee Pickett said. “I also like to look at programming a lesser-known play, a play that maybe people haven’t seen . . . It also happens that both these plays have to do with sea voyages, shipwrecks, and have a nautical theme as well.”

The Tempest chronicles Prospera, the Duchess of Milan, and her daughter’s tribulations after being stranded on an island for twelve years. Prospera, who is also a sorcerer, uses magic for payback against her jealous brother Antonio and her close ally King Alonso.

Pericles, the lesser known play of the two, follows the marine travels of the young Prince of Tyre after he eavesdrops on some damning information about the king of Antioch’s personal relationships.

“I presented Karen with the idea of presenting Pericles, because to me it’s one of his strangest and most intriguing late plays, and it’s not one that’s often done,” Director Christopher Wedell said over the telephone.

Wedell believes the play is timely in how many of characters are looking for home by crossing vast stretches of water, similar to the ongoing migrant crisis in the real world.

“People are looking for home, looking for sanctuary, looking for a place to belong and whether that be with family or in a new homeland. So it really struck a chord in me emotionally.”

Wedell, a founding member of the renowned Bard on the Beach Shakespeare Festival in Vancouver, is making his return in the GVSF in 2018 after a two-year hiatus. He directed Romeo and Juliet in 2015, and he credits the special allure of the Victoria community for his return.

“It’s a unique setting, the Camosun grounds,” Wedell said. “You could be sitting there and the actors may be joined by a deer some time in the evening. There’s something very special about seeing Shakespeare in the open air, be it at the Globe in England or here in Victoria.”

Shakespeare is notorious for causing students to shrug their shoulders and roll their eyes, however Pickett believes this is because students are subjected to read Shakespeare’s work and not watch it live — like it was designed to be viewed.

“I personally think that often Shakespeare is ruined for people in school,” Pickett said. “Because they have to read it, and they have to analyze it. And it is difficult, it’s a difficult text, it’s not a style or a language that we use today.

“These are plays. They were never meant to be read. They are meant to be performed and they’re meant to be experienced as an audience. So, I think that’s why people respond to coming to Shakespeare, even if they’ve been ‘injured’ in school, and have this feeling about it. Once they see it performed that will fall away.”

Pickett believes this shows in past seasons of the GVSF, where audiences of all ages have flocked to the grounds of Camosun College to watch Shakespeare’s finest works.

Pickett recommends if families want to bring their children to a more ‘family-friendly’ play, that they watch The Tempest, as Pericles does have some more grim moments.

Rehearsals have already started for the 2018 season, and the first showing is scheduled for July 5 (Pericles). Pericles will then run every Tuesday, Thursday, and Saturday at 7:30 p.m., while The Tempest will play on Wednesdays and Fridays at 7:30, and Saturdays at 1:30 p.m.

Both shows will run until July 28 at Camosun College. The Tempest will continue at Saxe Point Park in Esquimalt at on Aug. 2, 3, and 4 at 7:30 p.m. Children under the age of 12 can watch for free, seniors and students pay $21, and adult tickets cost $26 for a single play.

For more information on ticket prices and showtimes visit vicshakespeare.com