Growing momentum across Canada fuels the fire for divestment at UVic

As the debate rages around the future of fossil fuels in public industry and private life, university campuses have become a hotspot for pushback against investing in companies that deal in non-renewable energy.

Recently, the divestment movement (divestment being the act of withdrawing invested funds from fossil fuel companies) won its first major victory: a February 2017 decision from the University of Laval in Quebec City announcing that the university would take “responsible action to switch its endowment fund investments in fossil energy” to other industries.

Now, after years of lobbying, students across Canada have their first indication that pressure can pay off.

Natalia Karpovskaia, a fourth-year Political Science major, is one of those students. Together with her fellow members of Divest UVic, she believes Laval’s decision means UVic has no excuse to not rescind its investments in fossil fuels.

““For me, personally, [Laval’s decision was] a motivation to really amp up my terminology when I’m speaking to the university,” Karpovskaia says. “UVic is very well known for its environmental focus and its sustainable energy that you can see everywhere on campus, and yet they’re the university that has not divested. [Laval’s decision] just kind of refired my heart for the matter because it’s really frustrating and stupid.”

According to 2015-16 financial documents, UVic currently has approximately $32 million invested in fossil fuel holdings, amounting to approximately eight per cent of the university’s total holdings. Many of those individual holdings have gone down in value from their original cost.

For Karpovskaia, the move towards divestment makes sense on a number of levels. “There’s the moral side and the [economic] side . . . it’s just immoral to finance the destruction of our climate,” says Karpovskaia. “The economical side [is important] because it’s economically just not feasible to keep investing in fossil fuels. [The university] is actually losing money.”

Divest UVic was founded in 2013, with Karpovskaia joining the group in 2015 to volunteer in support of a referendum that would have the UVSS lobby the university on behalf of Divest. The referendum passed — with 77 per cent of students in favour — and Karpovskaia has been working for the group ever since. 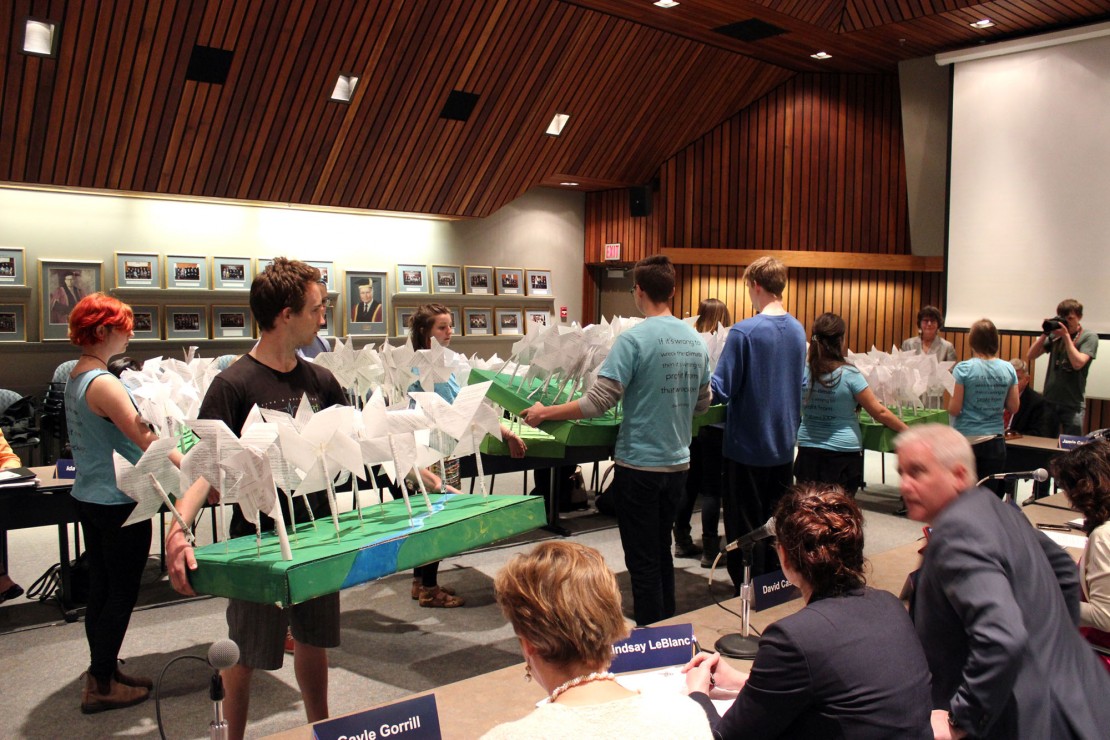 Divest UVic presents the UVic Board of Governors with over 200 handmade wind turbines made from student petitions in April 2016. File photo by Myles Sauer

The group’s positive relationship with the UVSS is not expected to change with the turnover of board personnel in the spring. “The incoming board fully supports the divest movement,” said Kate Fairley, UVSS director-elect of university relations and outreach. “I hesitate to give precise plans, as Divest is continually growing and evolving, but we will definitely give as much support as we can.”

As it stands, Divest’s time is spent lobbying and understanding the UVic Foundation, the board responsible for controlling and distributing UVic’s investments. The group is also in the middle of planning an action for Monday, Apr. 3 — though Karpovskaia, smiling, declined to say exactly what that would entail.

While discussion with the administration is an arduous task —the Board of Governors has in the past opted to respect the Foundation’s own autonomy in making decisions related to endowments —Divest UVic will continue to work with students to promote the idea of a university that uses its investments to reinforce its image as a leader in sustainable energy. And Karpovskaia hopes that students will be inspired by Divest’s commitment to a fossil free future.

“I think that even if every single person that we reach out to, even if they don’t get super involved, they’re still having those conversations with their friends, and they might take that into their lives in different ways,” says Karpovskaia. “Maybe 10 years down the line they get involved in climate justice activism or they get involved right now, but I think that the potential is there for every person.”

Come say hey, and help us clean up the oil spill @UVic caused by investing in oil spills! Grab a snack and help support the @UVSS Food Bank! pic.twitter.com/bZK1UCllgR