A world where anything can happen, especially with audience participation 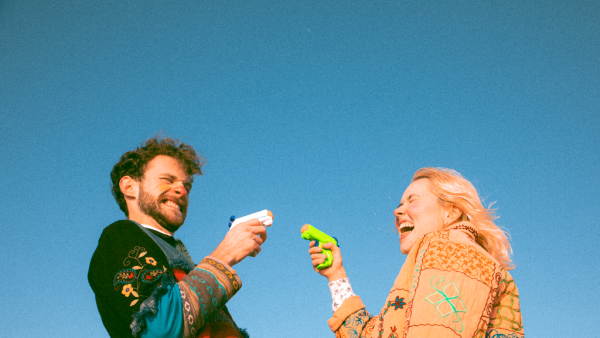 An improv show lives and dies off the performers’ abilities to play to the audience. It can be argued that all live performances are dependent on this, but it is especially true for improv where everything else is stripped away save for the audience and their reactions. This requires performers to seamlessly bounce from joke to joke, transform a bad joke into one that lands, and always keep the energy elevated — especially when an audience member is called up to the stage. It is a medium unique to theatre.

On top of being an improv show, Hair Funeral is also a musical. An improvised musical. Forget improvised comedy, these are improvised songs — that rhyme! Consistently! It’s hard enough to improvise on your feet in a split second, but to make up a song on the spot that flows and is funny? That’s impressive.

Islay McKechnie and Ciaran Volke play off each other wonderfully, portraying two friends with a failing bar (and the occasional minor character), while Rhi Smith provides backing music on the piano.  McKechnie and Volke are fantastic comedic partners who are quick to react to audience participation and new bits without cracking up too much, though some jokes do manage to push through. The friendship of McKechnie and Volke’s characters feels lived-in and it’s apparent how comfortable they are with each other.

Despite being an improv show, there is a plot hiding underneath the laughs. According to Volke, the world of the show was established by himself, McKechnie, and Smith. A few of these world-building details are set in stone, but the strings connecting them are left up to random chance depending on the night. The plot itself is a story about moving on and mourning the old self left behind.

I think this semi-improvised structure works for the story McKechnie, Volke, and Smith end up telling. It’s just varied enough to keep everyone on their toes with the random comedic moments that improv shines in, but structured enough with key themes to keep those moments focussed. Everything builds towards an end-point, and each scene contributes to the tone and concept being explored. Nothing spirals out of control, as can sometimes be the danger in improv. There is a story and an idea for the audience to enjoy, and it never feels like the structured and the improvised are clashing with one another.

Most of the show’s improv is dependent on who is pulled up onto the stage that night for a drink in the bar (and yes, they were served a real drink). McKechnie and Volke pry a few details out of the guests, which help establish some of the themes for the night. However, these moments depend on how open the chosen audience members are with both the performers and the audience as a whole.

On the night I went, one of the guests pulled on stage was more open than the other, but McKechnie and Volke never pushed beyond what each person was willing to share. And of course, only those comfortable to go up to the stage went up in the first place.

The comedy and drama of the show are in balance with each other. Neither clashes with the overall tone, as there’s a light, fantastical feel to the internal logic of this world. Fundamentally, it’s a place where anything can happen — like a chat with a bear or a walk all the way to Toronto and back. What’s serious and dramatic isn’t the world, but the emotions that McKechnie and Volke’s characters go through.

Hair Funeral is a story of exploring identity in a world that is random and oftentimes unfair for reasons beyond our control. It’s also a world that never takes itself too seriously — a world where the Mayor is named Mayor, and his son, Baby Mayor.