Half empty, half full 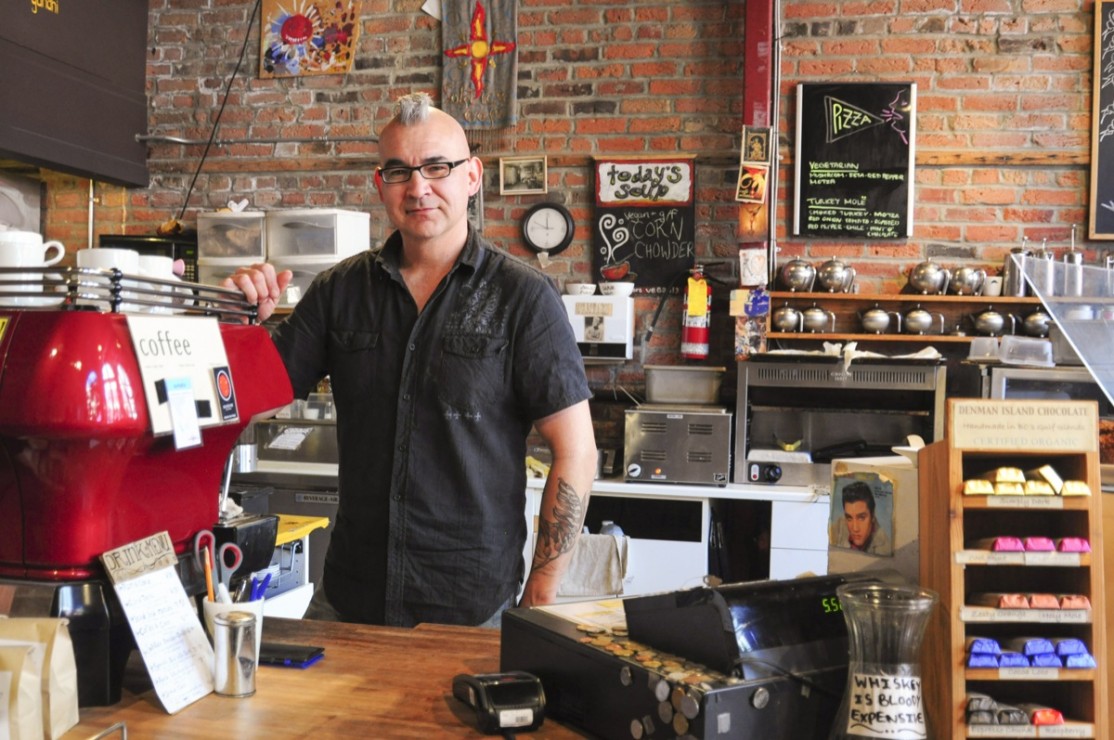 Some drink it for an energy boost, or maybe as an afternoon treat. Others take it on the go, or sit down to enjoy the cup of comfort. As for those who like a little something extra with their coffee, they head to Victoria’s independent cafés.

Victoria’s coffee culture has been growing steadily over the past decade, almost with the same gusto as the Island’s craft breweries. You can have your choice of caramel undertones, hints of cherry, or green grape acidity in your cup of joe. We can’t grow our own beans in Victoria, but the area’s independent coffee shops and roasters add a local flair to Canada’s second most popular beverage. While the options are forever expanding in the coffee business, challenges in the downtown area have one of Victoria’s most cherished independent cafés feeling the grind.

Since 2001, David Cardinal has made Solstice Café a second living room for locals, visitors, and performers alike. On any given day, you can find people working away on laptops, scribbling in notebooks, chatting with friends, and sipping on mugs of Solstice’s home-roasted coffee. It’s a loved location, but sometimes love isn’t enough to keep a business afloat. Last year was particularly rough for Solstice, with 2013 marking its worst year yet for coffee sales.

“It’s super challenging,” says Cardinal. “It’s hard to complain. I wasn’t the first coffee shop in town, so I can’t say other people are stealing my idea, but it’s really difficult when there isn’t the business in downtown Victoria to support the number of cafés there are.”

In a conversation with Douglas Magazine, Jim Walmsley of Union Pacific Coffee Company likened the coffee business to “a battleground of an oversaturated market.”

According to Ken Kelly, manager of the Downtown Victoria Business Association (DVBA), downtown coffee shops continue to appear because new entrepreneurs believe they can still one-up their competitors with a better location and a better brew.

With the independents and chains combined, there are over 50 coffee shops in the downtown core alone, with at least seven of those located within a two-block radius of Solstice’s home on Pandora Street. Despite the already-high number, more cafés keep popping up.

While the number of cafés offers a varied experience for consumers, it poses problems for café owners. “It cuts your share of the market each time,” says Cardinal. “For the new place, they might see success in the short term, because everyone wants to try the new place. We found a fair bit of growth in the beginning, but it’s really difficult to maintain that level of business. The competition level is a little extreme.”

Cardinal has seen a lot of waves in the industry, but not only from the increased competition. Between ongoing construction on Pandora Street and the emptying of a large office building on the block, Solstice’s convenience following has taken a hit.

“Office workers can have a huge impact,” says Cardinal. “They’re the type of people that may come twice a day, every day, five days a week. That loss was the largest negative impact on our business.”

So negative, in fact, that on January 2, Solstice issued a notice stating that they will be evaluating whether or not to give their six-months notice to the landlord come June.

While coffee isn’t the only product Solstice has to offer, the café’s success over the next few months will be calculated based on coffee sales. “Financially, that’s what makes the café work,” says Cardinal. “Food and baking are really small profit margins.”

Economics aside, that’s where the café began anyway: with Cardinal’s love of coffee. The business has grown to be much more, but coffee makes Solstice a passion project for Cardinal.

“My goal wasn’t necessarily to be a businessman,” he says. “I really wanted a café. It was the coffee focus that started my interest in a café, and has kept my interest in running a café.”

Cardinal went into the business with little knowledge about the coffee industry, but his goal was clear: to create a café based on ethical decisions. According to Cardinal, Solstice was the first café in Victoria that served only organic and fair trade coffee.

“I was in love with the café environment, but I always felt that places weren’t doing everything they could,” says Cardinal. “It was my belief that you could run a successful business and base your decisions ethically and environmentally as well.”

The process has been “learn as you go” for Cardinal, developing his skills along the way. Solstice originally got its soup from a supplier, but after being forced to switch suppliers on a few occasions, Cardinal said “I’m just going to make my own damn soup.” It was a hit.

“Over time, I built the need to produce and sell my own things,” he says. All of the food and baking is done in-store and, after working closely with Fernwood Coffee Company, Cardinal also began roasting his own coffee under the name of “Many Pink Feathers.”

The café’s ethical and environmental philosophy hasn’t changed over the years, but the vision has expanded. Whenever he could see a positive impact, Cardinal rose to the challenge. That impact spread beyond coffee as Solstice opened its doors to community events, starting with the Philosophy Café and continuing on to host spoken-word poetry and live music.

On Solstice’s significance, Kelly commented, “The services they provide to not only the downtown but our entire community by providing a stage for up and coming artists are very substantial.”

Ryan Paddack, a student at the University of Victoria and a poetry enthusiast, relays the same message.

“It lets a lot of little guys get up and do their thing, where previously they wouldn’t have a place to do that,” he says. “It gives people like me who are into poetry a place to go and experiment. The first time I performed was bad. It was pretty full. There were a lot of fun-looking people, but I got up there, and my whole body was shaking. I was terrified, but everyone there was really supportive. It had a really good feel to it, which made me more comfortable.”

Paddack says the same about the concerts. “When I see a show at Solstice, the venue is so small and I’m so close to everyone that I feel like I know them. It’s a lot more personal in that way. It connects a lot of people who wouldn’t have a way to connect otherwise.”

Having worked evenings at Solstice before moving to daytime shifts, Shanelle Demelo was, and remains, a part of that community.

“That’s what I really enjoy about the events,” says Demelo. “These aren’t just people coming in to perform something at the space. We all became friends, and we’re still involved with each other’s lives. We’ve had times where we’ve all just hung out on the back patio and talked about their music, or the piece of work they just shared, and not just sent them home and saying ‘Good to meet you, see you later.’”

With nearly three years of work under her belt at Solstice, Demelo attests that Solstice has more to offer than the average café.

“You can go anywhere and get great coffee,” she says. “There are so many other places that offer what we do product-wise, but if you come in here and get the chance to be a part of this place, you’ll realise Solstice is more than somewhere else.”

Among Solstice’s many merits, Demelo emphasizes a sense of community and humour, a loving atmosphere, and quality service.

“It’s really special,” she says. “The people who work here and the people who come in are magical. Everyone has a really good heart, and I wish more people would come in and be involved so they could see that. If you look beneath the fact that it is just a café, there’s a lot more to it.”

True to her statements, a dozen friendly faces walked through the door while I spoke with Demelo and Cardinal. They caught up with the employees behind the counter, and chatted with friends they bumped into by chance; it seemed more like a home environment than a public space.

“We’re a tight family,” says Cardinal. “The most important thing is the people it’s brought into my life, both those I work with directly and the people the café has affected. The closeness to our customers is probably deeper than most businesses would experience.”

No matter what the future brings, Cardinal is ready for whatever adventure comes next. Should Solstice take new ownership, he has provided an invaluable service to Victoria, far beyond a caffeine kick. He has built a community, and created a space for sharing. If you’re looking to get a little more out of your coffee, you know where to find it.