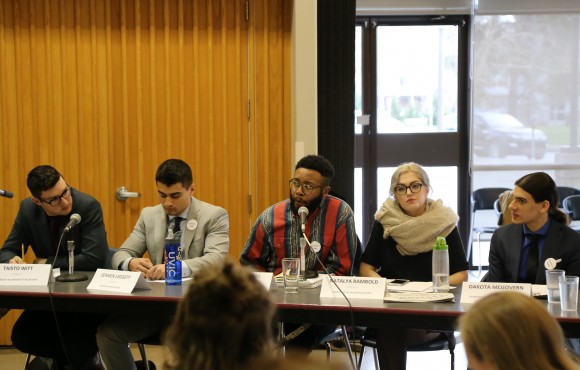 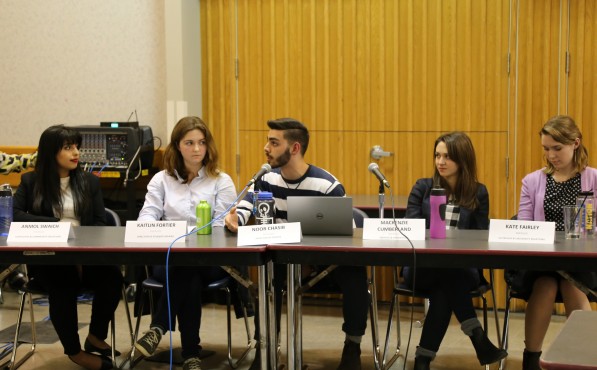 Although this year’s UVSS Elections Lead Directors’ Debate may be remembered by some for a few fiery moments of passion, it was largely characterized by similar answers from slates on a number of issues, with a smattering of screaming and an occasional avoidance of questions entirely for good measure.

With the voting period beginning Wednesday at 9 a.m., candidates for the lead director positions made a final push of support before students take to the polls to vote.

Support for the two slates, Connect UVic and Energize UVic, was split down the literal middle of the Michele Pujol Room, with both sides quick to cheer and call out in support or condemnation of the opposing slate’s answers (despite moderator’s guidelines prohibiting it).

For the majority of the debate, the slates didn’t find too many faults with the other’s policy suggestions. Both slates expressed willingness to collaborate with outside coalitions like the Alliance of B.C. Students and Canadian Federation of Students (CFS) in lobbying efforts, though Energize UVic did rule out working with the latter based on the organization’s continued legal troubles.

And both slates said there would be no support for the Bell Let’s Talk program next year over concerns about the corporatized nature of the fundraising campaign.

However, both slates demonstrated some lack of knowledge in UVSS history, particularly regarding last November’s National Day of Action, hosted in part by the Canadian Federation of Students, and the Undergraduates of Political Science conference controversy in November 2015, and the issues related to such. Both events were raised during question period as instances where the board made decisions that were hugely unpopular within the UVic community, and neither candidate was fully aware of what took place at the time.

But, both were clear in their support for UVic divesting from fossil fuels, and their condemnation of trans-exclusionary radical feminists harassing transgender students.

Of course, the most interesting parts of the debate came when the two slates diverged in their stances. Clear and deep lines were drawn in the sand surrounding issues of speakers on campus, Campus Security presence at events, and approaches to lobbying the university administration.

But before you go any further, you can listen to the debate in its entirety at cfuvpodcasts.com/u-in-the-ring/. You can also read our livetweet of the entire debate at twitter.com/TheMartlet.

The most intense moments of the debate arose around the difference between free speech and hate speech, with questions resulting in cheers and jeers from the gallery, several awkward silences, and a shouting match that ended in the threat of expulsion being levelled at a candidate.

The conflicts came in response to questions about a speaking event, taking place Wednesday, hosted by UVic Effective Altruism and involving bioethicist and philosopher Peter Singer. Many advocacy groups on campus have condemned the event primarily due to Singer’s controversial views on disabilities and euthanasia, and have pressured the UVSS to take action in halting the event.

Kaitlin Fortier, Energize’s candidate for director of student affairs, noted that there is a pronounced line between hate speech and free speech but argued that Singer did not cross that line. Fortier said that the best way to dispel a harmful belief was to argue it, rather than ban it. 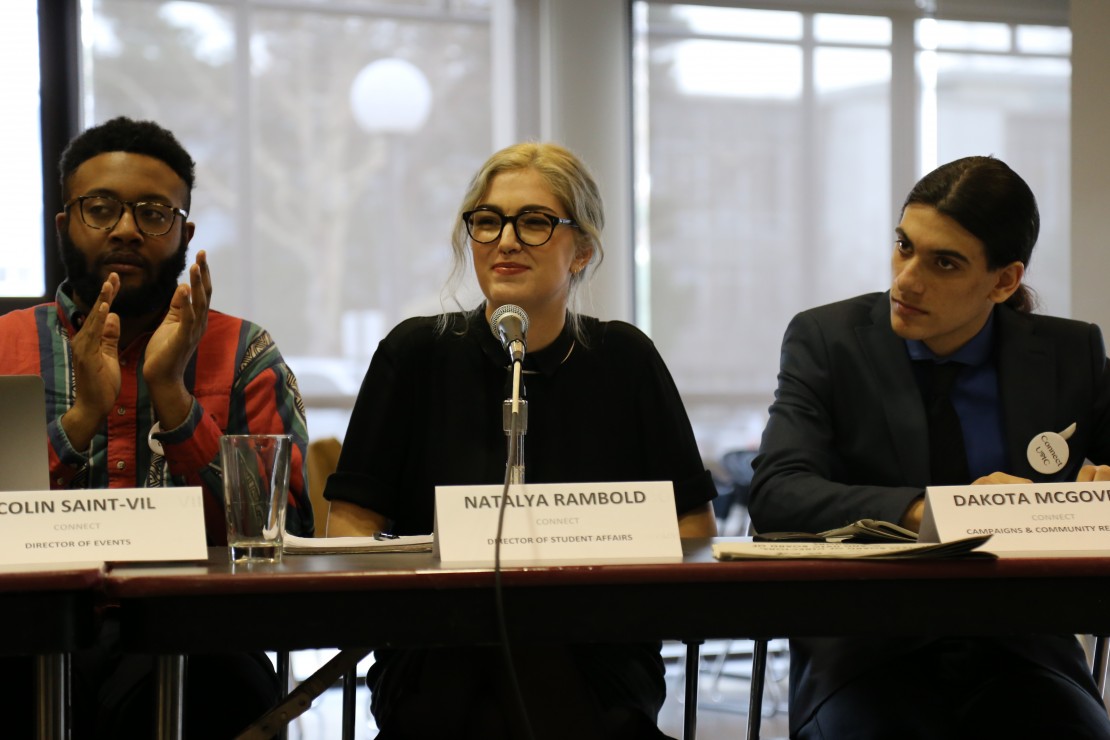 Natalya Rambold, Connect UVic candidate for director of student affairs, took time at the debate to criticize the UVSS and UVic for allowing an event featuring Peter Singer, a controversial philosopher and professor, to take place. Photo by Belle White, Photo Editor

Her opponent, Natalya Rambold of Connect, spoke out against what she called Singer’s “harmful and ableist rhetoric” and condemned Energize for defending the event and UVic for allowing the talk to go ahead.

But when Rambold’s 90 seconds were up, and both the moderators of the debate and the UVSS Elections Chief Electoral Officer Lori Roter asked her to stop speaking, Rambold refused. She continued to speak — despite her microphone being shut off  —  forcing Roter to walk over to Rambold and stand between her and the audience, shouting, “that’s it, you’re done!”

Rambold eventually finished her speech and the debate continued.

On Tuesday evening after the debate, Taisto Witt, Connect director of outreach candidate, released a statement on Facebook in which he said, “[Connect] supports . . . the voices of those who do not want this event on campus . . . Our position is, literally, directly supporting the rights of those who oppose this event to freely and openly voice their opposition.”

With rhetoric that echoed a lot of discussion from last year’s UVSS debate, both slates took a different stance on lobbying the university administration. With key campaign promises from both slates relying on coordination with UVic,  the opposing slates had varying stances on what that coordination would look like.

Noor Chasib, Energize candidate for director of events, spoke a lot to ending the animosity between the student’s society and the university administration. He argued that Energize’s asks were not unreasonable if they could successfully work with the university.

Dakota McGovern, Connect candidate for director of campaigns and community relations, made it clear they were happy to stand up to the administration if student’s needs demanded it. He argued that what was in the university’s best interest wasn’t always in the student’s’ best interest.

The differences were also made apparent in regards to the slate’s opinions on campus security (CSEC). Spurred by questions regarding CSEC presence at UVSS events, opinions divided both the candidates and the audience.

Colin Saint-Vil, Connect’s candidate for director of events, said he would rather have students looking out for students at events, with peer intervention training. Saint-Vil also talked about his “distrust” of CSEC and other officers in positions of power as a student of colour.

Chasib argued that it would be wasteful to not utilize campus security when able, mentioning that despite his status as an immigrant and a student of colour, he had never had a bad experience with them.

When asked about her lack of support for a referendum asking if students favour adjusting the student society’s fees annually to match Canada’s inflation target, MacKenzie Cumberland, Energize candidate for director of finance and operations, reiterated previous statements where she said students today shouldn’t be voting on fee increases affecting future students at UVic. She elaborated that the board should work with advocacy groups to see what they need to support their operations.

Cumberland didn’t, however, answer a follow-up question from moderators asking how she would propose that constituency organizations such as the Martlet or CFUV offset the effects of inflation when they do not have access to the alternative revenue streams outlined in Cumberland’s platform — namely, diversifying and expanding SUB businesses.

Cumberland did express support for the second referendum asking for a vote on the Food Bank levy, saying students should instead vote on referendums that increase what percentage of fees go to advocacy groups. This ignored the fact that the student fee referendum would, ideally, eliminate the need for continued and repeated requests for more money — like the current Food Bank referendum.

In response, Zennen Leggett, Connect candidate for the position, reiterated his own support for the referendum.

What does the future hold?

Whether anybody’s minds were changed by the debate is for anybody to guess. We may only know when the results begin to roll in. Whichever way the penny drops, both slates had their chance to speak their views; it’s up to students to decide whose views they like best.

Voting for the UVSS, Senate, Board of Governors, and GSS begins at 9 a.m. Wednesday morning at webvote.uvic.ca, and has been extended to 10:15 a.m. on Friday morning, March 3, to accommodate the missed time due to a system glitch that occurred at the start of the voting period. (Senate, BoG, and GSS polls close at 4:30 p.m.)