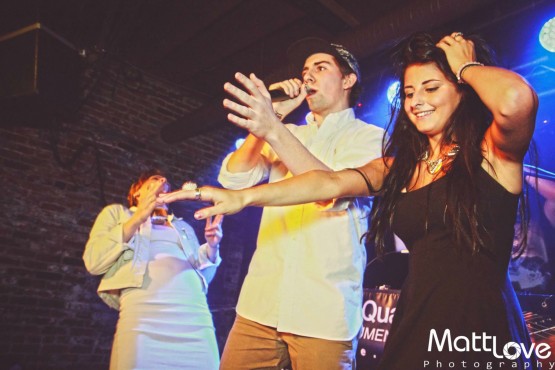 The room is dim, loud and packed. Bartenders work in a blurred frenzy. Some people sit. Others stand. Most dance. Onstage, two skinny white dudes in V-necks and Birkenstocks give an aggressive, wild-eyed rendition of the song “Blockbuster Night Part 1” by the formidable hip-hop duo Run the Jewels. Behind them, Liam Low, aka DJ Low, spins the track while host/hype-man Shane Battley jumps around. Some crowd members holler lyrics. Others flail in a drunken, rhythmic reverie. Everyone is here for one reason: Hip Hop Karaoke (HHK) at Lucky Bar.

On the first Thursday of every month, hip-hop heads assemble for this event. But it’s not your run-of-the-mill karaoke night. The stakes are higher, and the audience is more invested. To participate, you must sign up in advance of the night by giving your name as well as the song you (and a friend, if you want) will perform. Onstage, you’re expected to perform it from memory, with no vocal backing track to help if you screw up.

“If you have words on a screen, like traditional karaoke . . . people just stand there and read the words,” says Low, the co-founder of HHK Victoria. “At [HHK], you get more people coming out of their shell and actually putting a performance in.”

“I wanted a place where I could DJ and play hip-hop music in Victoria, because there wasn’t much of a scene going on,” says Low. So, he teamed up with host Battley to make it happen. Hip-Hop Karaoke has become a growing phenomenon in other cities as well; Low cites Calgary, Ottawa, Vancouver, Toronto, New York, and London. 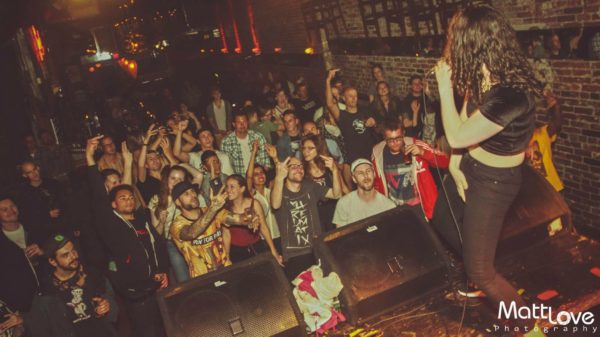 Low knows Battley from an event called The Show, where Low would recruit a Canadian rap act every week. At the beginning of The Show, during an open-mic portion, Battley often rapped with his friends. Low knew Battley was trying to start an HHK-esque event under a different name, and Low suggested they collaborate and officially call it Hip Hop Karaoke.

Victoria’s first HHK night took place in July of 2014. “We just threw it out there to see if there was even an interest,” says Low. The first few months had sketchy attendance, but in November 2014, Low and Battley upped the ante. “We hired a really good [poster] designer, [Carlin Bennett] . . . We hired Matt Love as our photographer, we got the sponsors [Wolfsheep Arthouse, Complex Clothing, Status Barbershop, The Foxy Box, Bows & Arrows Coffee Roasters] on board,” says Low. “That was a chance to spread the word.” Since then, HHK has been a consistent hit.

[pullquote]Someone can get up there and bomb, and nobody’s gonna be hating on them.
If anything . . . [you] get a lot of cheers for even getting up there and trying.[/pullquote]

And though HHK may seem intimidating, Battley and Low keep it relaxed and fun. They’ll encourage you if you screw up, and they’ll laud you if you kill it. “Someone can get up there and bomb, and nobody’s gonna be hating on them,” says Low. “If anything . . . [you] get a lot of cheers for even getting up there and trying.”

Diversity defines HHK. Whether you’re black or white, performing Biggie or Riff-Raff, you and your performance are met with enthusiasm. “It doesn’t matter what song you pick or where you’re coming from,” says former UVic student Gabe Lunn. “Everyone is there to support your set and get ready for [theirs]. It’s this whole kind of performance collective.” And though Victoria and hip hop may appear demographically incongruent, the genre’s popularity here is undeniable. “It’s not like you could be this skinny white person there in corduroy jeans and a collared shirt and act like you haven’t heard Wu-Tang’s [Enter the Wu-Tang (36 Chambers)],” says Lunn. “We act like we’re not part of that community, but, believe me; we have all heard those songs.”

Often, the demographical dichotomy serves the show. “One performance . . . sticks out in my mind,” says Low. “This girl came out, and she was kinda shy. Small little white girl. She got onstage — and I don’t think she’d ever been onstage with a mic before — and did Blackalicious’s ‘Alphabet Aerobics.’ And [she] just killed it. A through Z. Just murdered it.” 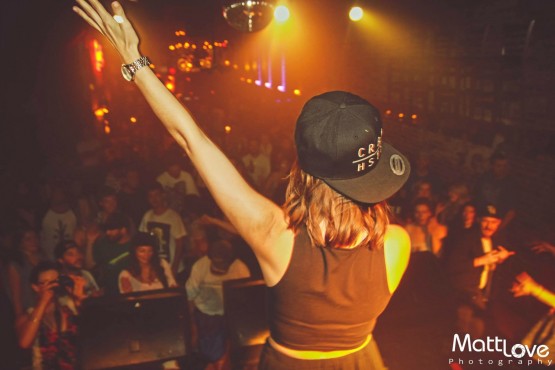 HHK had a brush with fame when it was part of last year’s Rifflandia Festival. Someone emailed Low saying that they’d like to do a song. “[I] figured it [was] just another person signing up,” says Low. “He came up and introduced himself, and [was] like, ‘yeah, I’m from Queens, New York. About twelve years ago me and some friends decided to start this thing in New York called HiP Hop Karaoke.’ And it actually turned out to be the guy that started the whole thing.” But Zach Quillen is more than HHK’s originator. He’s also the manager for mega-selling hip-hop duo Macklemore & Ryan Lewis. “It was a cool milestone for us to have that guy come through,” says Low.

Low and Battley plan to expand HHK; ideas include an R&B karaoke night, as well as incorporating professional live acts. Undeniably, though, HHK at Lucky keeps improving. “Every month I’m like, ‘maybe this will be a quieter month,’” says Low. “But every month it’s busier or more fun.”

The next Hip Hop Karaoke, featuring R&B, is on Feb. 4 at Lucky Bar, 517 Yates St. Participants can sign up in advance by emailing hhkvictoria@gmail.com.