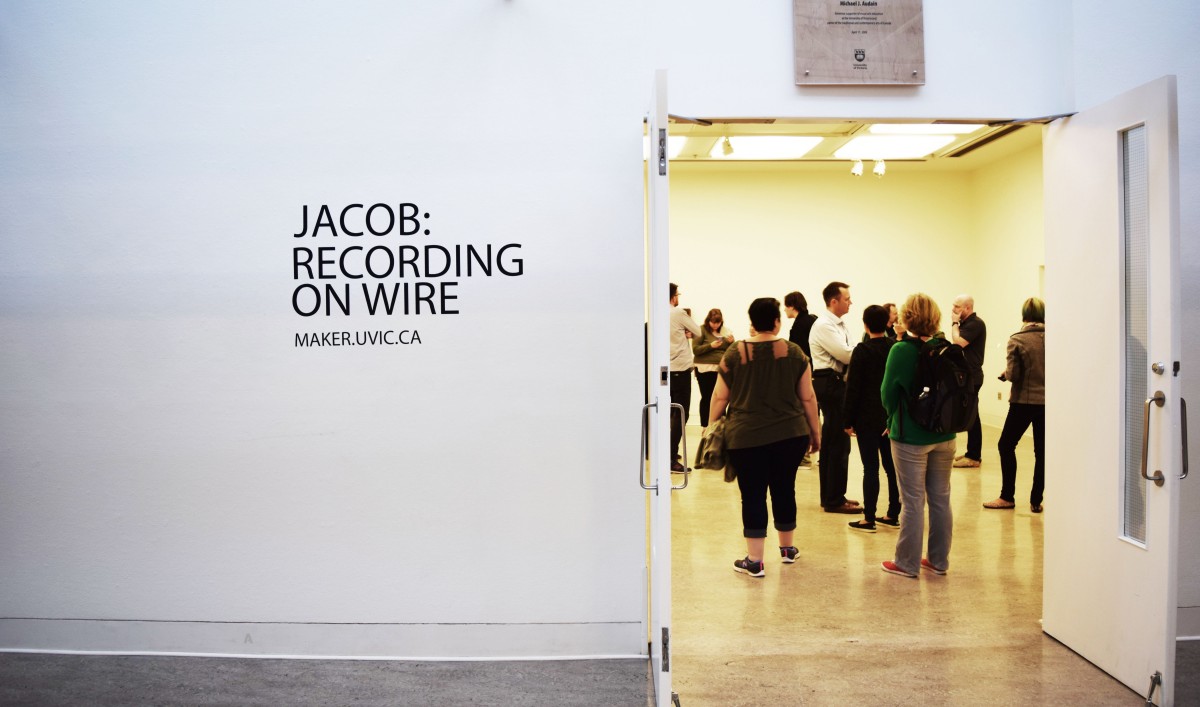 A wire that can record sound and play it back. An electric pin powered by a battery. A machine that turns text to audible tones.

These may sound like modern and complicated pieces of technology, but in reality that’s only half true. Each of the three devices were first developed around or before the turn of the 20th century, with each device — and many more — painstakingly studied and reproduced by UVic’s very own Maker Lab — supported by the Departments of English and Visual Arts. And the first of those devices was given particular attention last week as part of a collaborative project.

From June 14–17, the Maker Lab (or MLab) and UVic Audain Gallery presented Jacob: Recording on Wire, an exhibit displaying the successful replication of a 19th-century experiment conducted by Danish inventor Valdemar Poulsen. In the original 1898 experiment, Poulsen recorded sound to a thin metal wire and played it back using a magnet and the very same wire.

The exhibit was headed by Katherine Goertz, Danielle Morgan, Victoria Murawski, and Jentery Sayers, with contributions from Teddie Brock and Tiffany Chan, and is the latest successful project to come out of MLab, perfectly matching their mandate of understanding both the old and new repercussions of technology.

“We remake [old technologies] that no longer exist, or no longer function [such as] early wearables [Ed. wearable technology], [and] early magnetic recording experiments,” says Jentery Sayers, an assistant professor in English at UVic and the director of MLab. “These are things that are in museums, or that no longer work as they once did. We are interested in how they once functioned and rehabilitating them.”

Sayers first learned about Poulsen’s experiment through stick-man drawings and abstract accounts in a book he was researching for his dissertation on the history of magnetic recording. Sayers told Morgan and Goertz about it, and the two students have been working on the project for six months now.

Poulsen’s experiment is considered to be the first successful magnetic wire recording in human history, and kickstarted use of the technology worldwide until the 1940s before it was replaced by magnetic tapes.

The exhibit saw Morgan and Goertz attach a transmitter — adapted from a telephone mouthpiece — to a metal wire strung across the room. Speaking into the mouthpiece, the MLab researchers were able to record the name ‘Jacob’ onto the wire. Iron filaments — representing sound waveforms — clung to the now-magnetized portion of the wire, providing a visualization of the recording. 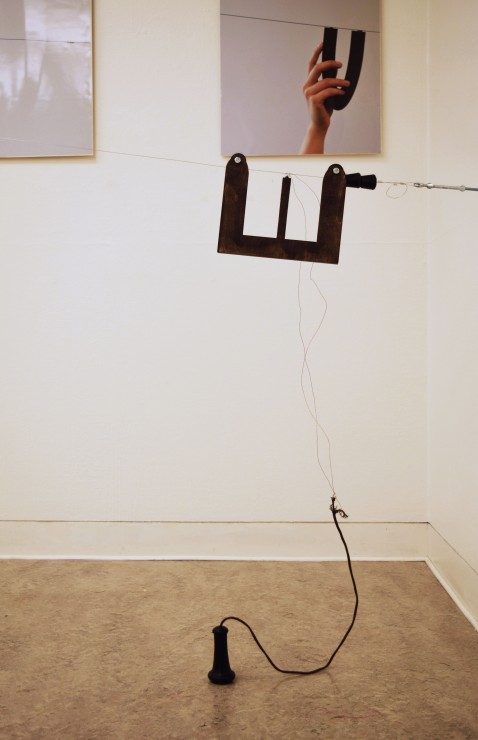 Maker Lab researchers record the name ‘Jacob’ onto a wire by speaking into this mouthpiece. Photo by Danielle Morgan 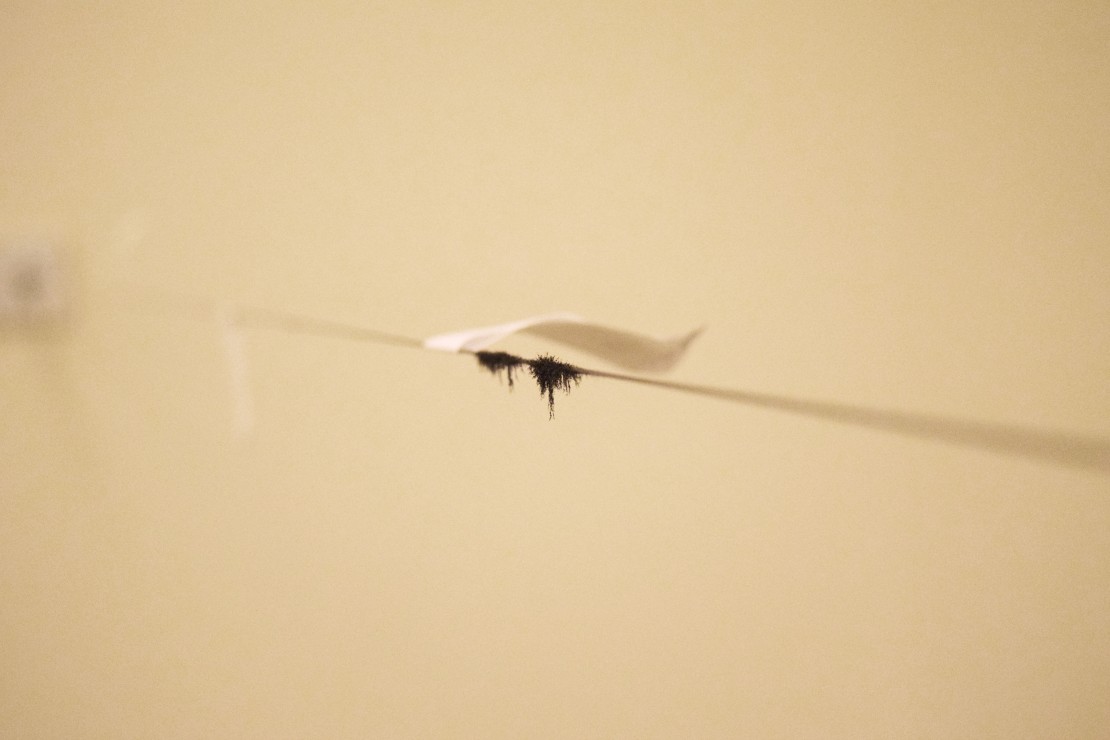 Iron filaments cling to a magnetized portion of the wire. Photo by Danielle Morgan

For Morgan, a recent graduate of English at UVic, the experiment proved the perfect opportunity to question and scrutinize a piece of important technological history.

“I’m really interested in taking the historical particulars [of technology] and then doing something with them,” says Morgan. “Not taking history for granted or at face value, and instead thinking about ‘what if it didn’t work like that’ or ‘what if it worked like this’.”

“I like to relate it back [to modern day],” she says. “So there’s the early wearable pin that we made — that relates to wearable technology like Google Glass. We made an optophone, which is a reading aid for the blind that would convert text to sounds. That would relate back to what we’re using now as braille and reading aids. And now [the Jacob experiment], which relates to storage.”

While the science of the experiment can be confusing — and it certainly was for this reporter — Sayers believes it can lead to a better understanding of modern technologies like data storage and computing.

“What you have here is the predecessor of the hard drive and cloud computing,” says Sayers, “and that history is steeped in sound. I think early histories of sound deeply inform present day computing.”

It’s a theme found throughout all of MLab’s work — using now extinct or defunct pieces of technology to further understand a society that is creating new technologies faster than ever before.

“I think [old technology] is very confusing to most people,” says Morgan. “I think that when you look at it you think, ‘how does this relate to what we’re doing now?’”

For Morgan, this is what is so interesting and satisfying about working at MLab.

And with no shortage of new and old technologies to examine and experiment with, there’s bound to be more future projects for her and the rest of the researchers at MLab to tackle.

Says Morgan: “[We’re] just understanding how we got here.”

Corrections—June 22: A previous version of this article stated that the exhibit was headed by Katherine Goertz and Danielle Morgan, but failed to mention the involvement of Victoria Murawski and Jentery Sayers with contributions from Teddie Brock and Tiffany Chan. The article also referred to a Digital Humanities program; UVic has no program per se, but does offer Digital Humanities classes. The Maker Lab itself works across the departments of English and Visual Arts.

We also made some slight corrections regarding the technical language describing the experiment and the Maker Lab’s work around the project. We apologize for the errors.