Hold onto your buckled hats: The frightening, modern relevance of ‘The Crucible’ 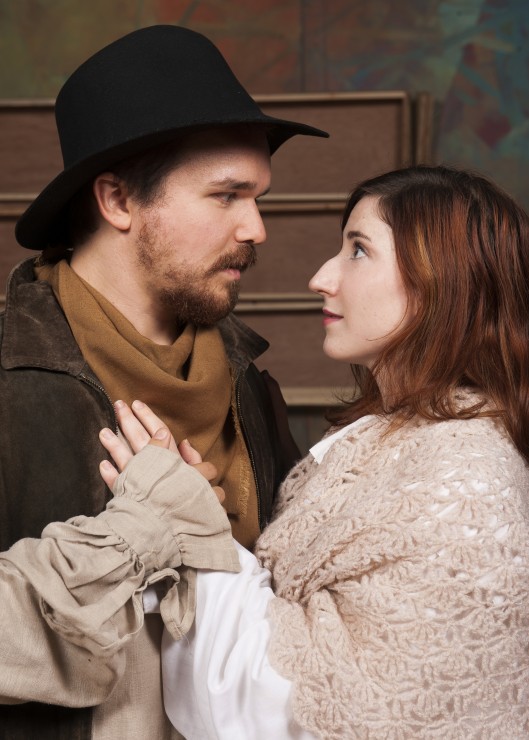 John Proctor (Alex Judd) and Abigail Williams (Sarah Newton) are two of the many players embroiled in a drama involving witchcraft in The Crucible. Photo by David Lowes/Langham Court Theatre

I’ve always been glad to avoid confrontations with my neighbours, especially after seeing an evening performance of The Crucible at the Langham Court Theatre. The play, written by Arthur Miller and directed by David MacPherson, is a classic that is still eerily relevant to today’s society.

The play is set in colonial Salem, Mass., during the late 17th century. The opening scene thrusts the audience into the crime of the moment: young girls daring to dance in the woods unsupervised, obviously up to no good. The play quickly takes us from that shocking moment of wild abandon and into the main story to introduce a large cast of characters, many familiar from history books. There is the instantly disagreeable Reverend Parris (Bill Allan) who “saved” his young daughter Betty (Abby Baker) from the wild dancing, and now lies sick with a possible supernatural illness.

This mysterious illness of Betty’s causes a nervous stir in the town, especially with the panicked Thomas and Ann Putnam (Carl Powell and Bryony Blake) and the group of girls who were dancing with Betty on that ill-fated night. The group’s ringleader, Abigail Williams (Sarah Newton), denies the accusations of witchcraft, but a spark has ignited among the jumpy townspeople.

Brought in to remedy the situation is the righteous Reverend Hale (Michael Bell) and eventually other authorities including Deputy-Governor Danforth (Kenneth Yvorchuk) and Judge Hawthorne (Jordan Bell). Townsfolk who stay away from the pitchforks and radical accusations include John Proctor (Alex Judd), his wife Elizabeth (Elena Kellis), and their servant, Mary Warren (Shea O’Connor). It’s not long, however, before even the sensible Proctor household is forced into the heated situation. The play follows these characters and many others as they navigate an escalating political and religious agenda, pushed forward by radicalism, vengeance, and petty greed. 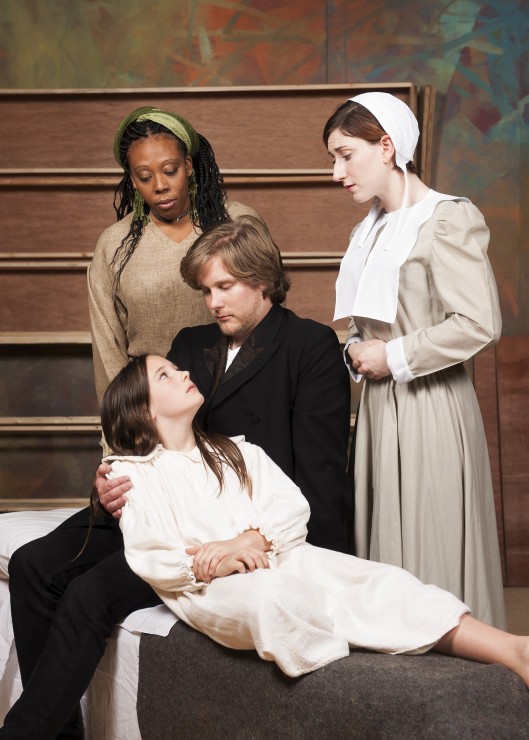 The play worked well as an ensemble drama, although some of the blocking movements could have been smoother. Strong performances included Tenyjah Indra McKenna as Tituba, whose story added an emotional layer to the historical landscape playing out before our eyes. Michael Bell as Reverend Hale brought the stage to life with a clear voice and enough hellfire rhetoric to make even a Puritan content. Newton’s Abigail Williams also stood out as a strong actor, playing just the right amount of charm and hidden menace.

With so many characters crowding the stage, the pressure to be heard was apparent and, unfortunately, not met by all the actors. One scene that gripped the audience’s full attention was in the courtroom. The tension and suspense in this scene was palpable, with strong performances by O’Connor, Newton, and Judd. The revolving set was also a highlight of the play, with the dark shadows of trees contrasted to the bare interior of other settings.

Although The Crucible premiered in 1953, it still has many things to teach us. Chiefly, don’t let your father stumble on you and your friends in the woods, because who knows? That could very easily set in motion numerous public executions fuelled by neighborly distrust and mass hysteria. But in all seriousness, themes from The Crucible do feel just as relevant today as they did in the past. The repercussions of religious extremism are realities we are all too familiar with. Self-advancement over good sense is also something we might recognize in 2016, and as John Proctor and many other characters learned, sometimes good sense doesn’t triumph over injustice.

I would recommend the play, although do keep in mind that there are an abundance of characters to keep track of and almost three hours of plot-building to sit through.

The Crucible runs at Langham Court Theatre until Dec. 3. Tickets are available at langhamtheatre.ca.