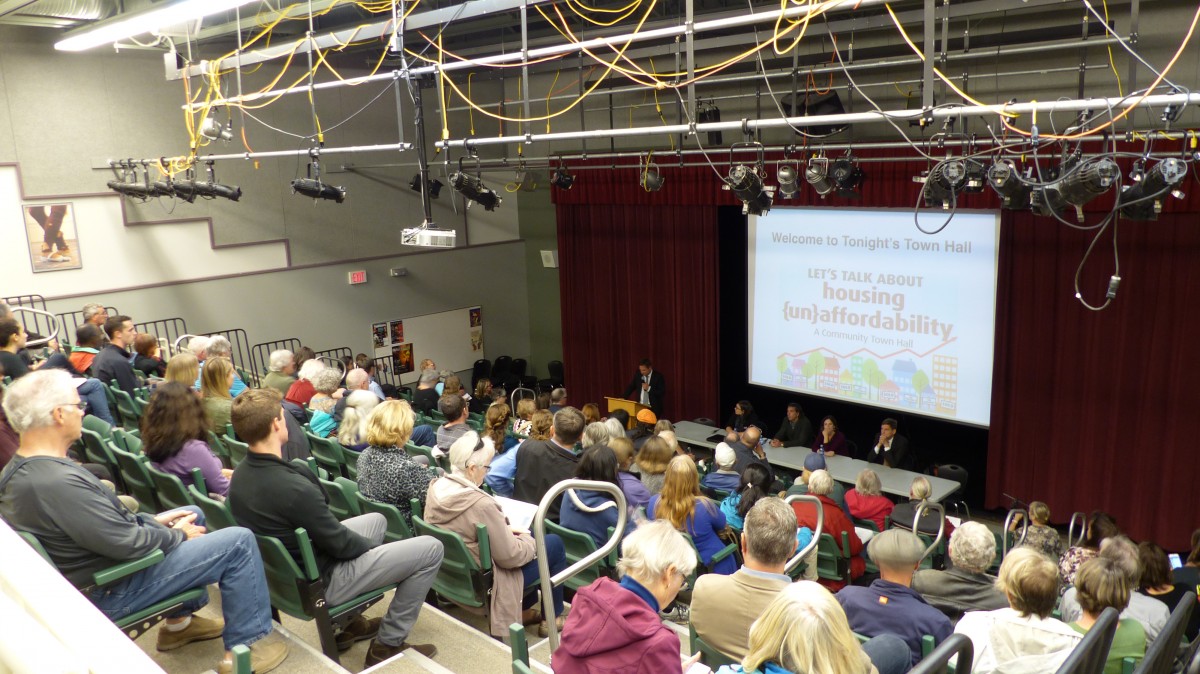 A full house of attendees came out for a discussion of the current B.C. housing crisis. Photo by Colin Grainger, Contributing Writer

On Oct. 11, New Democrat MLAs of the South Island and other panelists garnered some feedback on the housing crisis in B.C. at a local town hall meeting. Troubling statistics, stories of renovictions, and some possible solutions were examined at the public meeting for a mostly older crowd of 150 attendees at Reynolds Secondary School.

Marika Albert, Executive Director of the Community Social Planning Council of Greater Victoria, presented an array of statistics outlining the state of the crisis. “There are approximately 48 000 households in the capital region that are spending more than 30 per cent of their annual income on housing,” she said, citing the 2011 National Household Survey. “That exceeds the number of households in Saanich.”

“But here’s the kicker . . . half of all of our rental households in the region are spending more than 30 per cent compared to a quarter of owner households.”

David Eby, New Democrat Spokesperson for B.C. Housing, said there are multiple options for addressing housing: “First of all we need to massively increase our rental housing supply, and the easiest and fastest way to do that is to have universities that are ready to build . . . do that as soon as possible. The second is we need rental-only zoning . . . And third, we need a Residential Tenancy Branch that actually can enforce the rules that are out there.”

Some universities, including UVic, are ready to build new housing, but are prevented from doing so because the B.C. government will not approve the debt. “The government’s fear is if they take on additional debt through universities building residences, that would affect the credit rating of the province,” Eby said.

Jake Fry, founder of Smallworks Studios and Laneways Inc., a Vancouver construction services company, offered some ideas for how cities can create denser housing and avoid sprawl. Examples included multiple townhouses on a single lot; the concept of “pocket neighbourhoods,” where small houses are contained within a single block centred around common green space; and converting heritage homes into multiple units. He also discussed policy ideas such as government regulated fixed-cost housing.

Eby also told decade-old stories of Vancouver landlords allowing their buildings to be condemned so the city would evict their tenants, and large investment firms eyeing Vancouver for condos. Electricity usage data at the time suggested 10 per cent of the condos were vacant, hinting they were being used for investment, not for living. These problems, he says, inspired him to get into politics.

“My [data] in 2008 said ‘we can fix this housing crisis together . . . ’ and here we are in 2016. What a difference we would have today if the province and the federal government had recognized and intervened in the crisis at that time,” Eby says.