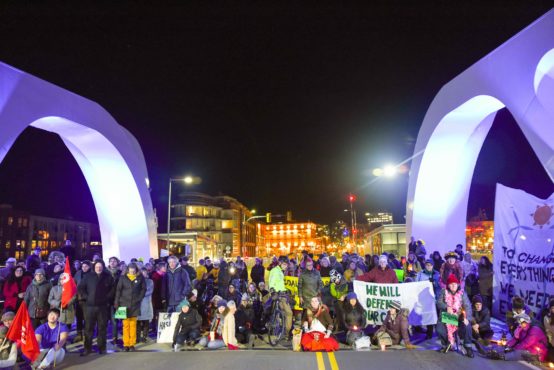 Around 250 people gathered in the middle of Johnson Street Bridge, Victoria, on Monday night to hold a candle-lit vigil for a livable climate.

Traffic was disrupted for about two hours — 12 minutes of which were spent in complete silence to represent the 12 years we have left, according to the recent IPCC climate report, to avert catastrophic climate change.

As the protest petered out around 8 p.m., six individuals refused to leave the bridge and were arrested and charged for failure to use the sidewalk.

The bridge vigil coincided with the opening of the COP24 gathering in Katowice, Poland, where tens of thousands of leaders and experts from across the world are meeting for the world’s largest annual forum on climate change. The vigil was organized by two Victoria-based grassroots organizing groups that go by the names ‘Rise and Resist!’ and ‘Extinction Rebellion Vancouver Island.’

The vigil’s primary purpose was to send the message to government leaders that they need to walk the talk when it comes to addressing climate change, but also to demonstrate that civil society is ready to take matters into their own hands.

“As the world’s nations gather once again to talk about what they’re going to do to address the climate crisis, we as citizens of the world are rising up to tell them that we are not waiting for them,” said Bobby Arbess, one of the rally’s lead organizers, to the crowd of candle holders.

“[Our Canadian government] goes off to these international conventions, makes themselves look like a climate leader, and comes home and approves nothing but gas and oil and coal expansion.”

“It’s time for us to wake up and take that action,” said Rose Henry of the Tla’amin First Nation, as she gave opening remarks at the vigil.

Victoria resident Paige Harwood was one of the six arrested for civil disobedience on the bridge after the majority of protesters returned to the comfort of their homes post-vigil.

According to the Merriam-Webster dictionary, one definition of a vigil is “the act of keeping awake at times when sleep is customary.”

This isn’t just a movement for the usual crowd of activists, but a movement that involves everyone waking up, Henry said.

“To change everything, we need everybody, young and old. We need everybody. We need the people to stand united, because when we’re united we will never be defeated,” she said. “Time is running out. We have no more time.”

Arbess noted how little time it has taken for us to reach this point of urgency.

“In a mere blip of time, in the name of progress, in the name of civilization … our planet [has been brought] to the brink of ecological and climate ruin,” he said, and pointed to what he called a colonial-capitalist system as the primary cause.

UVic geography student Ziggy Sveinsson, also in attendance, agreed with Arbess on the world’s structural issues, and said that we cannot always take individual responsibility for the climate crisis.

“It can seem kind of hypocritical to be stopping cars and making them idle, but in reality the majority of all the emissions and pollution [are] coming from industry and [they are] coming from those contracts that the government is signing,” he said.

“I really appreciate and really believe that everyone has small steps that they can make but it needs more than that, and it needs us to actively take on actions of civil disobedience to really force our governments to do something.”

Victoria resident Paige Harwood was one of the six arrested for civil disobedience on the bridge after the majority of protesters returned to the comfort of their homes post-vigil.

She said she hadn’t planned on sticking around to risk arrest, but over the 12 minutes of silence she began to realize just how short of a time 12 years to act really is.

“What is more terrifying? Having a criminal record … or telling your children, ‘Sorry we killed the orcas,’ or ‘Sorry you have to wear this mask because the air is so heavily polluted.’”

“I could either just be comfortable in my own privilege, or I could step up,” she said after she had been released from custody. “This is an uncomfortable situation so we can’t cling to comfort, or stay in a place of denial because there’s no time. There’s 12 years. That’s no time at all.”

“When I was 13 I was diagnosed with cancer as a result of environmental negligence and the petrochemical industry. What’s her life going to be like when she’s 13?”

Harwood grew up in Sarnia, Ontario, a city that hosts over 60 oil refineries and chemical plants, making up 40 per cent of Canada’s petrochemical industry. Women between the ages of 25 and 44 living in Sarnia are twice as likely to get leukemia than in the rest of Ontario.

After surviving cancer, Harwood said getting arrested is nothing compared to what’s at stake.

“What is more terrifying? Having a criminal record … or telling your children, ‘Sorry we killed the orcas,’ or ‘Sorry you have to wear this mask because the air is so heavily polluted’ or ‘Sorry … we can’t grow food because the weather’s so messed up from climate change and the soil’s so polluted’?” she said.

Arbess said the vigil was just the beginning of the movement to end the era of fossil fuel dependence in Victoria and beyond.

“This is the first local action in a graduated escalation of non-violent, people-powered, direct action that will continue until dramatic climate action is taken by the world’s governments,” he said.

On Dec. 6, three days later, Rise and Resist! members snuck banners into the British Columbia Parliament Buildings and hung them from the circular banister in the rotunda. The banners read, “LNG = CLIMATE CRIME” and “IPCC STILL = NO LNG.”

The activists and their banners were removed from the building in less than two minutes by security.