I watched The Interview 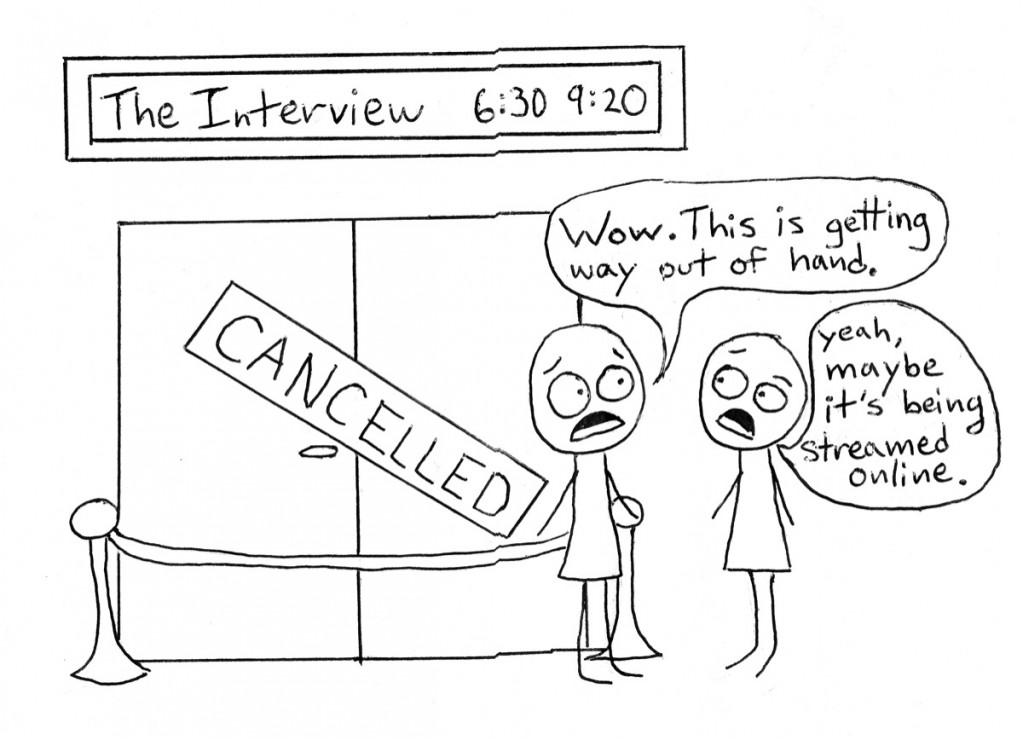 Paranoia seems to be abuzz with all the recent news around Sony and iCloud hacks. People don’t know who, when, how, or if they are being watched. Personally, I know it doesn’t help that I’m halfway through George Orwell’s 1984 right now. I mean, who am I to know if North Korea actually “hacked” or threatened the release of The Interview? Maybe it was another country, or maybe it was a different group of non-affiliated hackers that spooked this film’s release. One thing I know for certain is The Interview managed to score a lot of free advertising, and it may have just helped keep North America a little more housebound (but maybe not for the reasons you think).
What’s interesting is that this film has been grossing more in online sales than it has in theaters. Grossing. Not illegal downloads. This means the people who are opposed or oblivious to illegal downloading (of which I am of course totally a part of, ‘cause crime is bad) are staying indoors and they are finding means to view this film. And what’s more, the online downloads of this movie are high enough that Sony named it the “#1 online film of all time.” It may not be be breaking box office records, but this title could be quite significant.
Did watching it online stem from more than just fear of getting Kim Jong-un personally mad at you (even though going online—the place they supposedly “hacked”—is much more conspicuous than shuffling quietly into a movie theater)? It seems to me that out of the delinquent curiosity that feeds the Internet, or perhaps simply out of fear, thousands of people took another step in the direction of online entertainment. Over two-million people legally watched The Interview online and now have realized how easy it is to do so. In this age of Netflix, Crave, Crackle, Shomi, and Movie Central on Demand, our couch-indent is getting deeper; with threats of terrorist attacks against theatres that screen the film, our argument against leaving home is thickening. This is a blockbuster movie that just tested the waters at $15-million. Not a huge number in blockbuster terms, but it hasn’t been a month yet. It has effectively set a bar for low-budget, blockbuster pictures. It has shown production companies where and how to simultaneously release a movie online, allowing the more timid and comfortable to remain in their homes and not miss out on the action. Superbad only had a budget of $20 million. Neighbors’s budget was $18 million. Looking strictly at the line of Seth Rogen movies, this is a doable level to shoot for.
My question now is, by streaming this movie online did we let the terrorists win? Or is the act of viewing it a shout of personal freedom? I think a theatre is the best way to watch a movie. Seth Rogen said, “I’m so grateful that [The Interview] found its way into theatres, and I’m thrilled that people actually went out and saw it . . . the fact that people actually left their houses when they had the option of staying home is amazing.”
No matter how The Interview was viewed, sadly, most people thought the only noteworthy aspect was the situation that surrounded it. As a Seth Rogen fan, I am a little biased, but I still enjoyed it. I mean, it still had the same jokes that I enjoy. I was pleased by the satire on American culture, and Randall Park was pretty hilarious too. With that being said, it still falls below Superbad, Pineapple Express, and a few others. James Franco was a bit over the top (even though I think that was the point).
This year, we might start seeing a big shift in how we view movies, and one day we might be able to trace it back to The Interview (I feel like there is a This is the End joke in here somewhere, but I . . . I . . . I’m too tired).