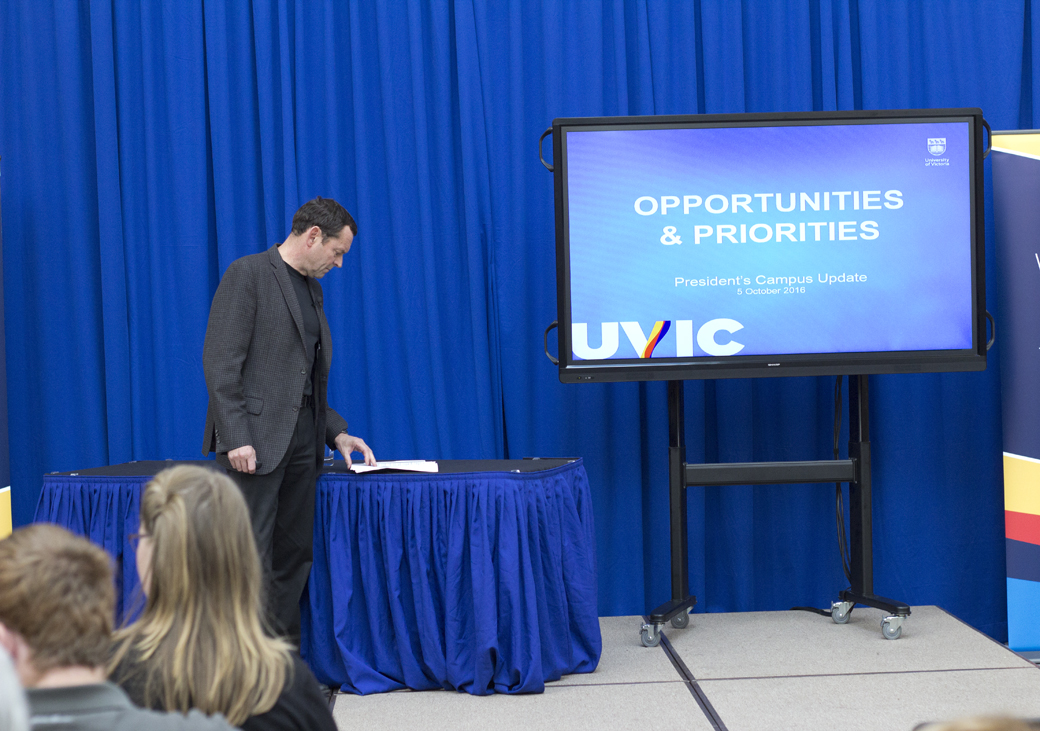 Indigenous issues, UVic’s international reputation, and the word “granular” all featured prominently in the Continuing Studies building on Wednesday, Oct. 5, as President Jamie Cassels spoke on a variety of topics relevant to UVic at the most recent Campus Update.

Speaking to a crowd of about 250 members of the faculty and administration, Cassels gave updates on a variety of ongoing initiatives at UVic, as well as answered a number of questions from those assembled.

Cassels was explicit in his desire to stay general and avoid the particulars. (It’s one of the reasons he said “granular” approximately twice a minute.) In doing so, he managed to touch on a large number of topics of interest to the UVic community.

The future played a key part of Cassels’ update, as he chose to focus on initiatives coming down the pipeline for UVic rather than spend time on newly completed projects. He spoke of the importance of reconciliation with UVic’s Indigenous community, the potential opportunities for the university in bettering their global reputation, and the importance of experiential learning for all students at UVic.

In a chipper mood, cracking jokes left right and centre, Cassels stressed the need for understanding the changing responsibilities that universities faced in the wake of globalization.

With there being a greater number of  universities and university students across the world than ever before, their role is changing from acting as elite academic institutions to public services. In response to these changes, Cassels noted the importance of allowing universities to run autonomously and consider the “long game,” but acknowledged that universities had to be “accountable, and not defensive” when it comes to “honouring their social contract”.

As part of that social contract, Cassels emphasized the “great” relationship between the university and its Indigenous community, and spoke at length about university initiatives aimed at reconciliation and decolonization.

“What decolonization and reconciliation means is we have an opportunity to remake our country,” he said. “We are not reconciled . . . we don’t know how to live together yet . . . which makes for a terrifically exciting proposition.”

Cassels noted his “personal excitement” around Indigenous issues, and proudly detailed a new double major degree in the Faculty of Law which would allow students to graduate with a degree in Anglo-Canadian common law as well as Indigenous law.

Finally, Cassels spoke to the effort UVic was making to raise their global reputation to keep with the quality he considered the university to have. He spoke briefly of the role advertising played in that, but focused mainly on what the UVic community could do closer to home to benefit the university around the globe.

“It’s not all about advertising — it’s a small thing — it’s about what we all do together,” Cassels said. “How we work, what we deliver, [and] the attitudes we have.”

After touching on a few various smaller projects — seismic upgrading, a plan to build a 600-person residence building, and the potential of a new addition to the Engineering/Computer Science building — Cassels opened the floor to those gathered for a question and answer period.

Two audience members — one a teacher and the other a student — called Cassels out on the university’s decision to discontinue its After School Care (ASC) program, effective June 30, 2017. [Read our original report here.]

Cassels emphasized that while talks were ongoing between administration and UVic Child Care Services, the campus update was not the best place to debate the issue. Cassels did, however, stress that the issue was a “resource” one, and that the plan was to “optimize” the ASC while providing more hours for younger children.

The answer was not a popular one, and left the crowd in an awkward silence. Unfortunately for Cassels, his effort to defuse the situation didn’t seem to help.

“I didn’t mean to put completely put a damper on this conversation,” Cassels laughed. “I just don’t want to talk about child care anymore.”

A Vine account by the name of UVic Child Care Alliance, which has only one single post so far, posted a video of that particular quote online. The quote occurs around the 1:11:08 mark of UVic’s campus update video.

The full video of Cassels’ campus update is available at uvic.ca/current-faculty-staff/home/updates/.

We have chosen to leave the Vine, as we believe the creation of a UVic Child Care Alliance account to be newsworthy in and of itself.