Improv troupe bares it all with outrageous results 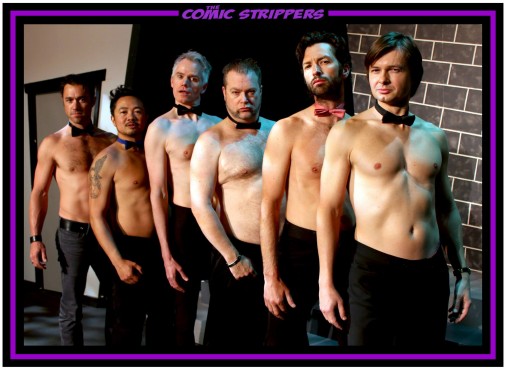 The Comic Strippers, an improv stripper group, brought their signature brand of entertainment to UVic on Nov. 14. Photo provided.

On my dad’s 58th birthday, I couldn’t be with him to celebrate. However, I was able to commemorate his special day in true middle-aged style by going to see a stripper show.

Well, okay: a comedy show about fictitious strippers. But the sentiment still holds.

On Nov. 14, I saw the Comic Strippers improv show at the Farquhar Auditorium. Surrounded on all sides by women of a median age of fifty, I was vaguely intimidated and acutely curious.

The premise of the Comic Strippers is that a troupe of strippers have perhaps been in the business too long. Feeling there is a lack of respect for their art, the men are now trying a new form of entertainment: improv comedy. In between audience prompted scenes, the lights fade and smoky pop music blares.

Also, they’re all named Chip, which gets pretty hilarious.

The Comic Strippers took every audience suggestion in stride, thinking on their feet and somehow making it work. The men presented good humour throughout the show, seeming happy just to be there with each other. Sometimes they seemed like young boys just screwing around for fun, rather than professional actors. The sheer delight they displayed on stage was what really made the show so amusing.

Also highly entertaining was the conscription of various volunteers. One such volunteer was Rob, a grey-haired computer programmer who was accused of being a stripper in disguise, come to steal the Comic Strippers’ moves. The actors invited him up on stage to learn their dance routine, and Rob made an intrepid effort to follow the Chips. He got so into the performance that he even took off his own shirt, whipping it around his head with an unbridled enthusiasm. Rob seemed liberated in that moment, just as the Comic Strippers are when they perform.

“You can have a place to just play, and let your imagination run. It’s pretend time,” said Roman Danylo, who plays Chip Rock, the front man of the Comic Strippers.

The actors certainly seemed to be having fun on stage. Friends for more than 20 years, the Comic Strippers are obviously comfortable with each other and are unafraid to get up close and personal. It was not uncommon for one Chip to slap another’s nipples, or slide between his legs. The physical comedy was just as great as the amusing banter. I really got the sense that all the actors were enjoying themselves: this was their idea of unadulterated (sometimes quite adult) fun.

I had never been to an improv show before, and I was definitely not disappointed. The Comic Strippers had one excellent scene after another, and kept the house laughing. They were well worth the watch, and I’d be sure to go see them again.