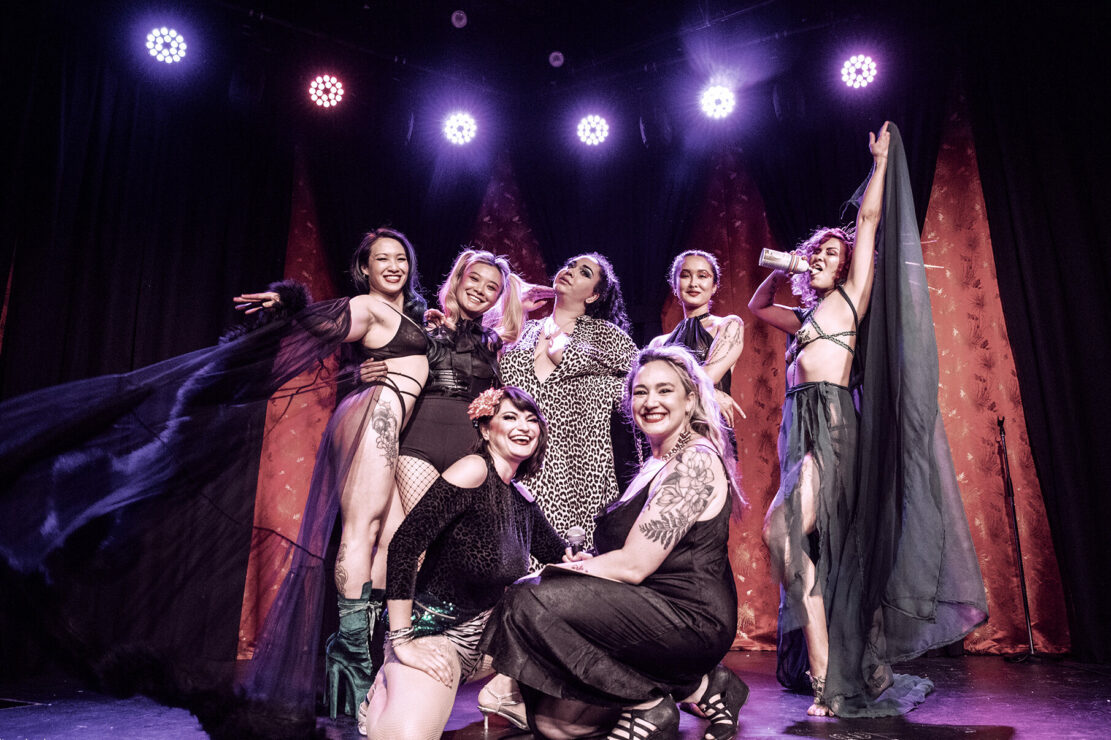 Melanin Magic, an all-BIPOC production company, performed at the Victoria Event Centre on June 16. It was a community-based show focussed on uplifting burlesque performers of colour, and providing a safe space for BIPOC, by BIPOC.

Burlesque itself can be anything that the performer wants it to be. As defined by Cherry Cheeks of Melanin Magic, “burlesque is a little bit of everything mixed into telling a story,” which can be funny, personal, or seductive. But all of this is told through the art of striptease, or reveals, as they are called in burlesque. The idea is that when the clothes are removed, something is revealed.

The performers that night were host Scarlett Hummingbird, Holly Shirt, Aquamarina, Luna Yen, Mx. Fox, and Rainbow Glitz, who was visiting from Vancouver. Melanin Magic was started up by Hazel Nuez in September of 2021, and is set to finish its first season this year.

With burlesque being such an individual-focussed performance art, all of the performers brought something new to each of their two performances over the course of the night. Luna Yen focussed on pole dancing in one of her performances. Aquamarina’s performance centered around ballet. Holly Shirt’s were humorous, appearing as a dinosaur and an ice cream vendor, with actual ice cream. Rainbow Glitz’s performances were more seductive, with a focus on the facial performance. Mx. Fox’s performance was focussed on very physical choreography.

But that’s also the point of burlesque.

“Burlesque is so much about self-expression,” said Cheeks in an interview before the show. “It’s one of the few where it flips on its head, there’s still that element of I want to entertain you, because you’re paying me, so you better have a good time, but there’s that freedom of if I want to be vulnerable on stage I can create an act that tells my story.” And for Melanin Magic, that focus is on creating a safe space for their performers to explore themselves.

Right before and during the pandemic, Cheeks saw a lack of BIPOC-oriented spaces where people of colour could celebrate themselves on their terms. Now, for Melanin Magic, this is where they can express themselves how they want to and be in a place where they feel safe and can call home, rather than fit onto other people’s stages.

And that focus on acceptance also doubles for the audience as well.

“If I’m in an audience, I want to see myself represented on stage,” explained Cheeks. “And with burlesque it’s really beautiful that there’s this mutual exchange of energy between the audience and the performer. Leaving it all on stage, with your clothes and your energy as well.”

Since Melanin Magic is a production company, they are able to make use of the freedom to select who gets to be invited to perform.

“Creating that connection and sharing that energy with the audience and saying ‘You are more than the oppression that you face over marginalization. You are more than any hardships you go through, whether you know your culture and language or if you’re just at the beginning, learning that, or finding your identity and where you come from.’ Fpor me it’s really important to say you are enough,” said Cheeks about Melanin Magic and burlesque.

“You’re still welcome here, and this is a place for you, whether you are on either side of that spectrum or anywhere, you can come.”