In review: Ms. Marvel is a revolutionary TV series for the brown community 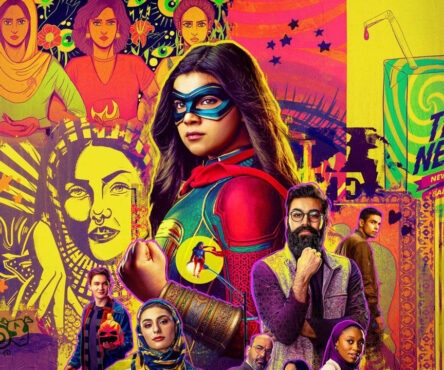 Representation matters. From my perspective, that is the message Marvel is embracing with the introduction of the Ms. Marvel superhero character and TV series.

For far too long, Muslims, especially South Asian Muslims, have been portrayed in a harmful and toxic manner in the American film-making industry. Thus, it is good to see new shows like Ms. Marvel where Muslims are not toxically misrepresented and stereotyped. Instead, in this show, Muslims are valorized and celebrated.

Ms. Marvel is not only groundbreaking because Kamala Khan, played by Iman Vellani, is the first-ever Muslim superhero, but directors and writers like Sharmeen Obaid-Chinoy and Bisha K. Ali are Muslims of Pakistani origin as well. Ms. Marvel represents a series made and set in the United States where the brown community can showcase their acting and film-making prowess.

No one could have imagined a decade or even half a decade ago that a brown Pakistani-Canadian woman would be a Marvel superhero. Some people may erroneously argue this is tokenism by Marvel, but I think it is a step in the right direction as Marvel is embracing the notion of representation.

Ms. Marvel is a BIPOC main character in Marvel, something that has been lacking in the Marvel cinematic universe until recently.

As for the first half of season one of Ms. Marvel, there is an apparent imbalance between the portrayal of Pakistani culture and action-packed scenes — the former overpowering the latter. However, this is understandable as it is vital to share Pakistani culture with the masses who have limited knowledge about this country in South Asia. I believe this approach was the only way to showcase Pakistan in a positive light in the show.

Almost all the Pakistani culture exhibited in Ms. Marvel is accurate. The ‘Aunties’ (a group of gossiping, busybody, middle-aged women), the insecurities teenage girls face as a result of the clash between Muslim culture and North American social norms, and wedding dances to Bollywood songs are all true.

However, there is one cringe-worthy moment in the first episode, which is not entirely accurate. Kamala’s father Yusuf (Mohan Kapur) storms into Kamala’s room and screams “Chak De Phatte” at the top of his lungs. This phrase, except maybe in some parts of Indian and Pakistani Punjab, is not frequently said in Pakistan.

Don’t get me wrong. I am not saying there is no action in the first half of Ms. Marvel; it just seems less than what you might expect in a typical Marvel movie or series. However, it is salient to note the significance of expressing Pakistani culture and the development of Ms. Marvel’s polymorphous powers, which overshadow much of the action in the first half of the series.

More specifically, the first half of the season forgoes using action sequences as a hook in favour of exposing us to Kamala’s personal life.

Do not worry action junkies, there are plenty of action-packed scenes with cars blowing up and people getting injured in the second half.

Towards the end of the third episode, Kamala fights the Djinn — nonhumans that belong to another dimension. The Djinn want to take Ms. Marvel’s bangle, the source of her superhero powers, by force so they can return to their realm. However, Kamala manages to fend them off.

Plenty of action takes place in the fourth episode, shot in Karachi, Pakistan, where fights between Kamala and the Djinn are blended well with the scenery of Karachi.

In another scene in the final episode of season one, Ms. Marvel and her friends fight the Department of Damage Control. During this confrontation, Ms. Marvel discovers she has the ability to embiggen and shapeshift. This was the moment Kamala realized the true scope of her abilities. Furthermore, I believe it is important to note that this scene reflects Ms. Marvel’s character development — from a teenage girl tired of gender inequality in her household and community to a woman who is independent and capable of defending herself.

Racial and gender equity is imperative in the Marvel cinematic universe. The creation of the Ms. Marvel series shows that Marvel is taking care to move in that direction.

IMDb rates season one of Ms. Marvel at a shockingly low 6.2/10. Why is this show rated so low? My answer to this question is, unfortunately, people are just not used to seeing a brown Muslim woman of Pakistani origin as a superhero. Marvel, historically, has been white-centric, and most people, especially older white people who are used to seeing white superheroes in Marvel comics and movies, want it to remain that way. However, I am hopeful that this backward-thinking mentality will change, and fans of the Marvel franchise will fully embrace a woman of colour as a superhero. Change never comes easily and quickly, but slowly and organically.

Considering the social and gender barriers that season one of Ms. Marvel breaks down, I will give it an outstanding 9/10 — contrary to the low score on IMDb.