In review: Official Competition is a comedy that never really ends 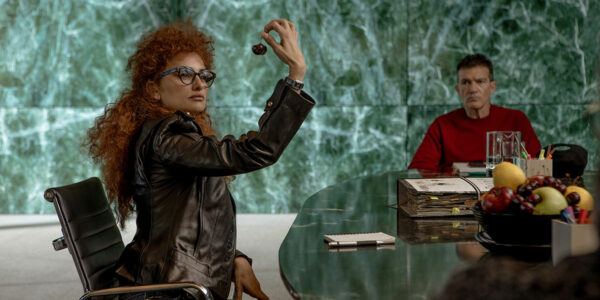 Humberto Suárez, a millionaire, has just turned 80. Now facing his own mortality, he decides to make a movie to help cement his legacy as someone worth remembering. To ensure that the movie is objectively great, he purchases the copyright of a Nobel-winning novel, and hires the eccentric director Lola Cuevas (Penélope Cruz), stage actor Iván Torres (Oscar Martínez), and international superstar Félix Rivero (Antonio Banderas). It was either that or building a bridge.

Official Competition, directed by Mariano Cohn and Gastón Duprat, is a comedy about making movies. Movies about movies have the tendency to be pretentious, just think of the dozens of Oscar-bait movies about how hard it is to work in Hollywood. What saves Official Competition from navel gazing is that this movie isn’t about the philosophical nature of art, or about how hard it is to create. It’s about ego-obsessed characters trying to justify their own philosophies to each other and themselves.

But the egos of the characters end up being both the movie’s greatest strength and its greatest weakness.

The inciting incident sees Humberto, played by José Luis Gómez, trying to make a movie simply in order to make himself feel better. Cruz’s character Lola comes up with elaborate ‘exercises’ for the two actors to do to make them connect with the characters more in script readings before shooting, such as hanging a giant rock over them or throwing trophies into a shredder.

Martínez plays your standard pretentious stage actor who thinks himself above it all, and wants an Oscar only so he can turn it down. Banderas as Félix is an unapologetically self-absorbed superstar. Out of the core cast, Félix is the most honest.

All the characters constantly talk about their philosophies during the script reading, but the two actors are subtly trying to one-up each other. Lola insists her exercises will help the actors with their characters, despite them being professionals who know what they’re doing. She even uses an exercise as an excuse to make out with Humberto’s daughter.

It’s engaging and funny at times to see these characters fight with each other as their professionalism begins to crack, but at the end of the movie it feels like the emotional payoff falls flat.

But that’s the point of the movie. Without going too deep into spoilers, Official Competition has multiple endings. There are several points where the movie could have ended and it would have felt satisfying. But instead it lingers, showing the aftermath of the movie, which hampers the emotional payoff where the movie parallels the movie within the movie. It ends on a close-up of Lola’s face explaining that a movie “never really ends.”

Sure, I get what Official Competition is saying, but it feels like it’s extending the point long after it has been made. It can definitely be argued that this movie is poking fun at pretentious filmmaking, but it keeps veering closer and closer to being pretentious itself. It reaches a point where there’s nothing left to be made fun of as the movie tries to earn its ending.

All in all, Official Competition is well-shot, well-acted, well-made satire that falls flat at the end. In other words, it’s a movie about making movies.