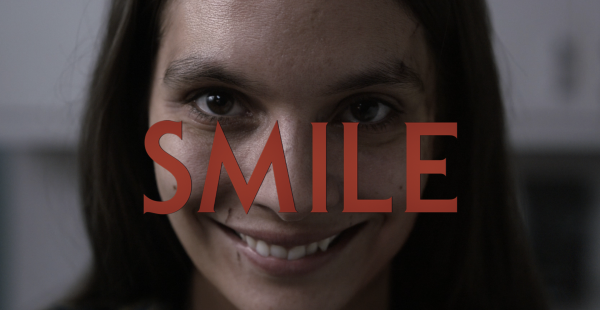 Smile is not unlike the many horror movies that came before it. If you’re a fan of the genre, you will probably find yourself wondering if you’ve seen some of these scenes before. Despite a total lack of originality, Smile does exactly what it sets out to do, and will probably have you walking out of the theatre with a you-know-what on your face.

Sosie Bacon stars as Rose Cotter, an overworked mental health professional in serious need of some time off. After witnessing one of her patients commit a horrible act, Rose learns that she has inherited a curse that starts to destroy her life.

While few of the supporting actors give stellar performances, Bacon keeps it all together as Rose, showing that it’s not only nepotism and her father’s (Kevin Bacon) legacy that’s landing her acting roles.

Smile is writer/director Parker Finn’s debut feature film, and it’s clear that he understands exactly what horror fans like — almost to a fault. Horror is a genre that has always relied heavily on tropes and clichés, but Smile feels like a trail mix made up of many of the popular horror films of the last decade and beyond.

The family drama and trauma storyline feels not only weak, but inspired heavily by Hereditary, as is much of the cinematography style. The concept of this kind of curse is obviously nothing new, but It Follows and The Ring did it first with much more punch. Even the creepy smiling faces, which are the main hook of the film, seem ripped right out of Blumhouse’s Truth or Dare.

The sound design throughout the film is a highlight, especially when viewed in a theatre. Creepy and strange sounds contrast the dead silence to create some true suspense. To appreciate this, Smile deserves to be played as loud as you can manage.

The cinematography and set dressing in the first act are much better than they have any right being for a movie like this. Rose works in a pastel-filled hospital that feels like something right out of a Wes Anderson flick.

Unfortunately, this well-detailed aesthetic does not continue throughout the bloated two hour-ish runtime. Transitions start to rely too heavily on an upside-down establishing shot trick, and the green screen in a particular driving sequence makes you wonder if there is any quality control being done for this production.

Putting aside all the nitpicks, flaws, and borrowed ideas, Smile achieves what a commercial horror film is supposed to do: consistently entertain and frighten. The overall goofiness of the film’s concept and marketing campaign — people staring with a “creepy” smile — does some disservice to just how disturbing some of the scenes can be. A monster design in one scene is undeniably inventive. While there is some suspense and psychological horror, the bread and butter of Smile’s scariness comes from shock value and jump scares, which are certainly not for everyone.

The jump scares do get slightly repetitive, but each one is still unique enough that it will have those who are faint of heart holding onto the edge of their seat. Anyone who feels squeamish around blood should probably steer clear of Smile, as there are some pretty brutal self-mutilation scenes throughout the entire movie. And not to spoil anything, but anyone who cannot handle animals dying should definitely pick something else to watch.

Movies are, more than anything, a form of entertainment. Not everything needs to be a masterpiece that will leave you questioning the deeper meaning for days afterwards. Smile will probably keep you entertained for two hours, just don’t go into it expecting something that will change your life. Finn has shown that he can write and direct a solid horror movie, but hopefully in the future he pushes to do something a bit more outside of the box.