In Review: “The Whale” sparks Brendan Fraser’s triumphant but controversial return to cinema

Darren Aronofsky’s new film tackles themes of grief, religious trauma, and addiction — but does it always hit the mark? 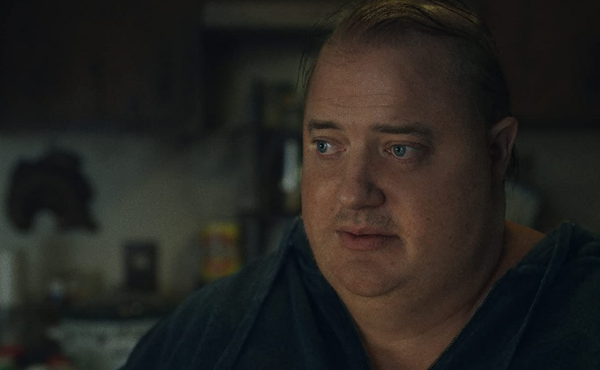 This past year has brought to light many conversations and controversies regarding the representation and portrayal of people living with obesity in cinema. From actor Tom Hanks in Elvis (2022) to actress Emma Thompson in the recent Netflix release of Matilda the Musical (2022) both donning fat suits for their roles, films in 2022 have sparked discussion around the inclusion of underrepresented body types in movies. Darren Aronofsky’s The Whale, for both its triumphs and failures, has not escaped this debate.

The Whale follows English professor Charlie (Brendan Fraser), a 600-pound man who routinely keeps his camera off when teaching his online classes and who obsessively re-reads a specific Moby Dick essay to slow his heart rate. After hearing that he has less than a week to live by his friend and caregiver Liz (Hong Chau), he attempts to make amends with his teenage daughter Ellie (Sadie Sink). Thrown into the mix is Charlie’s ex-wife Mary (Samantha Morton) who he left in order to be with his gay lover, as well as a young missionary named Thomas (Ty Simpkins) who is attempting to save Charlie’s soul before he passes away.

One of the major triumphs of this film is the acting, particularly Fraser and Sink’s. While he has acted in a few small projects recently, Fraser has mostly been out of the spotlight since his glory days in the late 1990s, when he starred in works such as George of the Jungle (1997) and The Mummy (1999). In 2018, Fraser emerged during the #MeToo movement to reveal that he was allegedly sexually assaulted in 2003 by Philip Berk, the former president of the Hollywood Foreign Press Association, causing him to withdraw from the public eye. The Whale has been Fraser’s big return to cinema and his performance is tear-jerking, playing Charlie with humour, passion, empathy, and heart. Sink is known for her past roles playing angsty, bitter teens, most notably as Max Mayfield in Stranger Things, and while her character in The Whale follows this trajectory, Sink takes it up a notch and does it well. Her work is infused with heart-wrenching and frustrating portrayals of a daughter who feels abandoned by her father and the deep hurt and resulting cruelty it brews.

Spoiler alert: this is not a fun, light-hearted family-night flick. The Whale wrestles with themes of religious trauma and the effects of grief, exploring them through Charlie and his lover’s inverse eating disorders, as well as the Church’s disdain for their sexuality. Yet it is not only Charlie who struggles with his circumstances. This film shows the complexities of grief, struggle, and shame and how it manifests itself differently in each character. Mary is an alcoholic, Liz cannot stop smoking, Thomas struggles with his dependency on weed and other drugs, and Ellie seems addicted to her anger, spewing words and vitriol that she sees will inflict the most hurt.

The mise-en-scène of the film is remarkable. With the exception of a few brief outside shots, the entirety of the film takes place within Charlie’s apartment. The viewer enters Charlie’s reality, becoming confined with him to this one setting, but Aronofsky’s cinematography never leaves the audience bored or the scenes static. The characters drive the film and the constant reveal of new rooms and hallways and of new nooks and crannies in the apartment, becomes exciting for the viewer to see unveiled.

One way that The Whale misses its mark is in failing to go further into Charlie’s motivations for refusing to go to the hospital, beyond some martyr ambitions for reasons that are revealed at the film’s climax. Obesity is a stigmatized condition in society, including healthcare. According to a journal article published by the National Library of Medicine, those who live with obesity are often victims of prejudice, pejorative remarks, and other systems of inadequate treatment in settings such as healthcare. Exploring these kinds of issues in Aronofsky’s film would have been a greater critique of society’s treatment towards those who don’t fit into certain body types and who aren’t accepted in our mainstream culture.

Additionally, The Whale continues the discussion around the importance of representation and inclusion of plus-sized actors in films and roles like this, rather than simply putting a fat suit on an established actor. While Fraser does a tremendous job with this role, he does don a fat suit for the film.

However, Charlie is a character far removed from the other examples we’ve seen in film this past year. Charlie is a multi-dimensional character that is at once complex, unique, frustrating, and loveable. While recognizing that the film is not perfect in its representation, The Whale is a step in the right direction towards deconstructing stereotypes and learning to put our feet in other people’s shoes.