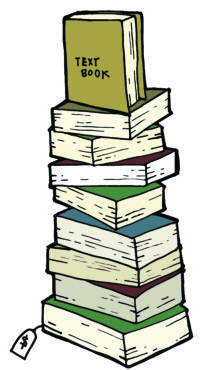 University students can all agree that tuition costs a lot, and that’s to be expected. But what most students aren’t prepared for is the exorbitant cost of textbooks. According to a 2017 article in Maclean’s, when it comes to average textbook costs at Canadian universities, UVic isn’t high on the list. Yet with a 2017 average of $780.94, we’re still paying a lot.

Alexandra Ages is a fourth-year History major at UVic. In her third year, she made her own textbook website for a Germanic and Slavic Studies course. Her website — Accessible Academia — is a collection of resources.

“It offers a guide to physical libraries here at the UVic campus as well as different online resources that have some degree of open source textbooks,” she says.

Ages created the website for a course, but her goals were rooted in a cause close to her heart.

“For me, it was really important that my year-end project — focusing on certain issues regarding media and social justice — was one that had really practical applications.

“As the coordinator of the Food Bank and Free Store, for me, a big part of my role has been seeing students interfering and working around a system that often isn’t made for them.”

Ages feels that the world of academia is somewhat exclusive, because you need to pay to play.

“When creating the website, my main goal was to try to find ways to kind of navigate that system when it exists often not only to not serve you but to actively stop your voice from being heard,” she explains.

There aren’t actually any books on Ages’ website, but she has included links to virtual and physical libraries.

“One of the big ones that is on the website — and that I also personally refer people to a great deal—is the physical library that is operated by the Vancouver Island Public Interest Research Group (VIPIRG),” says Ages. “It is totally free, it’s got a really wide variety of first-year textbooks in particular and it’s just an amazing resource to have on [the website] that not a lot of people even know exists.”

The other libraries listed on the site are less general. Many of them are “run by advocacy groups and therefore focus on issues relating to a certain demographic,” Ages explains. Her website also provides information about the UVic Food Bank and Free Store, which has a collection of textbooks available to students.

Ages feels that the world of academia is somewhat exclusive, because you need to pay to play.

Ages mentions that it’s very difficult to find free books online. This may have something to do with copyright laws.

“A lot of the libraries that I found were in very sketchy online places,” she laughs. “I don’t mean like the dark web or anything like that, I mean more just that they were really poorly designed and clearly run out of someone’s basement — not particularly user-friendly sites.”

Many websites hosting content in violation of copyright laws are taken down, and Ages feels that when it comes to making textbooks accessible for free, publishers may try to interfere by citing copyright infringement. She thinks that the companies will feel slighted because they won’t be making as much money.

“There’s a bunch of corporate people who I believe are purposely targeting students who are unable to pay for these [books] and who are kind of exploiting the industry as a whole,” says Ages. “I think that they will, if they’re able to, interfere with the project because anything that cuts into their bottom line is not something that they’re interested in.”

While open textbook websites are a start, Ages doesn’t think that it will be enough to really combat the textbook industry’s exploitation of students.

“I think that it is really connected with academia as a whole being an institution that exists only to serve the upper class. It’s not the case all over the world, but in Canada and the States, in particular, academia is the realm of people who have the luxury of being able to afford all of these little things that often aren’t initially calculated into the price of university.”

Ages emphasizes that the textbook issue is a small part of a bigger problem because “academia is seen as the only way to break out of the cycle of poverty. You can only actually get a decent paying job with a university degree, but it’s still fundamentally inaccessible to everybody below a certain income level and that income level [is still] quite high,” she says.

“I think that it is really connected with academia as a whole being an institution that exists only to serve the upper class.”

“A lot of middle-class students are not able to access institutions like the University of Victoria because they’re simply not able to afford it.”

Ages believes there are some ways that UVic could be better supporting students when it comes to the textbook battle.

“Quite frankly I think that the salaries of the upper ten to twenty administrators could be cut because honestly, it isn’t reasonable that they are making that sort of money while we have like 600 [students] a week accessing the food bank or while we have students…not being able to afford the basic textbooks that they need for their courses.”

Professors, she says, can also help by using academic materials that can be found in UVic’s online database.

“There are so many amazing resources and articles and books that are available for free to UVic students, and I would like to see them relying on that a little bit more [rather] than going out of their way to find other books and things that are not available at the library and that students then have to pay for out of pocket.”

When it comes to donating books, Ages is conflicted.

“I don’t think it should be on broke students to help other broke students.” If you’re able to donate, then you should, she says, but not if you need that money to pay your bills.

For Ages, the onus should be on “the people who are making these giant paycheques to recognize that what they’re doing is wrong, that they are profiting off people who are completely at a disadvantage here and they should be the ones stepping forward and helping out.”

If you’re looking for resources to help you save money, check out Ages’ website at www.accessibleacademia.wordpress.com. Accessible Academia is easy to navigate and it exists to support students.