“Legality is really about power, and not about justice.” 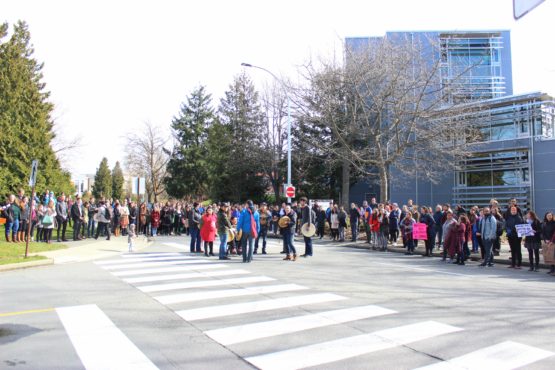 The final scenes of the march. Photo by Belle White, Photo Editor

Unity was the theme of the day as hundreds of University of Victoria community members walked around Ring Road holding signs, burning sage, and showing solidarity in protest.

Not to be confused with the student walkout for gun control also held on Wednesday, the march was organized by UVic’s Indigenous Law Students’ Association to demonstrate against injustices in the Canadian legal system for Indigenous people.

The walk was centred around the deaths of two young First Nations teenagers — Colten Boushie and Tina Fontaine. While Fontaine and Boushie’s deaths both resulted in trials, the acquittals for the accused white men in both cases saw outrage and frustration spread across the country.

Students, faculty, and community members gathered at the Murray and Anne Fraser building, which houses UVic’s Faculty of Law. Plenty came with signs, the majority of which touched on the injustices felt in the Canadian legal system. After territorial acknowledgements, singing, and thank-yous, the crowd of about three hundred people started their walk around a closed-down Ring Road.

The university had provided a notice on their website to alert students to Ring Road’s closure, though the notice didn’t provide context or reason for the march.

In an statement emailed to the Martlet, Jeremy Webber, Dean of the Faculty of Law, said the University of Victoria recognizes that students want to make a statement about the “important issue” of systemic discrimination in the Canadian justice system.

“The University of Victoria itself is committed to playing a positive role in advancing Canada towards truth and meaningful reconciliation,” said Webber. “We acknowledge the significance of the challenge and the great distance still to be travelled.”

Sarah Robinson is a first-year law student with ties to the Fort Nelson and Saulteau First Nations on Treaty 8 land in Northern British Columbia.

As a member of the Indigenous Law Students’ Association, Robinson helped organize the march.

“I certainly can’t speak on behalf of everybody, but I was marching to raise awareness about systemic discrimination in the justice system,” Robinson said after the march. “When Canada’s justice systems presents itself as impartial and objective, it becomes problematic . . . at the end of the day, our systems do not treat all Canadians fairly and do not reflect the diversity of Canadian worldviews nor legal orders.

“Residential schools were legal. The holocaust was legal. Apartheid was legal. Colonialism is legal,” Robinson said. “All of these instances demonstrate the ways in which legality masquerading as a justice system are really about issues of power, rather than about issues of justice.” 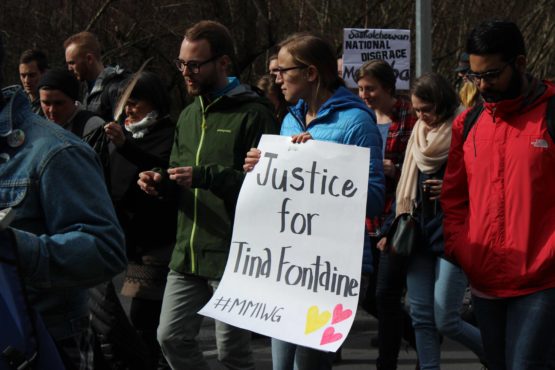 Robinson was pleasantly surprised at the number of people, Indigenous and non-Indigenous alike, out at the march. She encouraged students to continue the work of decolonization in the context of education and the legal system.

“I think at the student level there’s a ton of opportunity to take the initiative to learn about particular ways in which Indigenous people, peoples of colour, LGBTQ2S, ways in which different marginalized groups interact with the law and compare that to their own experience with the law,” Robinson said.

Alana Sayers is a Hupacasath PH.D student in the Faculty of Humanities at UVic and was present at the march. Carrying a sign that read, “Canada has never stopped killing Indians,” Sayers spoke to the importance of continual, visible protest.

“I think it’s important that these marches continue to happen so that it doesn’t go away, so that momentum continues,” Sayers said, mentioning how students should ask questions of their syllabi and professors to ensure Indigenous voices are being heard on campus.

“I think there’s lots of things that can always be done, even here at UVic,” Sayers said. “I think people think that decolonization is very inaccessible but it can be in everything that you do every day.”

Sayers, Robinson, and Webber all touched on UVic’s new joint Indigenous law degree, which is accepting students for its first term in September 2018. Students of the program will graduate with a degree in Canadian common law and another degree in Indigenous legal orders (the latter of which is known as the Juris Indigenarum Doctor, or JID).

To Robinson, the new program offers the opportunity for more diverse worldviews for people within the law system.

“[We’re] moving away from the Euro-Christian, colonial, male-dominated approach to law, which is rooted in really protecting the rights of property-holding white men, historically speaking,” Robinson said. “So the JID presents a wonderful opportunity to create new types of dialogue, and really think through the way that law affects different types of people.” 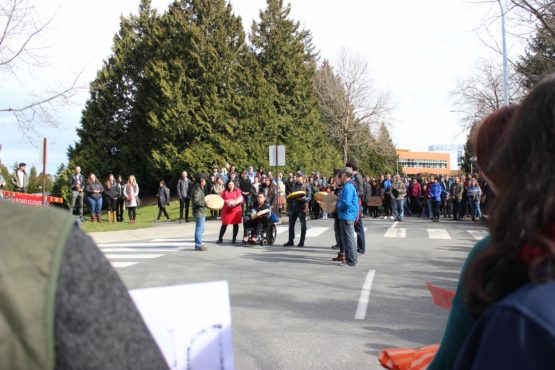 The end of the march, at McGill and Ring Road. Photo by Belle White, Photo Editor