Taiwo Afolabi’s journey to being named one of 11 finalists in the world for the Ellen Stewart International Award has been anything but smooth sailing.

“I experienced displacement myself back in Jos,” Afolabi says, talking about the Jos riots in 2010 that killed 326 people in his home country of Nigeria. “I was not in a camp, no, but I experienced what it means to be displaced.”

Witnessing these riots first-hand ignited Afolabi. He decided to use his passion for theatre to promote social change amongst those who have been displaced and personally affected by refugee crisis.

“When I was in Jos it was really tough. There were a lot of attacks,” he explains. “That was really an experience that stood out for me, to think how I can engage my art, to contribute in my own little way to my society.” 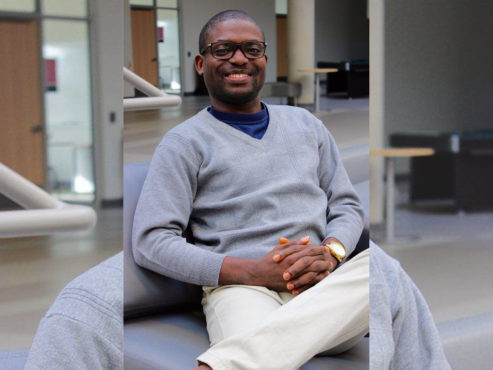 Taiwo Afolabi, a student in the Faculty of Fine Arts, is honoured to be one of 11 finalists for the Ellen Stewart International theatre award. Photo provided

The award, which is given given to artists whose work promotes social change and community participation with a particular focus on the engagement of young people, seems to perfectly describe Afolabi’s theatre career.

Afolabi’s nomination is the first time in the history of the award that someone from Africa has been nominated, and while Afolabi says it’s “peculiar” that he is the first, he takes pride in being that nominee.

The recipient of the Ellen Stewart Award is the candidate with the most votes from voters across the world, who they think does the best job of promoting social change and community participation.

Ultimately, the winner will attend the International Theatre Institute World Conference, receive an artistic residency at La MaMa Umbria where they can meet fellow artists from around the world to share and collaborate ideas, and earn financial and production support to present new work at the renowned Spoleto Festival of the Two Worlds.

After taking his undergrad at the University of Jos, Afolabi moved to Victoria to be a PhD student in applied theatre in the Faculty of Fine Arts.

Specifically, he cited his desire to work with decorated UVic theatre professor Warwick Dobson and to study how theatre can give an outlet to displaced people and giving a voice to internally displaced persons (IDP).

“My research focuses on IDPs and refugees, but precisely IDPs, because it is important to give them that visibility,” Afolabi says.

So far in his time here in the Victoria community, the theatre productions that Afolabi has organized haven’t gone unnoticed by the international community.

For example, Afolabi served as the artistic director for a theatre production last June on World Refugee Day that featured a group of refugees and immigrants in front of Victoria City Hall.

The performers in that play, In the Footsteps of Our Immigrants, had fled from a variety of countries including Syria, Israel, and Nigeria. In the play, they presented how they struggled with language barriers in Canada, dealt with culture shock, and adapted to life in Victoria.

Afolabi said for World Refugee Day 2018 on June 20 that he is currently working with the B.C. Arts Council and is planning on bringing ‘season two’ of that same production to Victoria City Hall.

It’s just important that we recognize that this is not about me, it’s about the great and amazing work done by a lot of people.

Despite all the glamour and popularity that comes with being nominated, Afolabi reiterated his passion to continue doing the work that got him to this point in the first place.

“I think for me it’s that sense of responsibility, for one’s work to be recognized at an international level, I think it’s beautiful. But with such honor, comes greater responsibility,” he says. “One has to continue doing the work.”

When asked what this award would mean to him, Afolabi considers it humbling. However, whether he wins the award or not, it won’t deter him from seeing his work progress.

“It’s really going to be an opportunity to really explore more, connect more, and to build more networks and relationships,” he says.

And Afolabi admits that this recognition for the award should not just be about him, but also the other ten nominees who have done their work to get to this point as a finalist.

“It’s just important that we recognize that this is not about me, it’s about the great and amazing work done by a lot of people,” Afolabi says. “In Ghana, China, Iran, the U.S., even here in Canada, among different age-grades, different institutions, NGOs, INGOs — it’s just understanding that award goes to them, and for me that’s where my joy lies.”