According to data collected by the UVSS Food Bank and Free Store between May and December 2018, of the 300-500 students who use the food bank weekly, 40 per cent are international students. At UVic, 18 per cent of students are international.

Alexandra Ages, Food Bank and Free Store Coordinator, originally announced these findings at the UVSS Semi-Annual General Meeting on Feb. 6, along with her belief that this figure is a direct result of UVic’s recent international student tuition hikes.

In 2018, UVic’s Board of Governors voted to increase tuition fees for incoming international students by 20 per cent for the 2018-2019 term, with a potential 15 per cent raise the following year. Current international students saw their fees elevated by four per cent, while domestic tuition increased by two per cent — the maximum increase allowed under university policy.

Prior to this vote, international student tuition fees made up 33 per cent of the university’s tuition revenue.

“In my time as coordinator, which started in August of 2017, I feel that the number of international students has risen dramatically,” said Ages. “A lot of that is based on anecdotal evidence, in that clients tell me that they are international students, but it’s nonetheless been significant.”

“I feel that many within the UVic administration have absolutely no idea what the lived realities of students actually are.”

Mateo Garcia, an international student, first got involved with the Food Bank after personally using their services. For the last year and a half, he was one of their Work Study employees, and now he volunteers with them.

In this time, he has seen a rising number of international students regularly using the Food Bank’s resources.

“I’ve seen it just being in the [Food Bank] and I’m also seeing it on sheets that we usually keep to log … how many people are coming and what are they taking,” said Garcia.

These sheets, which Garcia said anonymously records students accessing the Food Bank by their V-number, also keeps track of how many of these students are undergraduates or graduates, and international or domestic.

The data was tracked and stored electronically, until the laptop the Food Bank had been using recently became non-operational. They were not able to input the January records, but Ages expects the percentage has remained consistent with fall data.

Ages feels there are several reasons for the high percentage of international students using the Food Bank. Victoria’s high cost of living, the cost of textbooks, and the struggle to work enough to afford housing and education while in school are experienced by many students at UVic. International students pay more than double the tuition of domestic students, and lack the same support system of other students, even those from elsewhere in Canada. 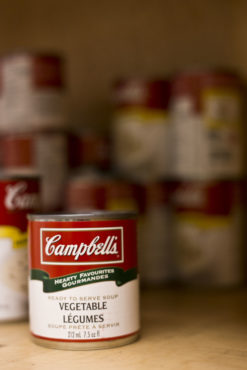 “I am speaking simply from my own experience and reflections, and not as a representative of the UVSS in saying this, but I feel that many within the UVic administration have absolutely no idea what the lived realities of students actually are,” said Ages.

“More broadly speaking, the fact that UVic has $39 million invested in fossil fuels, and millions more in other industries, but fails to invest in its own students’ futures, is incredibly disconcerting.”

“The reality is that [the Food Bank] shouldn’t be a necessary service.”

The only financial support the Food Bank receives from UVic are donations from the Division of Student Affairs’ annual “Stocktober” event, which provides large carts of food that Ages says she is “really, really grateful for.”

Jim Dunsdon, the Associate Vice-President of Student Affairs, helps to coordinate this donation as well as other support options for international students on campus.

”There’s a whole range of different supports that are put in place to both assist international students who experience some sort of unexpected financial change in their situation, and certainly we see that happening every year,” said Dunsdon.

“In order to get their study permit, [they’re required] to show that they have funds available to cover tuition fees, living expenses, return transportation — all of those things need to be provided to [the] government in order to be able to come and study in Canada,” Dundson said.

“Students coming to the university were aware at the outset of the costs that they would be required to pay.”

“UVic’s primary focus is to ensure they have resources available to support international students if their financial situation changes,” continued Dunsdon.

International bursary support is one of the biggest methods for UVic’s support — $250,000 total is made available per year, with the average bursary about $2,500.

According to Dunsdon, incoming first year international students were notified of the 20 per cent tuition raise (and that the university is considering another 15 percent increase for next year) prior to accepting their spot at UVic.

When asked about UVic’s role and responsibility in unexpected changes to student’s financial situations in recent years, Dunsdon repeated his earlier statement about international students having to prove their financial ability to cover tuition and expenses before coming to study in Canada.

“Students coming to the university were aware at the outset of the costs that they would be required to pay, and would have had to have shown proof of that in order to get a study permit,” he said.

Dunsdon suggested that he might follow up with the UVSS to make sure international students are being made aware of the support options available to them through UVic.

To Ages, there’s only so much UVic employees can do to help students, as she feels “those at the highest levels of the administration remain ignorant and unaware of what student needs
are.”

“The reality is that we shouldn’t be a necessary service,” said Ages. “Our dream would be to not need a food bank on this campus, but we do, unfortunately, and to see that usage rates are continuously rising is really, really disconcerting.”